Home > About the AMS > AMS Presidents 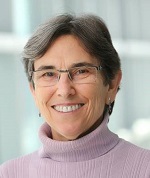 Ruth Charney is currently the Theodore and Evelyn Berenson Professor of Mathematics at Brandeis University. She was on the faculties of Yale University and Ohio State University before moving to Brandeis in 2003. She has served as chair of the mathematics department at both Ohio State and Brandeis.

Charney is a pioneer in the field of geometric group theory, the study of groups through their actions on topological metric spaces. She has made key contributions to the theory of Artin groups, non-positively curved spaces, and boundaries of groups. She has given plenary lectures on her research at several AMS meetings, including the 2018 Joint Mathematics Meetings, and she held a George Pólya Lectureship from the Mathematical Association of America from 2013 to 2015. She is a Fellow of both the AMS (2012) and the Association for Women in Mathematics (2017).

A mentor to many graduate students and postdocs, Charney has organized workshops and participated in numerous panels and events aimed at supporting early-career mathematicians in general, and women in particular. She served as President of the Association for Women in Mathematics from 2013 to 2015. In addition, she was on the Board of Trustees of the Mathematical Sciences Research Institute (1993-1995, 2007-2015) and she is currently a member of the Scientific Advisory Committee of the Centres de Recherches Mathématiques, Montreal (2016-present).