On June 28, 2017, Professor David Donoho, Anne T. and Robert M. Bass Professor of Humanities and Sciences and Professor of Statistics at Stanford University gave a briefing entitled “Blackboard to bedside: How high-dimensional geometry is transforming the MRI industry” for Members of Congress and staff on Capitol Hill.

Donoho explained how federally funded mathematical research transitioned in just 10 years from ‘brainiac’ math journals to FDA-approved medical devices. His Stanford patents on compressed sensing are licensed by both GE and Siemens in their new generation FDA-approved scanners. The improved technology will save lives, reach new demographic groups, and increase productivity in the use of healthcare resources.

The new technology is a game changer for medical care in at least three ways: 1) It decreases cost, allowing health care providers to deliver the same service to more patients in the same amount of time; 2) New populations can receive services. Children can now undergo MR imaging without sedation -- they need to sit still for 1 minute rather than 10 minutes; 3) It saves lives. Neurosurgeons can plan their surgeries and understand in advance what they will see three dimensionally inside someone’s head. Cardiologists can see in detail the motions of muscle tissue in the beating heart. 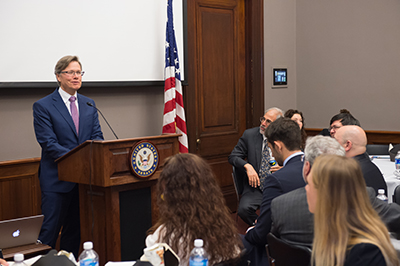 The increased benefit per dollar spent will result in better use of taxpayer funds, and the return on federal investment in basic science will be quite significant.

Tens of millions of MRI scans annually can soon be sped up dramatically; recent FDA approvals allow 8x speedups in 3D imaging and 16x speedups in dynamic heart imaging. Diagnostic imaging costs US$100 billion yearly and MR imaging makes up a big share of that.

Representative Nancy Pelosi and Senator Charles Schumer were on hand to give remarks and provide their support of the mathematical sciences and federal funding of basic scientific research. Read Donoho's Report.