Fourier Analysis is part of discussion at Capitol Hill Briefing

The American Mathematical Society (AMS) and the Mathematical Sciences Research Institute (MSRI) jointly held a Congressional Briefing entitled “From the Color of Birds to Nanomaterials and New Technology” on December 4, 2018 on Capitol Hill in Washington, DC. The briefing was given by Dr. Rodolfo H. Torres, University of Kansas (KU), who presented his collaborative work in the study of the anatomy and nanostructure of structurally colored tissues of living organisms, and to the analysis of the physical and mathematical modeling of the optical phenomena that produce such coloration.

Like a prism that decomposes a beam of light into a rainbow of colors, Fourier analysis transforms the geometrical arrangements observed in electron microscope images of tissues of living organisms into a mathematical rainbow of basic components. This "decoding/decomposing" process both deciphers and quantifies order and explains the coloration of nanostructured biological tissues. The research has explained the origin of the blue and green colors of birds and other animals and revealed the existence of intricate photonic crystal structures. These astonishing structures provide inspiration for research involving nanomaterials and has led scientists to new technologies in the fabrication of materials of highly saturated colors, adaptive camouflage properties, and efficient photovoltaic attributes with many applications.

Torres also used his presentation to illustrate how theoretical discoveries sometimes lead to applied and even translational research and technologies not originally envisioned, and how important is to support mathematical and fundamental research.

See video interview with Dr. Rodolfo Torres and highlights from the briefing here 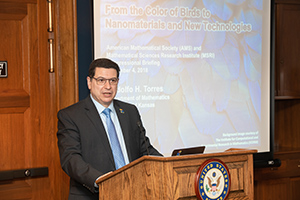 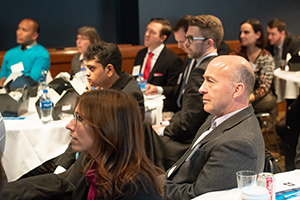 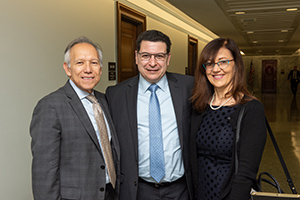 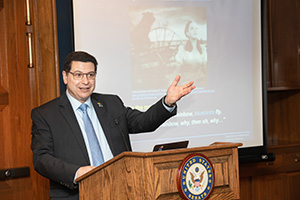