Mathematics at the 2004 AAAS Meeting 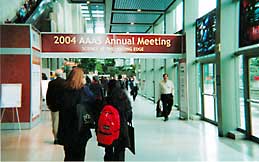 More than 6000 people attended the 170th Annual Meeting of the American Association for the Advancement of Science (AAAS) in Seattle, February 12-16. Below are some of the mathematics-related events that took place at the meeting. 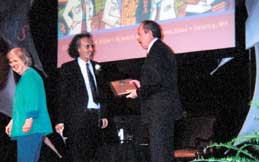 John Allen Paulos, mathematics professor at Temple University and adjunct professor of journalism at Columbia University, received the 2003 AAAS Award for Public Understanding of Science and Technology. Paulos is the author of Innumeracy, A Mathematician Reads the Newspaper, and A Mathematician Plays the Stock Market. He was honored for "his substantial contributions in promoting the pleasures of mathematics to large audiences." The AAAS Prize Booklet noted that Paulos "has been cited by cultural, business, and political commentators, and was even the answer to a Jeopardy question. He also served for two years on the editorial board of the Philadelphia Daily News where, as in his newspaper and ABCNews.com columns, he straddled the disparate realms of Pythagoras and Pulitzer." 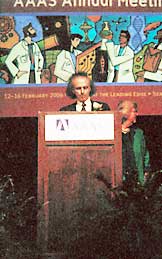 In accepting the award, Paulos said that recent movies and plays have made more people aware of mathematics, so that now "mathematics is almost cool." Paulos also said that "mathematics is not only essential to science but beautiful in its own right."

This symposium was well-timed: It took place on Valentine's Day. Three of the five authors of The Mathematics of Marriage: Dynamic Non-Linear Models were speakers at the symposium. They spoke about their collaborative efforts to identify which marriages will succeed and to help those that they identify as probable failures. Over the years the team has observed over 600 couples discuss topics of contention. During the observation, the team assigned a positive or negative number to individual's statements and expressions as the discussion progressed. From this data the researchers derived a graph of each person's accumulated "positive minus negative" score (actually the difference in the absolute values). The direction and steepness of these curves, by themselves and when plotted with the spouse's curve, allow the research team to classify the marriages as likely to last or not. Murray described the model in some detail and pointed out key parameters that therapists can concentrate on to improve a marriage. 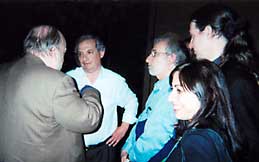 Christian Borgs introduced the speaker, giving a brief biography and calling him "a good mathematician and a really cool magician." Diaconis then delighted the standing room only crowd with his topical lecture, organized around Ten Interesting Things About Flipping a Coin. Perhaps the most interesting among the ten is that Diaconis, Richard Montgomery, and Susan Holmes found that a coin toss is biased towards the side that faced up when the coin was tossed. In fact, they found that the probability that a coin lands the same way that it was facing before the flip is over .51 . Coin-tossing is a basic experiment, which is assumed to be random. It is surprising that this assumption could be false and Diaconis concluded his talk by cautioning the audience to look closely at assumptions when probability and statistics are applied to real-world problems. In response to a question, Diaconis demonstrated that after years of practice he could control the outcome of a coin flip, but being a good magician, he would not reveal how.

In 1972, Lawton et al. proposed an approach for dealing with functional data – data that comes in the form of a function, curve or surface. They made the following assumptions: all individuals’ response curves have a common shape or "template," and that each individual’s response is some modification of this template. Mary Lindstrom summarized, and expanded upon, this "self-modeling" approach for functional data. She presented a statistical model for analyzing this type of information to determine the possibility of real differences between different groups of individuals, as well as variation within groups. Her applications included two-dimensional curves that tracked the movement of individuals’ tongue tips when each said a series of three similar words, as well as outlines of the corpus callosum among autistic vs. normally developing children.

If you have ever gotten a phone number from Directory Assistance or used a voice-activated telephone, you have experienced some of the Automatic Speech Recognition (ASR) technology in use today. But in order to move into the mainstream, ASR technology must be more robust in all operating environments, and it must be able to handle the complexity of natural, or conversational, speech with much less error. This includes the computer not just "recognizing" the words, but "understanding" the intention of the speaker. Presenters discussed some of the mathematics that has been used in the field of ASR, as well as new mathematical approaches that can take advantage of the increasing computational power of computers to capture more data for training ASR systems. Future applications of ASR technology include the use of verbal documents to store and easily access data. Also expected to emerge are new ways of working with computers, and – through computers – communicating with other people.

This symposium focused on the "community structure," or small-scale clustering properties of networks. After an initial summary of the topic and an introduction to networks, presenters discussed the social structure of Usenet (a network of topic-oriented newsgroups on the Internet) and other networks such as trust networks. They also presented new algorithms for finding community structure in networks, and efficient algorithms that address the question of which subset of individuals in a social network is the best to target to spread ideas or influence (Answer: it should contain individuals from different components of the network).

The speakers gave examples of the kinds of work currently being done in this field, which depends heavily on statistics and pattern recognition, as well as algorithms that can extract useful data out of otherwise unmanageable amounts of information. Topics of research included the use of probabilistic graphical models and kernel methods, which can be, for example, applied to the functional annotation of proteins or locating bugs in computer programs. A statistical modeling language was presented that can encode biological entities and processes, leading to a variety of insights. The application of hidden Markov models and mixture models to predict climate data was discussed. And the intelligent gathering of search engine query data on the World Wide Web was shown to improve the performance of future queries.

You can also read about mathematics at the 2003 and 2002AAAS meetings.