Mathematics Events at the 2008 AAAS Meeting

Over 7500 people attended the annual meeting of the American Association for the Advancement of Science (AAAS) in Boston February 15-18. Below are descriptions of some of the events related to mathematics that took place at the meeting. 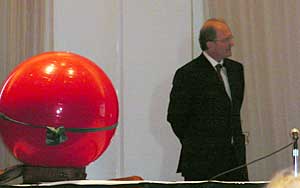 In 1870, August Möbius showed that two-dimensional surfaces could be characterized by their genus--the number of holes they have. (McMullen encouraged members of the audience to sort their kitchen utensils by genus, and see if others at home could guess the sorting principle.) Furthermore, these surfaces can be built using one architecture, or geometry. The sphere, of genus zero, can be built with spherical geometry. The torus, of genus one, is built with Euclidean geometry, and all other surfaces, with genus greater than one, can be built using hyperbolic geometry.

The situation for three-dimensional surfaces is more complicated. William Thurston's Geometrization conjecture states that every three-manifold can be built with one of eight geometries. In the 1980s, Richard Hamilton proposed a way to remold manifolds into "nicer" shapes. The process concentrates on points but yields a good global result. Surfaces in three dimensions can acquire singularities during the process but in 2002-3 Grigori Perelman showed that the process can be continued despite the singularities. These papers (linked from here) imply the Geometrization conjecture and thus the Poincaré conjecture. Although Perelman's papers are not published in a journal, many people have examined them over the last few years and McMullen said that he believed that Perelman's proof is correct.

Jensen described his Spatial Aggregate Fielding Evaluation (SAFE) statistic that gives a measure of how many runs a fielder saves or gives up in a season. Jensen has data on the location of every fair ball in Major League Baseball from 2002 to 2005. Based on whether the ball was a hit or out, he created a smooth curve for the average fielder at each position. The difference between each fielder's performance and the average is weighted to determine the SAFE for each player. Yankees' shortstop Derek Jeter, a three-time Gold Glove winner, finishes worst in Jensen's SAFE standings (and does with many other fielding statistics) but Alex Rodriguez, who was moved from shortstop to third base when he joined the Yankees, came out with a high SAFE rating in his shortstop years. Schwarz quoted noted baseball statistics expert Bill James, "Hitters are judged on results; fielders are judged on form."

Pinto uses a simpler model than Jensen's to try to determine a fielder's range. He gave a history of fielding statistics and noted that one of the most common statistics, fielding percentage, has consistently risen over time. He presented some interesting statistics: Major League Baseball's overall fielding percentage in 2007 was about .985, roughly 69% of balls put in play result in an out, and the most successful type of hit is a line drive.

Currently there are no well-known statistics for managers as there are for players. For example, most fans know that a hitter with 40 home runs is above average, but what about a manager who called for 50 pitchouts in a season? Is that a lot? No one in the audience knew, but it turns out that 50 pitchouts (by Tampa manager Joe Maddon) led the American League. 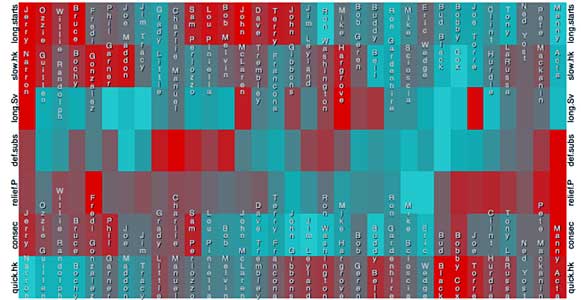 Wang encoded 20-25 moves by each major league manager in 2007, both offensive statistics (such as pinch-hitting) and defensive ones (such as leaving a starting pitcher in for a long time). With so many dimensions involved he used a colored two-dimensional plot to analyze the data and see if there were clusters of managers (as there would be clusters of offensive players--for example, power hitters vs. base stealers). In the figure above, the columns are managers, the statistics are rows. Low statistics are represented in blue; high figures in red. Wang didn't seek to say who was a good manager and who was bad, but rather to find similar types of managers. One thing Wang found: Grady Little, who was fired by the Boston Red Sox, was very close in the statistical analysis to Terry Francona, his replacement.

The panelists agreed that statistics have always been an important part of judging baseball talent, but statistics can't be the only basis for personnel decisions. They also wished they had more data, such as knowing where a fielder is positioned on each pitch. To those who would say that judgments can be made without statistics, simply by watching games, Wang pointed out that the difference between a .300 hitter and a .250 hitter is roughly one hit a week, which would be hard to discern simply by watching. 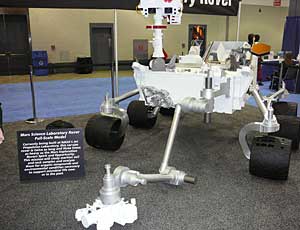 Also at the exhibits:
A full-scale model of the future Mars Science Laboratory

Coffin, whom Winkler called "the master of polyhedral puzzles," started making puzzles when he quit making fiberglass canoes and kayaks because of the toxic fumes. He uses some trigonometry and combinatorics when designing his puzzles, many of which involve misdirection. For example, to fit polygonal pieces into a rectangular tray, people will almost always try to line up the right angles of the pieces with the corners of the tray, so Coffin designs those puzzles so that the pieces won't fit that way.

Cutler writes computer programs to design and solve puzzles, even though he admits that computers take the fun out of both. He showed his software solving a two-dimensional "box-packing" puzzle. Cutler uses algorithms to, in effect, throw the pieces into the box at random, and then jiggle the pieces so they fit.

Van Deventer uses three-dimensional printers to turn combinatorial ideas into physical puzzles. He demonstrated some intriguing puzzles, such as those in which the moving parts are simultaneously moving through two different mazes, but saved the most intriguing puzzle for last. He called it Public Key. It is based on puzzles made of three interlocking pieces, in which any one piece can be removed, but once one piece is removed, the other two pieces are impossible to separate. He calls these "tricky triplets." So van Deventer wondered how to create a puzzle from this idea? He created two sets of tricky triplets, one made of white pieces and one of red. With the correct manipulation and exchanges of individual pieces from one set to another (in which at intermediate stages each configuration is a tricky triplet with two pieces of one color and one of the other), the solver can return to a solid white triplet and a triplet of solid red, but now when one piece (the key) is removed, the other two come apart! 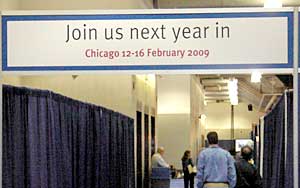 The 2009 AAAS annual meeting is in Chicago, February 12-16. The AAAS website has more information.