Mathematics Events at the 2009 AAAS Meeting

Over 6000 people attended the annual meeting of the American Association for the Advancement of Science (AAAS) in Chicago February 12-16. Below are descriptions of some of the events related to mathematics that took place at the meeting.

Mathematics of Origami: From the Joys of Recreation to the Frontiers of Research 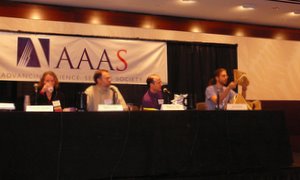 Speakers at the symposium on math and origami (left to right): Tamara Veenstra, Robert Lang, Thomas Hull, and Erik Demaine.

Tamara Veenstra (University of Redlands) began this well-attended symposium with her talk on an origami technique, Fujimoto's approximation technique, that leads to interesting mathematics. She uses origami in a general education course to motivate her students. This involves mostly topics from geometry, but other areas of mathematics are used as well. The Fujimoto approximation technique primarily relates to number theory and is used to divide a piece of paper into n equal parts (to fold an (n-1)-sided twist box). Folds to get to an even number of parts are easy, in that existing sections can be folded in half, but those involving an odd number of parts are hard. Veenstra showed a few examples of 4-sided and 6-sided boxes (involving dividing paper into fifths and sevenths), and led the audience to the conclusion that the difficulty of the folding depends on the order of 2 mod n.

Thomas Hull (Western New England College), who first interested Veenstra in origami, explained more about the different mathematical subjects that are used in origami. He characterized the mathematics used as "diverse and deep." Some of the subjects he mentioned are:

He concluded by saying that he looks at origami as a hands-on way to explore math, where the paper becomes a laboratory for experimenting and conjecture.

Robert Lang (Lang Origami) gave some history of origami and said that when mathematics entered the picture, the field opened up considerably as artists began to apply mathematical principles to origami. A propos of this, he noted that "the secret to productivity in many fields is to let dead people do the work for you." He showed some amazing creations that he's folded, including the two pictured above, and talked about software that helps artists create the folding pattern that will give the desired result. Origami is used in space exploration (folding telescopes for transport), automobiles (folding air bags), and medicine (for stents). Lang also noted that a paper airplane has been created, which some hope will lead to a paper airplane launch from space for a journey back to earth, that has withstood speeds of Mach 7 and temperatures of 400o F.

The discussant, Erik Demaine (Massachusetts Institute of Technology), summarized the symposium and showed some of his work in origami and in hinged dissections. A particularly entertaining application of hinged dissections, which Demaine showed on video, is a reconfigurable robot, similar to Tranformers.

The Mathematical Twists and Turns of Data Sets

Speakers in this symposium showed how some unexpected areas of math can help make sense of large data sets. For example, analyzing data using topology can give a good qualitative description of data. 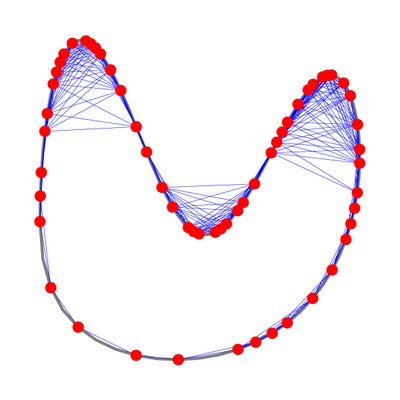 Shmuel Weinberger (University of Chicago) explained how topology can be used to detect the geometry that underlies a data set. Topology can help identify components or clusters in a set. The advantage of using topology is that its invariants are insensitive to small perturbations and so can be used to provide a global characteristic of a data set, such as its dimension. Topology can also help with adaptive sampling, in that not as many samples are needed at the smooth sections of the data space. Noise is still a problem, but Weinberger said that if the features of the set are large enough relative to the noise then it is possible to clean out the noise.

Gunnar Carlsson (Stanford University) gave the audience a glimpse into homology and how it relates to data. He showed a collection of A's and B's in different fonts. Humans can tell which letters are which very easily, but computers can't. Yet by counting the number of loops--each A has one loop while each B had two--without knowing anything about the letters, an analysis is possible. In general, can we develop automatic methods of pattern analysis that capture such traits? Carlsson explained Betti numbers, the simplest of which counts the number of pieces and loops in a space, and how to apply these numbers to data. Naturally, collected data, when plotted, won't form a known shape such as a sphere or torus and the set may have holes that are probably just noise. If one "fixes" the data by closing small holes, say of a certain width, then the induced connections may create artificial new holes in other parts of the data set. When these are fixed, other holes could be created. The idea is to keep the features that persist throughout the process. Carlsson concluded with a description of a data set of five million black-and-white digital images, which fit nicely into the four-dimensional Klein bottle. 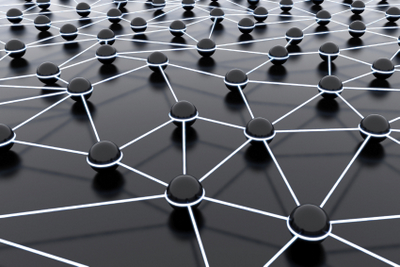 Image courtesy of the Institute for Mathematics and its Applications
for its 1/22/09 Math Matters Lecture by Robert Ghrist, Mathematics Making Sense of Sensors

Sensor networks generate a lot of data. Robert Ghrist (University of Pennsylvania) showed slides of the individual sensors all around us from our homes (e.g. the accelerometers in Wii) to cars ("door open") to stores (bar code readers), and even to restrooms (the sensors in faucets are infrared, so don't move your hands when a faucet doesn't turn on). Sensor networks, in which global conclusions are derived from the data from the individual local sensors, offer a mathematical challenge: How to make sense of all the collected data? Ghrist gave people an introduction to algebraic topology and showed how the Euler characteristic and integrals can identify the number of "targets" in data. He remarked that the session offered examples of branches of mathematics that may not be thought of as useful when the subjects began, but have applications now. Many people have heard that a topologist is someone who can't tell the difference between a doughnut and a coffee cup--Ghrist offered his take on characterizing topologists: "A topologist is someone who doesn't know the difference between a doughnut and one with a bite out of it [since the hole will still be there]," although would know the difference if there were many bites.

Mathematical Biology, the New Frontier: Educating the Next Generation

Laurie Heyer (Davidson College) began this symposium with a talk describing the freshman calculus course that she teaches, in which she uses many examples from biology. One example she gave involves blood vessels curling around a tumor (video viewable on YouTube). Calculus can show that the vessels branch out at an angle that maximizes the force. Even though many of the students in her course are pre-med, the course is open to all. Biology professors themselves have enrolled in the course, which Heyer said helped her and the course considerably. She is the co-author, with A. Malcolm Campbell, of a genomics text that uses a good deal of mathematics.

In the second talk, Jim Hayward and Shandelle Henson, both of Andrews University, showed how they involve undergraduates and mathematics in research into the behavior of sea gulls. It is much easier for undergraduates to do behavioral research than population research, because the former involves shorter time spans. Henson talked about all aspects of the models used: building them, validating them, and testing them. Papers from the research have been published. She pointed out that involving undergraduates is rewarding, but doesn't make the workload any lighter. 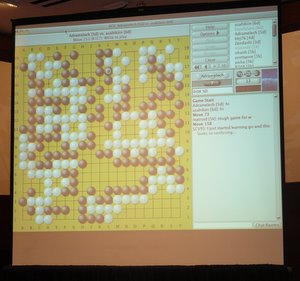 Image of software that plays Go

Elwyn Berlekamp (University of California, Berkeley), one of the founders of combinatorial game theory along with John Conway and Richard Guy, began this symposium by talking about Go and his efforts to try to put numerical weights on Go moves. Go players often say that a particular move is big (or small) and another move is bigger, but they are reluctant to specify exactly how big a move is. So Berlekamp created Coupon Go, which allows players to choose number-valued coupons that are added to their scores, instead of moving. This has helped him evaluate Go moves. He also explained end-game analysis of Go, and finding winning strategies that even the best players miss.

In his lecture, Robert A. Hearn (Dartmouth College) also talked about Go. He first noted that computers are much better than humans at checkers, a little better at chess, but not as good as humans at Go. Computer performance vs. humans at Go has improved recently, however. Earlier in the month a computer with a seven-stone advantage beat a 9-dan player (the top level), and that day a computer with a six-stone edge defeated a 1-dan player. Hearn and other experts estimate that it will be about 20 years before a computer will beat a 9-dan player in a realistic game of Go.

Science for Public Confidence in Election Fairness and Accuracy

The three speakers in this symposium spoke on elections from three points of view: computer science, statistics, and political science.

Ed Felten (Princeton University) said that the fundamental problem with voting using computers, which are called direct recording electronic (DRE) devices, is being able to know that there is a one-to-one correspondence between voters and ballots (so that the count is accurate), while ensuring that no one knows what that correspondence is (so that the ballots are secret). Often people ask why we can't apply the kind of methods used with ATMs to voting. Felten's answer is that ATM transactions involve many records (you get a receipt, the bank has a written record, and a picture is taken) that would be impossible for voting. In 2006 he and his students acquired a DRE and found that malicious software could:

Felten is not confident in DREs but said that improving them is an active area of research in computer science. He felt that the best existing voting method uses an optical scan machine at the polling place.

The 2008 Mathematics Awareness Month website has more essays and information on the math and statistics of voting.

The 2010 AAAS annual meeting is in San Diego, February 18-22. The AAAS website has more information.