Mathematics Events at the 2011 AAAS Meeting

The 2011 annual meeting of the American Association for the Advancement of Science (AAAS) took place at the Washington Convention Center in Washington DC, February 17-21. The AMS held its contest Who Wants to Be a Mathematician as part of Family Science Days, and hosted a booth in the exhibits area. Below are descriptions of some of the events related to mathematics that took place at the meeting.

The AMS was the only mathematics organization hosting an exhibit at the meeting. The exhibit included AMS posters (among them "Women Doing Mathematics and "Powered by Math"), the Mathematics Awareness Month 2011 "Unraveling Complex Systems" poster; Mathematical Moments; selected AMS books (including What's Happening in the Mathematical Sciences, Volume 8, A Mathematical Medley, and Modelling in Healthcare); the 2011 Calendar of Mathematical Imagery; and resources for high school and undergraduate mathematics students and faculty. Visitors to the exhibit included scientists, press, post-secondary and secondary teachers, and Family Days participants. Many of the latter picked up materials to bring back to colleagues and students, and were pleased to learn about the existence of summer math camps for talented mathematics students in the U.S. and Canada.

Symposia: * Growth and Form in Mathematics, Physics, and Biology * Mathematics and Collective Behavior * Using Quantitative Content Analysis to Assess the Likelihood of Terrorist Violence * Mathematics and Our Energy Future * Science Without Borders: Learning from TIMSS Advanced 2008 * Teaching and Learning in the Digital Age: Reliable Resources Across the Disciplines

Growth and Form in Mathematics, Physics, and Biology 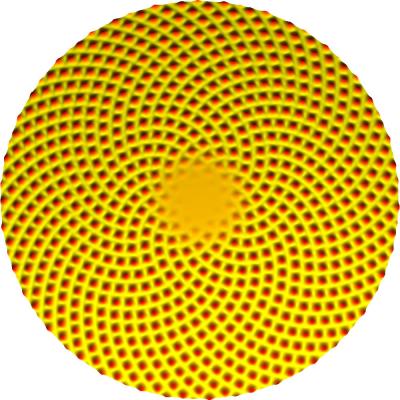 This symposium marked the 150th anniversary of the birth of mathematical biologist D'Arcy Thompson, whose 1917 book On Growth and Form argued that biological forms, such as the patterns in sunflowers, are due more to the laws of physics than to evolution.

L. Mahadevan (Harvard University) talked about how cellular tubes, such as those in grains of pollen, grow and how tubular tissues, such as those in the stomach, loop. Cellular tubes look like fingers and grow at the tip rather than along the sides. This can be explained because viscosity is small at the tip but large along the sides. Gut looping was once thought to be a packing problem, but Mahadevan has found that the growth of the tube being faster than the growth of the tissue connecting it to the body can cause looping. Mahadevan used a physical model to show how the stretching and relaxing of membranes attached to the tubes cause the tubes to loop.

Alan Newell (University of Arizona) spoke on more general patterns in nature, such as fingerprints, sand dunes, and stripes on fish. He's found that patterns arise from biochemical processes when instabilities occur and a system's symmetry is broken. Newell said that similar patterns arise because the underlying systems, no matter how different the phenomena, have similar symmetry.

The last speaker, Yves Couder (École Normale Supérieure, Paris), contrasted isotropic and anistropic growth in plants. Algae exhibit istropic growth at the cellular level, in which tip-splitting is common and equal-lengthed fingers develop, whereas vascular plants exhibit anisotropic growth, in which growth occurs more in one direction than others. His conjecture is that mechanical stresses cause anisotrophic growth. To try to simulate what happens naturally, his team did experiments applying artificial stress to systems and found that microtubules aligned as expected. 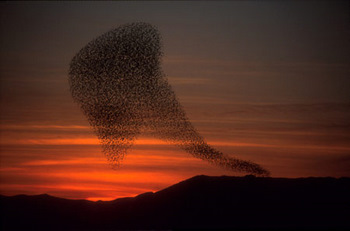 Iaian Couzin (Princeton University) began the symposium by describing how information is shared in groups, for example, how a swarm of bees finds a good nectar source. He studied information transfer using simulations with a group of 200 "individuals." In such a group, even when only 5% of the group have knowlege about where to go, the group will still follow, even though there are no designated leaders in the group. If two small groups within the larger group have different ideas about where to go, the group will head in the average direction when the angle between the two directions is less than 120°, but when the angle is 120° or more, the group will split in two along the two different paths. (Photo by Jose Luis Gomez de Francisco.)

Couzin also talked about migration. His group has found that individuals surrender some of their detection abilities (which have a cost) and move with the group. Once these abilities are surrendered, they are hard to recover. So, for example, in Northern Canada, hunters don't kill the leaders of a migrating group so that the group can still move effectively. Also, if a species' migration route is distrubed because territory is fragmented, it is amost impossible to restore the route.

Readers may be more familiar with the collective behavior associated with humans in cars. Anna Nagurney (University of Massachusetts Amherst) talked about congestion in networks, especially traffic on roads. It is estimated that the cost of being stuck in traffic is about $100 billion per year in the U.S. There are two types of networks: user-optimized, in which individuals make their own decisions based on what is best for them, and system-optimized, in which the decision-making is centralized. Problems in the latter are large-scale and non-linear. She cited examples of Braess's Paradox, in which adding a road increases traffic, including one from Seoul, where, in 2002, a six-lane road was removed and traffic decreased. Nagurney has derived a unified network performance measure to study which nodes and links in networks really matter to the system's performance.

The goals of the researchers in this symposium were to use statistics to distinguish terrorist groups from radical, non-violent groups, and to see if their methods could identify when a terrorist group would strike. Luke Conway (University of Montana) measured the complexity of texts released by terrorist groups, while James Pennebaker (University of Texas at Austin) analyzed the use of function words (e.g. articles, prepositions) versus content words (e.g. nouns, verbs). Both methods did well distinguishing violent groups from non-violent groups, but not as well predicting when the former would strike. Conway and Pennebaker both analyzed translations of original documents and although they had confidence in their results, they wished they had access to the originals.

Mathematics and Our Energy Future

Martin Bazant (MIT) talked about modeling phase transformations in lithium-ion batteries, especially on the atomic scale. He explained the physics of such batteries and showed experiments at the nanoscale. He said that modeling on such a small scale is a very rich area of research and one in which much work needs to be done. Bazant's experiments suggest surprising behaviors, such as the formation of waves of lithium ions inside the electrodes. (See recent talks on the subject by Bazant and members of the Battery Modeling Group.)

Keith Promislow (Michigan State University) continued on the nanoscale, describing tiny networks and their impact on efficient energy conversion--especially ion channels, which are a common thread in efficient energy conversion. His talk focused on fuel cells. Modeling nanoscale interactions within cells can take thousands of years of CPU time, so he is using elementary differential geometry to simplify the models and make good simulations feasible. (Images of co-dimension 2 pearled networks by Zhengfu Xu and Nir Gavish, courtesy of Keith Promislow.) 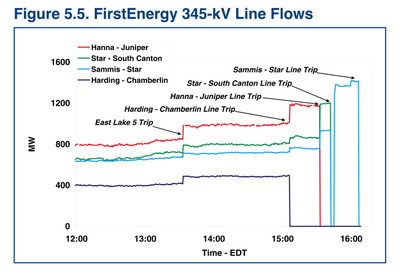 Ian Dobson's (University of Wisconsin-Madison) talk was on a much grander scale: widespread blackouts. All power systems east of the Rocky Mountains are connected in one network with about 100 control centers. People in the control center monitor performance and adjust loads as needed. Cascading failures occur when components in a heavily loaded system take over for other failed components, and then they themselves become weak and eventually fail. One such example is the blackout of Augst 2003, which affected about 50 million people (diagram of line failures at left). A curve fit to data relating the size of blackouts to their frequency obeys a power law, so that large blackouts are rare but should be planned for. Dobson concluded by noting tht the power network is not static, but evolves through adjustments by power companies. (Image from 2004 report of the U.S.-Canada Power System Outage Task Force. Click on it for a larger version.)

Alka Arora (International Study Center) gave an overview of TIMSS (Trends in International Mathematics and Science Study) Advanced 2008, which was designed to assess the learning of final-year students in advanced math (algebra, geometry, and calculus) and physics. Ten countries participated, but not the U.S. Some of the conclusions are that the number of students enrolled in such courses and the achievement of such students is disappointing. Also, few students in the courses indicated that they planned to choose education as a career goal, so that there could be even more of a shortage of qualified teachers when current teachers who are close to retirement do retire. The next study will be in 2015.

Teaching and Learning in the Digital Age: Reliable Resources Across the Disciplines

Speakers from several subjects presented web resources in their disciplines. Lang Moore (retired from Duke University and current executive editor of the Mathematical Sciences Digital Library, MathDL) talked about MathDL, first giving a history of the resource and then showing people what it has to offer, including Math in the News and Loci. Moore said that the site will soon have resources organized by subject. The first subject is calculus, then followed by differential equations.

The 2012 AAAS annual meeting will be in Vancouver, British Columbia, February 16-20. The AAAS website has more information.