About 3000 people attended the 7th International Congress on Industrial and Applied Mathematics (ICIAM) at the Vancouver Convention Centre July 18-22. Below are links to summaries and pictures of some of the events that took place at the congress.

Arvind Gupta, CEO and scientific director of Mitacs, and Rolf Jeltsch, ICIAM president, began the congress by welcoming the attendees from more than 70 countries. After the welcome, the following prizes were awarded by Alistair Fitt, ICIAM secretary:

Following the prize ceremony, First Nations people danced and explained their heritage. Part of that heritage is the talking stick which was passed to speakers at councils. Gupta presented Jeltsch with such a stick near the end of the ceremony. Throughout the remainder of the meeting, organizers presented plenary lecturers with a smaller version of the large stick. 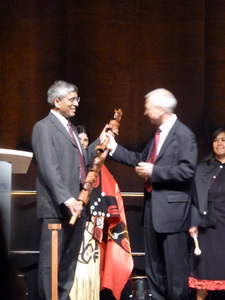 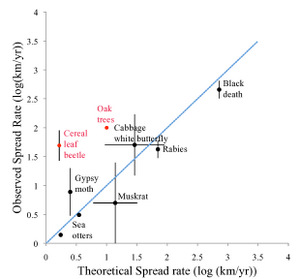 In this plenary lecture, Lewis described both the history of modeling plant and animal invasions and the current work in the subject. A model independently derived by R. A. Fisher and Andrei Kolmogorov in the 1930s is a second order non-linear partial differential equation relating the rate of change in the density of a species to its growth and dispersal. This model works pretty well but fails for many species, such as the cereal leaf beetle and oak trees (after the last Ice Age), because of long-range dispersal. For example, the beetle is spread by wind and so population density jumps in places unaccounted for by Fisher and Kolmogorov's model. In these cases, the model is more complicated. Lewis also explained conditions under which the non-linear models can be linearized and said that determining if linearization is possible is an active area of research. (Graph of observed vs. theoretical spread rates courtesy of Mark Lewis.)

The Vancouver Convention Centre is a beautiful facility situated on the shore of Coal Harbour. The exhibit space was on the centre's second level, with windows facing the harbor. ICIAM served refreshments in the exhibit area during the half-hour morning and afternoon breaks, drawing many attendees to socialize and visit the booths. The AMS displayed books in applied mathematics on sale at a discount for attendees, AMS posters and Mathematical Moments that promote awareness of applied mathematics, the new AMS t-shirt with vintage logo, and information on AMS programs and services, such as employment services, fellowships and travel grants, and prizes and awards for mathematicians and students in applied fields. When the exhibits closed, students lined up for the "Book Grab," at which they could obtain free books donated by exhibitors.

Minisymposium and Plenary Lecture related to the Gulf Oil Spill

The BP Oil Discharge, the Search for Energy and its Consequences

*Minisymposium organizer Ben Fusaro (Florida State University) examined the discharge rates claimed by BP before the well was capped and noted that since fines are based on the amount spilled, BP had no incentive to be accurate. He showed some unbiased estimates, which were much larger than BP's and eventually shown to be closer to the truth. Fusaro then looked at the larger picture of why oil use is so prevalent. It does have a high energy density and is easy to transport, but because it is now harder to find than it was, say 75 years ago, its energy return on investment has decreased dramatically. 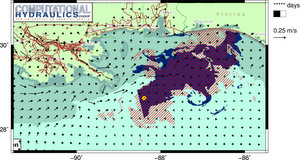 *Clint Dawson (University of Texas) used his model that was developed for predicting storm surge on the Gulf Coast to help forecast where the surface oil would go during the spill. He also showed slides of where the oil may have gone had a major hurricane struck the Gulf at the time. Dawson said that had this happened the model showed oil would have inundated the coast from Southeast Louisiana to Texas. He concluded by saying that his model was very sensitive to the quality of satellite imagery (which was often unreliable because of cloud cover) and that working with the government on this spill would make it more likely that people in power would pay better attention to models in the future. (Image of model's predictions, in red, for June 30, 2010 along with satellite imagery of the spill, in blue, courtesy of Clint Dawson.) *Mac Hyman (Tulane University and Los Alamos National Laboratory) emphasized that "we need a lot more people working on these problems," both to predict the course of a spill along with its ecological impact, and to enter the "decision loop." Currently crews are still cleaning along the Gulf Coast but are told not to clean below 1/4" of sand. That is, "out of sight, out of mind."

Bertozzi began her plenary lecture, which concerned what happens when oil and sand mix, by saying that undergraduates who knew differential equations could do some of the modeling in this area. This is a long history of research into water-particulate mixtures, but not into oil-particulate mixtures. Furthermore, beach sand has some water in it, which means oil behaves differently than it would if the sand were completely dry. Bertozzi showed several videos of experiments done in her lab involving different particle densities and different angles of inclination for the sand. She said that in her experiments there is a bifurcation between when fingers of mixture form and when ridges form.

On Thursday afternoon, a prizes and awards luncheon was held. Pictured above are many of the prize and award winners, who are all listed below. In addition, the 2011 class of SIAM Fellows was recognized.

Daubechies started by saying that John von Neumann was a "personal hero" of hers and if she could choose one person from the past to meet and talk with, she would choose von Neumann over Einstein. During the lecture she said that sparsity has had an emerging role over the last four decades, for example, in digital imagery, and noted that people are beginning to glimpse some very important things in the subject. Daubechies contrasted representing images using Fourier transforms with representing them using wavelets, as is done with the JPEG 2000 standard. Despite the use of wavelets in this recent standard, wavelets have not had much impact on consumer products. One evening, however, Daubechies happened to be watching ESPN and noticed characteristics in the video highlights that prompted her to conclude that wavelets were used in the videos. Now compressive sensing has been developed to acquire an image sparsely. (Hear Emmanel Candès talk about compressive sensing.) 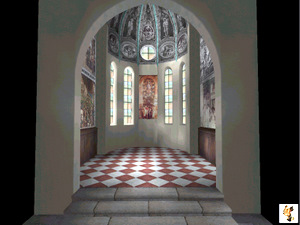 The church as it looked before the bombing

In 1944, during World War II, the Allies bombed the Eremitani Church in Padua, Italy reducing the frescoes inside the church to rubble. Fornasier is using math to try to place some of the tiny pieces and restore the frescoes by Andrea Mantegna, which have been characterized as the "first steps from Medieval times to the Renaissance." There are more than 100,000 fragments involved, collected in over 100 boxes. Fornasier and his team cleaned many pieces, photographed them and put the images on more than 30 CDs. These small images are compared with images taken of the frescoes before they were bombed to find where the pieces fit. The images are decomposed using circular harmonics, which are rotationally invariant and best suited for maneuvering to find the possible locations for a piece. Once candidate locations are identified, humans make the final decision about where a fragment should be placed. Fornasier begain with only about 10% of the original fresco but his work has served as a significant starting point for the physical restorers. Read about the project (in Italian). (Images courtesy of Massimo Fornasier.)

Public Lecture: Math In and Out of the Zoo, Chris Budd (University of Bath)

Budd (pictured above) designed his lecture to answer the questions:

and to show that "good math really is everywhere." He described a few situations in which math has helped model problems connected with animals, and often animals in the zoo. One of those occurred at the Bristol Zoo and involved incubating penguin eggs. Zookeepers steal eggs from penguins to encourage the mothers to lay more eggs. Yet the man-made incubation of the eggs had a high failure rate. Penguins rotate the eggs and the prevailing opinion was that this is done so that heat is distributed evenly. Math modeling based on the heat equation showed, however, that this is not the case because eggs without rotation remained uniformly heated after about 20 minutes. Research into the problem found that rotation actually dispersed nutrients between the yolk and the portion of the egg where the penguin develops and removed waste material. Once these facts were known and incorporated into the incubation process, success rates rose to 90%. In another example, Budd talked about using math to look inside a bee hive (without using smoke) and figure out what is destroying bee populations. He said that this is done with CAT scans, which depend on the results of Johann Radon obtained in the early 1900s. Budd noted that this research finding its application 60 years later is a "good lesson for grant awarders."

In his plenary lecture, Ghil explained why the climate system is highly complex and highly non-linear, incorporating the atmosphere, ocean and ice sheets on many space and time scales. Modelers go back and forth between simpler conceptual models and detailed, realistic modes, as well as between models and data. He talked about uncertainties in the models and how perhaps to fix them by using measure theory and dynamical systems. Ghil concluded with these two questions and partial answers:

Mathematics and Statistics in Climate Data Reconstruction and Uncertainty

Speakers in this minisymposium spoke about uncertainty in climate data and the difficulties in recovering data from sources such as tree rings and ice cores. Such data is called proxy data. Regarding the former, Julien Emile-Geay (University of Southern California) said that even when we have measurements, the data can not be relied on. He showed several methods that can be used to remove noise from data sets to obtain more reliable data. Regardin the latter uncertainty, Michael Mann (Pennsylvania State University) noted that using proxy data is an inverse problem: trying to determine climate based on, for example, tree rings, which were caused by the climate. He hopes to model how proxy data responds to climate in a way that allows us to better understand the climate.

The 8th International Congress on Industrial and Applied Mathematics (ICIAM 2015) will take place in Beijing.

Some of the sights