Highlights of the 2004 Abel Prize Ceremony and Festivities in Oslo, Norway 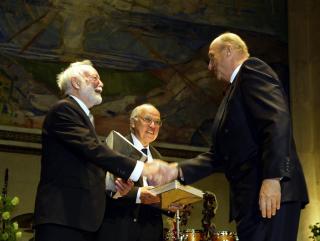 May 25, 2004: With the backdrop of Abel Prisen banners lining the main boulevard of Oslo, prize ceremony attendees walked up the steps of the University of Oslo Aula to trumpeted fanfare as city spectators gathered on the plaza. There, in this historic and impressive building, Norway's King Harald would present the 2004 Abel Prize to Sir Michael Atiyah (University of Edinburgh) and Isadore Singer (Massachusetts Institute of Technology). The setting was a grand hall, adorned with wall murals by Norway's renowned artist Edvard Munch, and filled with guests from around the world. The musicians heralded the event with a festive composition, and after all were seated Their Majesties King Harald and Queen Sonja entered the Aula.

Lars Walløe, President of the Norwegian Academy of Science and Letters, made the opening remarks.

"In 1898 the Norwegian mathematician Sophus Lie argued for the creation of an international mathematics prize in Niels Henrik Abel's name... [In 2002] the Abel Prize was created by the Storling, Norway's parliament, for the purpose of rewarding outstanding research in mathematics. It was also created with the expectation that such a prize, with the interest and attention it would hopefully attract, would encourage individual researchers and research communities worldwide. It is also intended to arouse the interest of the young in mathematics and related scientific subjects. Therefore it is also a pleasure to for us to have the winners of a major maths contest for young people in Berlin and a related contest in France here with us as our guests. Once again, honoured guests, I welcome you to this ceremony and to the other events in conjunction with the awarding of the prize."

Erling Størmer, Chairman of the Abel Committee, then gave the citation of the shared award to Atiyah and Singer:

"[Atiyah and Singer] are receiving the prize for having discovered and proved the index theorem, which links together topology, geometry and analysis, and for playing an extraordinary role in building new bridges between mathematics and theoretical physics... The index theorem was proved in the early 1960s and is one of the most important mathematical results of the twentieth century. It has had an enormous impact on the further development of topology, differential geometry and theoretical physics. The theorem also provides us with a glimpse of the beauty of mathematical theory in that it explicitly demonstrates a deep connection between mathematical disciplines that appear to be completely separate... Sir Michael Atiyah and Isadore Singer have demonstrated mathematics at its very best and are worthy winners of the Abel Prize."

His Majesty King Harald presented the Abel Prize to Atiyah and Singer, and each winner gave a speech of thanks--to the Norwegian Academy, to the King, to their supportive families, and to colleagues past and present. Each acknowledged their friendship and collaboration, and mentioned the importance of encouraging and supporting the next generation of mathematicians. Their words, and indeed their histories and far-reaching index theorem, certainly dispelled any misperception that mathematics is a solitary and unrewarding pursuit.

Following the ceremony, Jacob Palis (past president of the International Mathematical Union), Atiyah and Singer spoke at the Press Conference held at the Hotel Continental, each addressing the significance of the Abel Prize and the Abel Board's programs aimed at young people. That evening the laureates and their proud families were feted at a grand Banquet in the Akershus Castle overlooking Oslo's bustling waterfront and fjord. Mathematicians who had gathered from many countries to attend the award ceremony and honor the prizewinners also attended the banquet and went to the Abel Lectures and celebratory Reception at the Norwegian Academy the following day.