The Representations of Integers by Quadratic Forms:
An MAA Invited Address by Manjul Bhargava 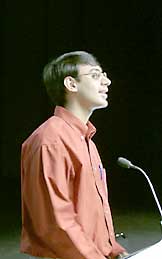 When does a quadratic form represent all (positive) integers? This was the question explored in an elegant and accessible lecture by Manjul Bhargava of Princeton University.

A quadratic form is a polynomial expression, like a2 + b2 + c2 + d2, in which every term has degrees two. Which such expressions take on all values of the integers? One example is provided by the "Four Squares Theorem" of Lagrange, from 1770: any (positive) integer can be expressed as the sum of four squares, as in the quadratic form given above. Are there other such quadratic forms that represent all integers?

Bhargava noted that there was very little progress on this question until 1910, when Ramanujan provided 54 examples of such quadratic forms. As with many of his brilliant feats, Ramanujan did not provide a proof in the traditional sense, but simply knew that these particular quadratic forms worked. Bhargava became interested in the question when he learned that in 1993 John H. Conway and William Schneeberger had found a very nice result: In order to check whether a given quadratic form represents all the integers, one need only check the integers up to 15. But the proof of this so-called "Fifteen Theorem" was rather intricate, and as a result it was never written up or published. When he heard about this remarkable state of affairs, Bhargava said, he dropped everything he was doing to see if he could come up with a simple proof. By translating the question into a geometric context, he was able to find a significantly simpler proof. These same ideas lead him to some stronger versions of the Fifteen Theorem. He even showed that, given any subset of integers--say, the primes--there is such a finite test to check whether a quadratic form represents that subset. Bhargava noted that, to check whether a quadratic form represents all primes, one need only check the primes up to 73.