The Society for Industrial and Applied Mathematics (SIAM) held its annual meeting in Portland, Oregon from July 12th through the 16th. Over 800 people attended the annual meeting, which overlapped with a SIAM Conference on the Life Sciences. All lectures, sessions, and exhibits were in the Oregon Convention Center in Portland. 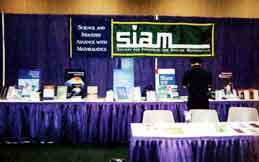 Some of the events at the annual meeting are listed below.

Oster's joint plenary presentation was the first talk at the meeting. Myxobacteria are slow-moving, cigar-shaped bacteria which move back and forth individually, but generate ripples as a group. Their circuitry and motors are like those in some of our cells, so studying myxobacteria lends insight into human biology. Oster showed clips of myxobacteria in motion and described some of the partial differential equations and statistics used to model their movements. He also described how myxobacteria "hunt in packs," and how, when food supplies become scarce, the bacteria aggregate and form spores until there is enough food. (Images courtesy of George Oster and Kaiser Lab.)

Treatment Planning for Radiofrequency Ablation of Liver Tumors and Optimization of Biopsy Protocols for Detection of Prostate Cancer, Ariela Sofer, George Mason University; part of the minisymposium: Optimization in the Life Sciences

Most patients with liver cancer are poor candidates for surgery. In her first talk, Sofer showed how a non-invasive technique, radiofrequency ablation, could be used to help those patients. The technique uses heat either to kill liver tumors or improve a patient's chance for surgery. Deciding exactly how to conduct the treatment is an optimization problem in that damage to any critical regions near the tumor is prohibited, and damage to normal tissue is to be minimized, while still maximizing damage to the tumor. In her second talk, Sofer discussed a method to improve the success rate of prostate cancer biopsies. Imaging can't differentiate between cancerous cells and healthy ones in the prostate, so biopsies are necessary to detect cancer. Surgeons use needles to sample locations in hopes of detecting cancerous cells. Yet the surgeon often can't tell exactly where the needle is during a biopsy and many cancers are missed. It is not practical to increase the number of samples taken, but better sampling could improve the detection rate. Sofer presented a needle placement method designed to optimize the probability of detecting prostate cancer, which did improve cancer detection rates in experiments.

Implicit Structure and the Dynamics of Blogspace, Eytan Adar, Hewlett-Packard Laboratories, part of the minisymposium: Dynamics in Social Networks

At this talk, Adar introduced the audience to the use and structure of blogspace (the space of web logs). He is interested in how information, either in general, such as from a source like CNN, or a specific story, spreads through blogs. Tracking how information travels through blogspace is hard because people often don't cite where they obtained their information, so connections between blogs often have to be inferred. Adar used these inferred connections to rank pages using an algorithm called iRank, and then compared these rankings to those from Google's PageRank algorithm. The rankings were quite different and Adar's claim is that iRank incorporates more relevant information than PageRank does. An interesting comparison was made between information spread and the spread of disease; the problems being almost opposite in that in the former case one wantsinformation to spread through a population.

Upstream refers to the exploration, production, and development of oil fields. Ray mentioned the successful applications of mathematical modeling in this part of the energy business to the following areas:

One of the themes from the lecture was summed up nicely by SIAM President Mac Hyman: Gas and oil are still "cheap" because of more efficient drilling, which is due to better simulations because of better mathematics. Indeed, Ray stated that we would not have the oil reserves that we do without mathematics. He also said that all the easy oil has already been found and that because of the cost of wells, drillers must find oil when they first drill. Unfortunately, wells never match the geologic models so improving our understanding of uncertainty would have a more significant impact than improving models would. Ray showed an animation of sound waves (used to map the subsurface in hopes of finding oil deposits) hitting and reflecting off the ocean floor which resulted in an image that looked like almost total noise. Data mining is necessary to get information from all the static. He estimated that they solve approximately 250,000 sparse matrices a day at ExxonMobil. Ray concluded that in his industry

In this invited topical presentation, Almgren first explained connections between mathematics and finance, and then gave details about a method he and Neil Chriss have devised to create investment portfolios. The goal of portfolio optimization is to maximize return growth while minimizing risk. Almgren discussed two weaknesses in the traditional mean-variance investment plan: its sensitivity to changes in the return vector, and the lack of quantified values for risk. The investment strategy Almgren presented is based on ordering assets and determining strategy based on that ordering. Almgren said that the advantage of this strategy is that ranking assets or groups of assets can be more reliable than generating expected returns for assets. He showed results of an experiment based on data from 100 stocks over a three-year period in which the ordering method outperformed all traditional methods.

Visit the SIAM website for more information. The 2005 SIAM annual meeting is in New Orleans, Louisiana.

Also available on this site are highlights from the SIAM annual meetings in 2003 and 2002.

The photograph of Mount Hood was taken by Michael Boardman (Pacific University).