A New Kind of Science and the Future of Mathematics: An AMS-MAA Invited Address by Stephen Wolfram, Wolfram Research 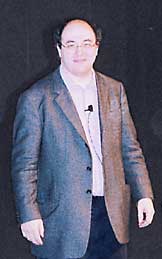 In his talk, Stephen Wolfram outlined the central themes presented in his book, A New Kind of Science, and discussed their ramifications for current mathematics and science in general. His main point is that if processes are computations involving discrete units of time and space, then cellular automata (CA) are the natural models to use for almost everything, including mathematics.

Wolfram's computer experiments and his classification of cellular automata led to his discovery of "Rule 30"--a simple rule resulting in very complex behavior--which he illustrated with examples from biology and physics. Wolfram pointed out that there are essentially three kinds of randomness: from an outside source, from initial conditions, and as the result of the internal complexity of the system. Rule 30 is an example of the third type.

Wolfram also discussed his "Principle of Computational Equivalence," which uses the fact that even CA's with simple rules can be universal. After reviewing his "Principle of Computational Irreducibility," he concluded that mathematics has managed to be successful by sticking to fairly simple problems. He then gave an example of a more experimental approach to mathematics: starting with a list of standard results and some pseudo-randomly chosen axiom systems, he used a computer to determine which results were provable within each system. This more experimental approach can lead to new discoveries, and may encourage more people, as Wolfram did, to get involved in this "new kind of science."