The AMS at 6ECM

The Sixth European Congress of Mathematics (6ECM) was held July 2-7, 2012, in Kraków, Poland. The Congress included plenary lectures, prize presentations, invited and prize winner lectures, poster presentations, mini-symposia, panel discussions, social events, satellite meetings, and the exhibition by publishers, vendors and mathematical societies. The American Mathematical Society was pleased to participate in 6ECM as one of the 20 publishers and organizations represented in the exhibition, and to sponsor two Poster Session prize winners: Diana Knipl ("Modelling the spread of influenza on long distance travel networks with real air traffic") and Ana Nistor ("Constant angle surfaces in 3-manifolds"). 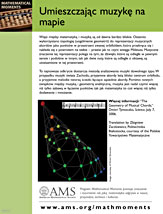 The American Mathematical Society hosted an exhibit, staffed by a representative from the AMS Publications Division, and another from Eurospan, the company that sells AMS books in Europe. In addition to displaying AMS books, the Society demonstrated features of MathSciNet and gave away posters and Mathematical Moments (including some that are translated into Polish and other languages).