The International Congress of Mathematicians (ICM) was held in Beijing, China, August 20-28. The AMS posted the announcement about Fields Medalists Laurent Lafforgue (Institut des Hautes Études Scientifiques, Bures-sur-Yvette, France) and Vladimir Voevodsky (Institute for Advanced Study, Princeton, NJ), and Nevanlinna prizewinner Madhu Sudan (Massachusetts Institute of Technology, Cambridge, MA), as well as information about the awardees and background on their work on the AMS website as soon as the awards were given at the Opening Ceremony. Following the announcement, articles about the Fields Medalists appeared in newspapers and journals worldwide.

The ICM website has posted highlights of the meeting, including the Opening Ceremony at the Great Hall of the People, the Fields Medals and Nevanlinna Prizes, and links to the complete scientific program. China President Jiang Zemin attended the Opening Ceremony and expressed the country?s support of the Congress and mathematics. The ICM website also provides video clips of the meeting. 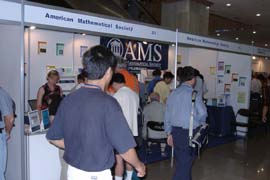 For seven days during the Congress the AMS hosted an exhibit of its recent book publications (including the World Directory of Mathematicians that the AMS distributes for the IMU) and provided access to MathSciNet. Many mathematicians visited the exhibit, and many of those who have written reviews for Mathematical Reviews® took this opportunity to use their "reviewer points" towards the purchase of books. At the end of the Congress the AMS donated its books on display to the Chinese Mathematical Society.

Ma Zhi-Ming, the ICM?s local organizing committee chair, reported that there were 4,260 registered participants from 101 countries and regions?1% from Australia; 3% from Africa; 56% from Asia; 16% from America; and 24% from Europe. Over half of the participants were from developing countries?that included about 1,700 Chinese mathematicians.

Over the past four years the AMS collected over US$126,000 from AMS members who made contributions to the IMU?s Special Development Fund. The fund awarded travel grants to 79 young mathematicians in developing countries to participate in this ICM.

The January 2003 issue of The Notices of the AMS includes an article "ICM 2002 in Beijing", by Deputy editor Allyn Jackson. The article includes highlights of the meeting, the welcoming speech by Shing Shen Chern, a summary of the extensive publicity about ICM, a note about human rights issues, the text of Edward Witten's closing remarks, and recognition of the many helpful students who volunteered throughout the congress.