A record number of attendees, over 5,500, came to the 2008 Joint Mathematics Meetings of the American Mathematical Society (AMS) and Mathematical Association of America (MAA) in San Diego, CA, January 6-9. Researchers presented over 1,900 papers from all specialties of mathematics, and mathematicians of all ages presented work, met colleagues, mentors and new friends, attended the annual Prize Ceremony, and saw a wide range of exhibitors. A Graduate School Fair was offered for the first time.

The Association for Symbolic Logic, Association for Women in Mathematics, National Association of Mathematics, National Science Foundation, Pi Mu Epsilon, Rocky Mountain Mathematics Consortium, Society for Industrial and Applied Mathematics, the Young Mathematicians Network and others hosted receptions and social events. A record number of students attended, and fourteen families used the Childcare Service. The AMS Who Wants to Be a Mathematician game for local high school students was covered by the local Fox News television station. The AMS Public Awareness Office issued a Joint Mathematics Meetings news release prior to the meetings and managed a Press Room staffed by the AMS and MAA, and hosted the JMM Blog, written by AMS-AAAS Media Fellow Adriana Salerno.

Coverage of the San Diego Joint Mathematics Meetings has appeared in the February 15 issue of Science ("Meeting Briefs: Joint Mathematics Meeting," by Barry Cipra), Nature News ("Mathematician proposes another way of divvying up the US house," by Eric Hand, about Paul H. Edelman's invited address, "Mathematics and the law: The apportionment of the House of Representatives"), Fox 6 XETV-San Diego and KBNT-TV San Diego (both about the Who Wants to Be a Mathematician game), and The Wall Street Journal ("Can Number Crunchers Go Mainstream?", a blog by JPBM Communications Award winner Carl Bialik about the Mathematics and Hollywood session). 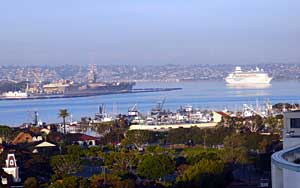 Most of the photographs on these pages were taken by Tony Badeaux of Convention Photo by Joe Orlando, Inc., others are by Diane Boumenot (AMS), Mike Breen (AMS), Bill Butterworth (DePaul University), and Annette Emerson (AMS).