A record number of attendees, nearly 6,000, came to the 2009 Joint Mathematics Meetings of the American Mathematical Society (AMS) and Mathematical Association of America (MAA) in Washington DC, January 5-8. Researchers presented approximately 2,000 papers from all specialties of mathematics, and mathematicians of all ages presented work, met colleagues, mentors and new friends, attended the annual Prize Ceremony, and saw a wide range of exhibitors.

The Association for Symbolic Logic, Association for Women in Mathematics, National Association of Mathematics, National Science Foundation, Pi Mu Epsilon, Rocky Mountain Mathematics Consortium, Society for Industrial and Applied Mathematics, the Young Mathematicians Network and others hosted receptions and social events. Mathematical Art Exhibition Prizes were awarded for the first time. Undergraduate students attended the Graduate School Fair, where representatives from 43 schools were available to present and discuss their graduate programs in the mathematical sciences. For the fifth year childcare services were available for families of registered JMM participants.

The AMS Public Awareness Office issued a Joint Mathematics Meetings news release prior to the meetings and managed a Press Room staffed by the AMS and MAA, and hosted the JMM Blog, written by AMS-AAAS Media Fellow Adriana Salerno. Press--writers for Nature, Science News, Science, American Scientist, and Slate--registered at this year's meeting. Media coverage to date includes: "Meetings Briefs: Joint Mathematics Meetings," by Barry Cipra, Science, "Of the Algorithms, by the Algorithms, for the Algorithms," by Chris Wilson, Slate, (on the redistricting problem); "When math and art collide," "The Four Color Problem Gets a Sharp New Hue," and "Mathematician answers Supreme Court plea," by Julie Rehmeyer, and "Mathematicians show how beetles can share a niche" and "Finding where criminals live by the numbers," by Patrick Barry in Science News; and "Fighting cholera by the numbers," by Roberta Kwok in Nature News. 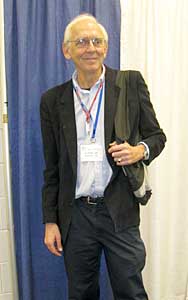 Most of the photographs on these pages were taken by David Luria, Diane Boumenot (AMS) and Claudia Clark (writer and editor).