On Saturday night, the annual AMS Banquet was held in the Phoenix Ballroom at the Phoenix Hyatt Hotel. During dinner, over 200 attendees enjoyed a "name that mathematician" presentation by AMS Executive Director John Ewing, featuring quotations about well-known mathematical scientists. The audience proved to be quite adept at recognizing the quirks and traits of their fellow mathematicians. Door prizes consisting of donated mathematical software were won by three attendees. The prize for the longest-term AMS member in attendance was won by Roy Dubisch, Professor Emeritus of the University of Washington. 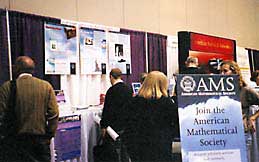 The AMS Membership Booth offered a wide range of free materials which those attending the meeting picked up to bring back to their schools or offices. Of course, the free coffee also attracted a lot of attention.