The 2010 annual meeting of the Society for Industrial and Applied Mathematics (SIAM) was held in conjunction with the 2010 SIAM Conference on the Life Sciences July 12-16 in Pittsburgh, PA. The meetings were held at the David L. Lawrence Convention Center and drew a record number of people, approximately 1200.

Below are links to summaries of some of the events that took place at the meetings.

Tymoczko (pictured above, left) gave a very entertaining public lecture about some mathematical properties of music, while pointing out that mathematics could not explain everything about music. He began by listing five properties that make music sound good, which are related to distance:

He then took a series of randomly generated notes and applied these principles (e.g. making adjacent notes closer) to create a better-sounding composition, even though no one would mistake it for a work of Mozart. Tymoczko also showed how symmetries, such as permutations, are used in music and illustrated these symmetries with some nice graphics of chords. Mapping n-note chords in n dimensions and identifying equivalent chords creates a quotient of n-space, which is an orbifold. He showed how an 1828 piece by Chopin, whose structure baffled people, could be explained using a quotient of 4-space. Yet in 1828 no one knew anything about orbifolds, so in this case the music could be used to understand geometry. Hear Tymoczko talk about math and music in the Mathematical Moment "Putting Music on the Map." See Powerpoint slides from the lecture. 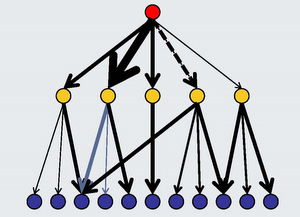 Pictured above are many of the prize and award winners. SIAM President Doug Arnold hosted the ceremony and handed out the prizes and awards listed below. In addition, the 2010 class of SIAM Fellows was recognized. 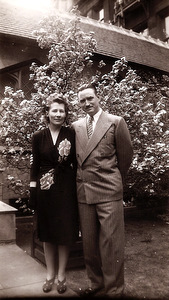 Burns, a former student of Reid's, gave the audience a look into the lives of William T. Reid, his wife, Idalia, and their mathematical family. Three of the anecdotes that Burns related follow.
*On their first date, while at the University of Texas, William and Idalia met for ice cream. After the date, Idalia tried to find out more about him (before Google) and found that there were two students named William Reid: One was a mathematical genius and one was a dunce. She said that even after the date she wasn't sure which one she'd met.
*When they married, on July 8, 1929, William agreed that he would buy only one math book a month. Burns showed the scan of the inside cover of Reid's first math book purchase, where he recorded the date of purchase--August 7, 1929.
*One of the many mathematicians in their lives was Ernst Hellinger. In the 1930s, he was sent to Dachau but was released as long as he agreed to leave Nazi Germany. Years later an author's copy (similar to a galley proof) of a work by Hellinger and Toeplitz, presumed lost when the Nazis burned Hellinger's house, was found in a Frankfurt book store. It was sent to Hellinger's sister who then sent it to Reid. Inside the book he found a four-leaf clover that Hellinger had placed there when he was proofing his copy. Reid left Hellinger's book to Burns who still has the book. The four-leaf clover is still inside. (Image courtesy of Dr. John Narciso.) 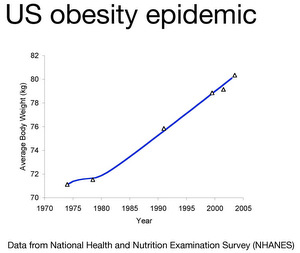 Chow addressed the obesity epidemic in the U.S. (graph at left) and its causes. He explained a model for weight gain/loss, based on imagining the body as a fuel tank with energy coming in (in the form of food) and energy going out. The equations in the model are differential equations, but because neither the body nor food is homogeneous, a system of equations results. Estimating the parameters in the system of equations is easier because of Forbes Law which relates the change in lean body mass with respect to fat body mass to the amount of fat. Because there is a huge time delay (about a year) before a person reaches steady state, it is hard for dieters to get good feedback on their diets. At the end of his talk, Chow said that he thinks the reason for the increase in obesity since the 1970s is the increase in production and the merchandising of food consumption. Read Chow's summary on his blog: "Summary of SIAM talk," July 23, 2010. 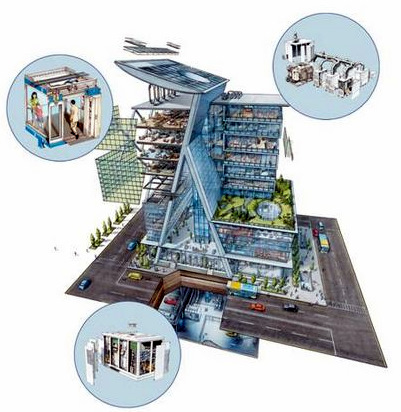 Buildings consume 39% of U.S. energy, 71% of its electricity and produce 48% of the country's carbon emissions. Improving the efficiency of buildings would lead to energy savings probably unattainable in cars and trucks: A 50% decrease in energy usage in buildings would be equivalent to taking every passenger vehicle and small truck off the road for a year. Jacobson said that it was possible to save 80% on energy usage in buildings with an investment that would be recoverable in 5-10 years. He called for a systems integrative approach, as is used in cars, with continuous computer monitoring of heating and cooling sytems. Retrofitting buildings using techniques like replacing light bulbs, can save 10-30% of energy usage, but he showed an example of a one million square foot building in Germany that has reduced energy consumption by more than 50% by, for example, not using fans or ducts but instead using night cooling and sophisticated louvers to move air. One current impediment to improved efficiency is that after careful planning often during construction someone will replace a part without knowing its importance to the design. Among the areas of mathematics relevant to improving energy efficiency in buildings are dynamical systems, graph theory, linear algebra, and the ability to assess risk and uncertainty. (Image from http://www.engineering.ucsb.edu/~mgroup/wiki/index.php/Main_Page.)

Linear algebra is a beautiful and very useful area of mathematics. In this lecture, Sturmfels described methods from abstract algebra that are used to model non-linear problems. Three applications that he talked about were 1. chemical reaction networks, which are important in systems biology, 2. convex algebraic geometry (images of spectahedra above, courtesy of Bernd Sturmfels, click for slightly larger versions), which Sturmfels called a marriage of real algebraic geometry and optimization theory (specifically semi-definite programming), and 3. tropical mathematics, in which the maximum or minimum operation is used with addition. Near the end of this lecture, Sturmfels said that "linear algebra has been fantastically useful; non-linear algebra is the natural next step."

In this invited address, Kolda talked about tensor analogs of the singular value decomposition for matrices. She discussed algorithms which could eventually reconstruct the original data even when more than half of the data were missing. As an example, she showed an experiment with people who have epilepsy. Often electrodes will slip off, especially during seizures, so that the data is incomplete, but researchers don't want to throw out all the data from that person just because of the unattached electrodes. Kolda's method recaptured the missing data in this case and in an example from chemometrics, in which concentrations of amino acids are determined. See the paper Scalable Tensor Factorizations from Incomplete Data.

Bangs illustrated what his company does to create computer-based models of human response to a drug or to therapy, in hopes of saving pharmaceutical companies money in research and development. Entelos focuses on the transition from animal tests to human trials. A particular example Bangs talked about involved a drug that worked well in rodents. Entelos' virtual tests showed that the drug would not work in humans, so the company that commissioned the work stopped development. Other drug companies later went ahead with development, at great cost, and discovered during the human trial process that the drug did not work.

Several exhibitors were present at the meeting, including the AMS, and got the most traffic during breaks between sessions when free coffee and tea were available. Due to the continually looping tourism video nearby, staffers became instant experts on Pittsburgh and its waterways.