The American Mathematical Society was a Palladium Sponsor and Exhibitor at the second USA Science & Engineering Festival (USASEF), the nation's largest celebration of science and engineering, held April 28-29, 2012 in Washington, D.C.

Mathematical Research... it's KNOT what you think

The knot-making activities drew nearly 2,000 visitors of all ages. They created their own mini-version of a mathematical stick knot using small wooden dowels and plastic tubing, and over 750 young people attached their constructed knot to a lanyard to wear at the festival and take home. Others experimented with different lengths of plastic pipes and 90-degree elbows to create a particular knot with as few sticks as possible.

As Ludwig notes, "One of the great things about studying knot theory is that it is very hands-on. Take a piece of string, tie a knot into it and glue the ends together into a closed loop, and you have a mathematical knot. Knot theory is a relatively new branch of mathematics; it is roughly one hundred years old. Interestingly, a good deal of the work done in the last twenty years has included undergraduate students. Knot theory is one of the few branches of mathematics accessible to a wide audience." Read about the Unknot Conference 2012.

See more about knots and how knot research is applied in biology, medicine and chemistry:
* Illustrated knot signs for more information
* AMS books on knots: The Shoelace Book: A Mathematical Guide to the Best (and Worst) Ways to Lace Your Shoes, by Burkard Polster; The Knot Book: An Elementary Introduction to the Mathematical Theory of Knots, by Colin C. Adams; and Knots and Links, by Dale Rolfsen

The USASEF is a grassroots collaboration of over 500 of the U.S. leading science and engineering organizations to increase public awareness of the importance of science and to encourage youth to pursue careers in science and engineering by celebrating science in much the same way as we celebrate Hollywood celebrities, professional athletes and pop stars. The free, family-friendly event drew over 150,000 kids and adults to participate in over 2,000 hands-on activities and see more than 200 live performances by science celebrities, explorers, best-selling authors, entrepreneurs and world-renowned experts. Below is a slideshow of just some of the many activities. 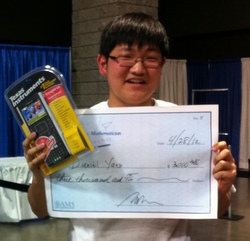 The AMS also hosted Who Wants to Be a Mathematician on Saturday, April 28. The contestants were from high schools in DC, VA, and MD. Daniel Yang, a junior at Urbana High School in Maryland, won US$3000!

See the AMS activity at the 2010 USASEF, a "barn raising" of the Gyrangle sculpture, built by festival attendees of all ages and led by George Hart.