The AMS at the 2016 USA Science and Engineering Festival 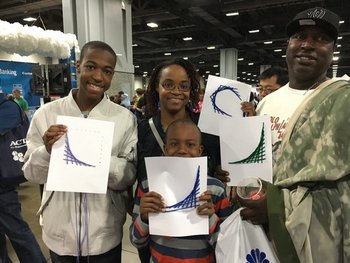 The AMS was a Palladium Sponsor and Exhibitor at the fourth USA Science and Engineering Festival (USASEF), the nation's largest celebration of science and engineering, held April 14-16 at the Walter E. Washington Convention Center in Washington, D.C. The Society hosted a booth at which attendees could stitch approximations to curves by creating envelopes of lines and held the game Who Wants to Be a Mathematician. Over 4,000 people came by the booth and participated in the activity.

The curve-stitching activity was a very popular activity and fun for families to do. Below are a video and slideshow of people doing the basic design, an approximation to a parabola, and the more complicated ones, which involved polygons. 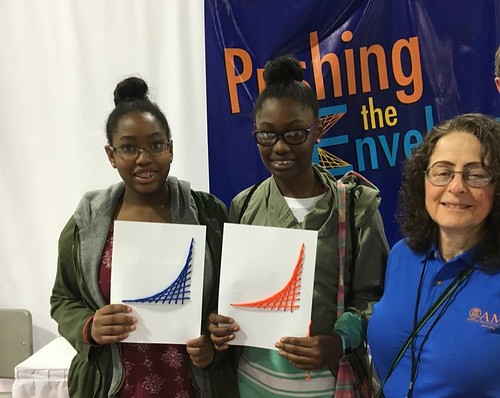 See more about curve-stitching and the designs used
.

Other Activities at the USA Science and Engineering Festival

The 2016 event drew over 365,000 young people and adults to participate in over 2,000 hands-on activities and see live performances by science celebrities and best-selling authors, including a live conversation with astronaut Jeff Williams, who was aboard the International Space Station. Below is a slideshow of pictures of activities at some of the booths. Science, math, and engineering organizations in the U.S. participate in USASEF in order to increase public awareness of the importance of those subjects and to encourage youth to pursue careers in science, math, and engineering. 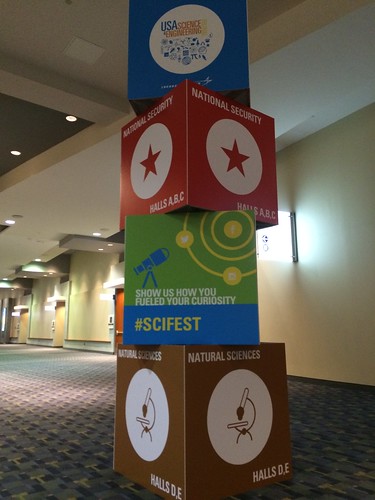