Home > The Profession > Career Information > What do mathematicians do? 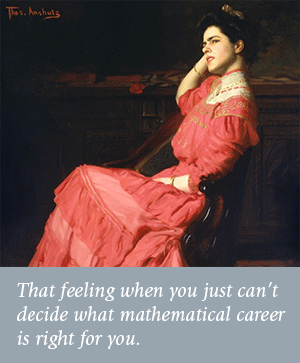 Mathematicians work in many fields outside of academia. 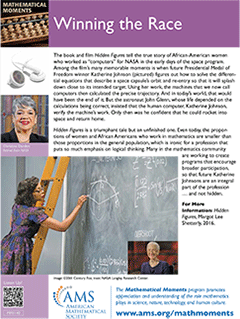 The diversity of fields that employ mathematicians is reflected in Mathematical Moments and Mathematics and Statistics Awareness Month themes.

Mathematicians make it possible to send secure emails and buy things online. Mathematicians are essential to analyze data and design accurate models in almost every field, from biology to finance. Mathematicians enabled researchers to complete the Human Genome Project quickly. And because of the prevalence of the computer at work and at play, mathematicians will continue to be an important part of everyone's life in modern society.

A recent CareerCast.com article, The Best Jobs of 2017, notes that in total, four of the top 10 best jobs of 2017 are built on math. Operations research analyst ranks No. 3 and mathematician ranks No. 7. The article goes on to state that as the world becomes more quantitative and data-focused, mathematics takes center stage.

How many mathematicians are there in the U.S.?

There are over 35,800 ***true, or from the old CML???***individual members of the four leading professional mathematical sciences societies in the U.S.—the American Mathematical Society, the Association for Women in Mathematics, the Mathematical Association of America, and the Society for Industrial and Applied Mathematics. ***I think I'd lose the rest of this paragraph, keep last half of last sentence?? "There are also ..."*** Most would call themselves mathematicians; many received their doctoral degrees outside the U.S. There are at least 10,000 more members of the societies who are graduate students or in other categories, and there are also mathematicians and companies who are not members of any of these societies.

Although they have advanced degrees in mathematics, many of those employed in academia might call themselves professors instead of mathematicians, and similarly, those in industry and government may not have "mathematician" in their job title. The job title doesn't tell the whole story, however: these people are doing mathematics and are indeed mathematicians. Furthermore, the number of mathematicians is increasing. The number of new PhDs in the mathematical sciences in the U.S. has gone up every year since 2002. 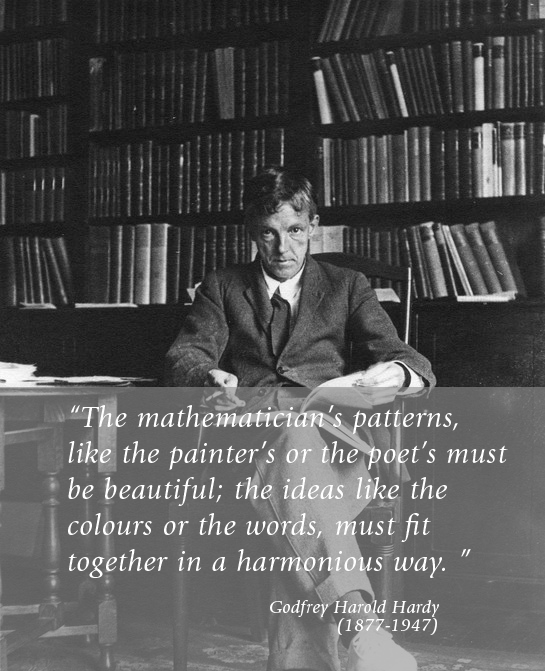 Mathematicians are people of all ages and from all over the world who enjoy the challenge of a problem, who see the beauty in a pattern, a shape, a proof, or a concept. Some of the best young mathematicians compete in their country's Math Olympiad, state and national science fairs, or the fun Who Wants to Be a Mathematician game. Some high school mathematicians go to summer math camps to learn more and work with teams on projects; undergraduates participate in Summer Research Experiences. Many carry on their research and teach at colleges and universities, while others apply their skills in all kinds of other professions.

There's probably a bit of the "mathematician" in all of us and we don't even realize it. Keith Devlin poses this idea in his book, The Math Instinct: Why You're a Mathematical Genius (along with Lobsters, Birds, Cats, and Dogs). In any case, those who are not "mathematicians" can appreciate the subject by reading about: mathematicians, breakthroughs in mathematics, and new applications in the AMS's online news magazine Math in the Media.

A growing push towards diversity . . .

Ruth Haas penned an interesting opinion piece in the Notices noting that as a profession, Yes, we marvel at the prodigies whose unwavering interest and aptitude in mathematics are evident from the start. But we must also open our minds to the vast numbers of students–women and minorities (and others from all walks of life)–who can be mathematicians but may not make that choice until late in their college careers or after.

Towards that end, the AMS is committed to fostering efforts to support the hiring, retention and promotion of women and underrepresented minorities at all levels of academia and in industry. Take a look at our efforts to increasing diversity in the profession.

Godfrey Harold "G.H." Hardy was a leading English pure mathematician whose work was mainly in analysis and number theory.

We can't use this image

Resources on the Mathematics Profession

The resources we've highlighted here are just the tip of the iceberg. Roam around the site, get familiar with what we have to offer, and ask us questions. We're always here to help!