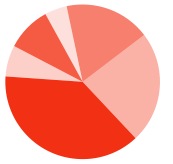 Prior to 2000, Annual Survey data was published twice a year in the Notices as the First and Second Reports. First Reports remain the same, while Second Reports contain all of the sections that are now divided between the Second and Third Reports.

Questions about surveys and data should be sent to ams-survey@ams.org.