"I was extremely moved by the level of enthusiasm and energy displayed by the participants at our workshop in General Relativity. I have never been, I believe, in my entire career, to a more exciting meeting from this point of view, one in which both the young people and not so young, like myself, were talking mathematics almost non-stop, from early on at breakfast until late at night in the hospitality suite. The format of the MRC conferences, which allows all participants to give their best, enabled this magic to take place. The choice of location, the beautiful Snowbird resort, also helped a great deal. Congratulations to AMS for this very unusual and successful initiative." --- Sergiu Klainerman (co-organizer, Mathematical Challenges of Relativity)

"It was inspiring to be involved with young mathematicians as they enthusiastically debated mathematical problems and solutions. I especially enjoyed discussing the math of the participants and working with and getting to know such intelligent and dedicated young mathematicians. I would recommend MRC conferences to everyone." --- Eric Todd Quinto (co-organizer, Inverse Problems)

"The scientific part of the program was fantastic and is already proving to be very helpful for my mathematical work."

"Our group at least, had a lot of flexibility in terms of breaking off into subgroups, etc. which was good."

"I had a great time and I hope the MRC program continues. I found all the participants so smart and interesting and fun. I left the conference with a whole new group of colleagues and even if we never collaborate I know that we will cross paths many times."

"For me it was one of the most rewarding experiences I have had in my mathematical career. The vitality, enthusiasm, interest and hard work of the participants were invigorating. I am going to try to be involved in more meetings using the MRC setup; workshops intended for and run by the young people in the field." --- Gunther Uhlmann (co-organizer, Inverse Problems)

"The summer school in Snowbird offered a unique opportunity for interactions at multiple levels. The talks were great, the food delicious, and the mountains quite spectacular. I was very pleased to meet and interact with so many bright young researchers at one time!" --- Ciprian Demeter (co-organizer, Harmonic Analysis)

"These young researchers were thrilled to be in a setting dominated by their interests, enthusiasm and energy. And it was a challenge to keep up with them." --- Michael Lacey (co-organizer, Harmonic Analysis)

"Meeting so many colleagues in my field who are more or less at the same stage of their career [was an aspect of this conference that distinguished it from other conferences and workshops]. Sharing thoughts, experiences and feelings on the professional issues with peers was quite valuable."

"The best part was being able to interact and discuss research with my peers." 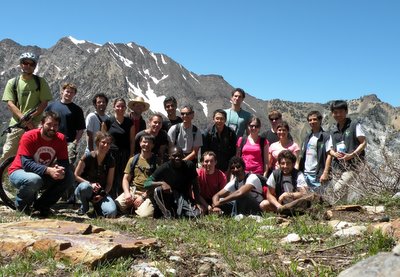 These next six photos were taken by MRC 2009 participant Yulia Hristova:

"I was amazed and heartened by the effort the participants put into their work (I received an email from one participant time-stamped 2:00am). Their active participation resulted in a stimulating and encouraging experience for everyone. It was a pleasure for me to be involved and I expect this model will be used as a way to run future workshops." --- Stephen McDowall (co-organizer, Inverse Problems)

"These young researchers were thrilled to be in a setting dominated by their interests, enthusiasm and energy. And it was a challenge to keep up with them." --- Michael Lacey (co-organizer, Harmonic Analysis)

"This year's MRC workshops were again quite exciting," says David Eisenbud, chair of the Advisory Board of the MRC Program. "I heard second-hand about the good times (and hard work) of the first two, and actually participated myself in one of the two workshops in the third week, which was on the theory of Markov chains: we participants divided into three groups, and each group worked on a genuine research problem. The regular participants--and I too!--were highly energized to tackle these problems with such expert guidance and advice, from three of the famous masters of the field, Persi Diaconis, Jim Hobert, and Susan Holmes. Though none of us was sure of it in advance, and the problems initially seemed almost out of reach, each of the three groups had the excitement of making some progress on their problem.

"It was just what I'd hoped an MRC workshop would be: great fellowship and cooperation among the participants, and intense contact and work with the great experts who led the workshop." Eisenbud took these photos in the area around Snowbird.