"The collaborating aspect made all the difference. As a collective we were able to learn from each other and discuss open problems and make some advancement." 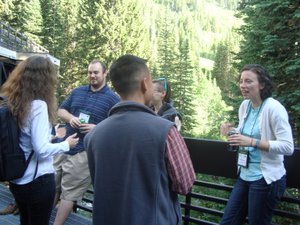 The 2015 Mathematics Research Communities (MRC) summer conferences were held in June at the Snowbird Resort in Utah. The three week-long conferences drew 119 early-career mathematicians. These conferences, funded by the National Science Foundation, are part of the AMS program that will include special sessions at the Joint Mathematics Meetings, a longitudinal study, and a continuation of the connections and collaborations via an electronic network.

"The focus on networking is great, as is the fact that most attendees are at a similar career level. Since the other attendees are peers, it's easier to reach out and meet new people at MRC than at other conferences."

In the past few years there has been significant progress on many different fronts of commutative algebra. Many of these developments have been inspired by new ideas and techniques coming from algebraic geometry, representation theory, and algebraic topology. These have opened up exciting new avenues of research and also a potential for collaboration between them. The workshop focused on the following topics: Singularities in positive characteristic, Local cohomology and D-modules, Methods from homotopy theory, Castelnuovo-Mumford regularity, and Infinite free resolutions.

"The collaborating aspect made all the difference. As a collective we were able to learn from each other and discuss open problems and make some advancement."

Financial Mathematics is a branch of applied mathematics based on stochastic analysis and optimization that has gone through a period of extensive growth over the last years. Originally concentrated in portfolio management and derivatives pricing, the use of sophisticated mathematical methods has grown to a wide array of different applications in finance. The workshop focused on three topics of current interest in the area of financial mathematics: high frequency trading, optimal investment under transaction costs, and systemic risk.

"This is very timely topic that both researchers and industry practitioners have to take a look these interesting research areas that will affect trading strategies and the market as well."

One of the most critical scientific challenges of our time is to understand Earth’s climate and how it is changing. This MRC is intended to introduce early-stage mathematicians to research focused on a key indicator and driver of climate change--sea ice. Following a few introductory lectures on sea ice and the mathematics used to study it, teams were formed to begin tackling questions in current areas of mathematical sea ice and climate research: Sea ice and global climate models, Sea ice processes and the climate system, Linkage of scales-homogenization of effective properties, Bifurcations in low order nonlinear models of polar climate, and Polar ecosystems.

"As a pure mathematician, I enjoyed the introduction to the science of climate and sea ice, and the opportunity to work and network with researchers in the field."

"This was a novel conference and it was a success in my book. In fact, I wish there were more conferences following this format."

"The ability to pick a problem and work on it in groups separated this from other conferences for me. At most conferences I may come home with one idea or two, but with this style I came home with many. Also, my group has already started answering that problem. Having worked in a group has allowed me to make closer contacts than I would at a standard conference where I may only share a meal when meeting someone new."

Those accepted into this program receive support for the summer conference, and will be partially supported for their participation in the Joint Mathematics Meetings which follow in January. The summer conferences of the MRC are held in the breathtaking mountain setting of the Snowbird Resort, Utah, where participants can enjoy the natural beauty and a collegial atmosphere. This program is supported by a grant from the National Science Foundation.

"It truly was the best mathematical experience of my graduate career. I hope it will continue so that other young mathematicians can find a way to network and collaborate in meaningful research in their areas. I feel honored and I want to thank everyone involved in selecting me to take part in this experience."

"The staff made the application, arrival, and reimbursement processes very clear, both before the conference and during." 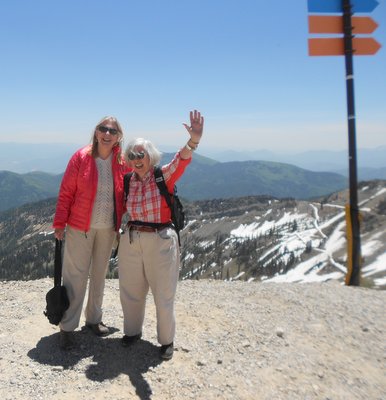 Ellen Maycock (left), who led the MRC program since its inception in 2008, retired from the AMS after attending this year's Week 2. Thanks to her for her commitment and all her work writing grants, finding organizers, working with AMS Meetings & Conferences on logistics, and caring so deeply about the work and lives of the many early-career mathematicians who have passed through and benefited from the MRC program. Under her leadership, the MRC program has served over 900 participants and has drawn on the expertise of more than 100 organizers. Chris Stevens (right) AMS Associate Executive Director, Meetings and Professional Services Division, will carry on the program and welcomes proposals from organizers and applications from early-career mathematicians for future MRCs.

See information on the 2016 MRC sessions and how to apply.

Read about the 2014 Mathematics Research Communities and the MRC program.