On May 7, 2002, Chairman Sherwood L. Boehlert, Ranking Member Ralph M. Hall, and members of the House Committee on Science, introduced legislation calling for a 15 percent increase in funding for the National Science Foundation for each of the next three fiscal years. This represents a significant increase for the agency that funds fundamental scientific research. AMS President Hyman Bass attended the announcement and commended Representatives Boehlert and Hall, and committee members, for their continued support of the NSF, saying that their efforts demonstrate their understanding that basic science and mathematics research is a necessary priority for our nation. 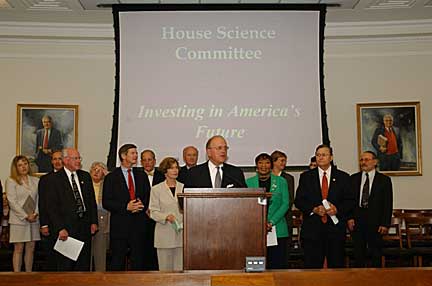 NSF is the primary source of federal support for non-medical basic research in colleges and universities. More than 95% of NSF funds go directly to researchers. Funding for the NSF has proved to be a good investment of federal dollars: NSF investment in mathematics research has contributed to many innovations, such as artificial heart valves, encryption algorithms, and image processing and reconstruction. Research is ongoing in bioinformatics, nanotechnology, modeling infectious diseases, and the fight against terrorism. NSF also plays a vital role in science and mathematics education, training the next generation of scientists, engineers and mathematicians, who will be critical to our nation's future well-being.

Thanks to Chairman Boehlert and his colleagues on the House Committee on Science, the ground has been laid to enable NSF to continue its mission successfully.