Feeling Your Way Around in High Dimensions

The simplest objects of interest in any dimension, which are also the basis for approximating arbitrary objects, are the convex polytopes. and in this column I'll explain how to begin to probe them...

Visualization of objects in dimensions greater than three is not possible, which means that it is very difficult to comprehend objects in those dimensions. You cannot see the whole thing all in one glance. All one can do is probe with mathematics to verify a limited number of selected properties, like the proverbial blind men dealing with the elephant. The simplest objects of interest in any dimension, which are also the basis for approximating arbitrary objects, are the convex polytopes and in this column I'll explain how to begin to probe them.

Convex polytopes occur in many applications of mathematics, particularly related to linear optimization problems in the domain of linear programming. There is a huge literature on this topic, but I shall be interested in something different, because even in theoretical mathematics interesting problems involving convex polytopes arise. The terminology traditionally used in linear programming originated in applications, perhaps with non-mathematicians in mind, and it diverges considerably from standard mathematical terminology. Instead, I shall use notation more conventionally used in geometry.

What is a convex polytope?

In any dimension $n$, a convex set is one with the property that the line segment between any two points in it is also in the set. For example, billiard balls and cubes are convex, but coffee cups and doughnuts are not. There is another way to characterize convex sets, at least if they are closed: A closed convex set is the intersection of all closed half planes containing it. 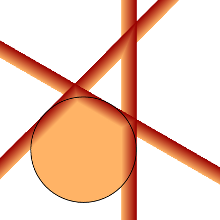 There is a third way to characterize closed convex sets. The convex hull of any subset $\Sigma$ of ${\Bbb R}^{n}$ is the set of all linear combinations $$ \sum_{i=1}^{m} c_{i} P_{i} $$ with each $P_{i}$ in $\Sigma$, each $c_{i} \ge 0$, and $\sum c_{i} = 1$. If the set has just two elements in it, this is the line segment between them, and if it has three this will be the triangle with these points as vertices. In general, each point of the convex hull of $\Sigma$ is a weighted average of points in $\Sigma$. A point of a set is extremal if it is not in the interior of a line segment between two points of the set. For example, the points on the unit sphere are the extremal points of the solid sphere, and the extremal points of a cube are its corners. Every closed convex set is the convex hull of its extremal points.

A closed convex set is called a polytope if it is the convex hull of a finite number of points and rays, like this: 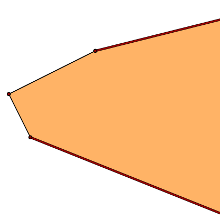 So there are two ways in which a polytope might be handed to you, so to speak. In the first, you are given a finite set of points and a finite set of rays, and the polytope is the convex hull of these. In the other, you are given a finite collection of affine functions $f_{i}(x)$, and the polytope is the intersection of the regions $f_{i}(x) \ge 0$. Each of these two ways of specifying a polytope is important in some circumstances, and one of the basic operations in working with convex polytopes is to transfer back and forth between one specification and the other.

There are other natural questions to ask, too. A face of a polytope is any one of the polytopes on its boundary. A facet is a proper face of maximal dimension. Here are some natural problems concerning a given convex polytope, which I suppose given as the intersection of half-planes:

But here I have space for exactly one of these questions and some related issues: How to find the dimension of a polytope specified by a set of inequalities? This is by no means a trivial matter. For example, the inequalities

define a triangle, whereas specifies just the origin, and

specifies an empty set. So the answer to the question does not depend on just the algebraic form of the inequalities.

I include also links to a collection of Python programs that illustrate what I say in a practical fashion.

The basic idea of of dealing with a convex polytope is to find one or more coordinate systems well adapted to it. I shall assume that the inequalities you are given to start with are all of the form $f(x) \ge 0$, where $f(x)$ is an affine function, one of the form $\Big(\sum_{i=1}^{n} c_{n}x_{n}\Big) + c_{n+1}$. This differs from a linear function by the presence of the constant. This assumption is easy enough to arrange by changing signs and shifting variables from one side of an equation to another.

This suggests that to understand any region $\Omega$ defined by inequalities $f_{i}(x) \ge 0$, we must find out all the vectors whose translations leave the functions $f_{i}(x)$ invariant. Once we know that, we shall reduce the complexity of our problem by looking at a slice through the region that is not invariant under any of these, and which does have vertices. We may as well take this to be $\Omega$ in subsequent probing.

We shall do this at the same time we carry out another simple but necessary task. The inequalities defining $\Omega$ have no particular relationship to whatever coordinate system we start with. We would like to find a coordinate system that is somehow adapted to it. A first step is to require:

I. The coordinates are among the affine functions specifying $\Omega$ to start with.

A second step is to require:

II. The origin of the coordinate system must be a vertex of $\Omega$.

The rows of the new matrix still represent the original affine functions, but in a different coordinate system. In this new coordinate system, a subset of the rows will hold a version of the identity matrix. In this example, it is a copy of $I_{2} = \left[\matrix { 1 & 0 \cr 0 & 1 \cr } \right ]$. The corresponding affine functions are a subset of the new coordinates. Ideally, we would get a copy of the full identity matrix $I_{3}$, but in this case the inequalities are in some sense degenerate, and this matches with the related facts (1) we get $I_{2}$ rather than $I_{3}$ and (2) the third column of the new matrix is all zeroes. Very generally, if we start with $m$ inequalities in $n$ dimensions, corresponding to an $m \times (n+1)$ matrix, we want to obtain another $m \times (n+1)$ matrix some of whose rows amount to some $I_{r}$, with $n-r$ vanishing columns. In this case, the inequalities will be invariant with respect to translations by a linear subspace of dimension $n-r$, and in order to go further we want to replace the original region by one in dimension $r$. We do this by simply eliminating those vanishing columns.

But we are in good shape to find a true vertex of the region.

The traditional simplex method starts with a linear function, say $\varphi$, and a vertex frame for the region $\Omega$. It then moves out from this to other vertex frames and other vertices either (a) to locate a vertex at which $\varphi$ takes a maximum value or (b) find that the region is in fact unbounded, and the function is not bounded on it.

We do not yet have a vertex frame for the region we are interested in. In fact that's what we want to find. But it turns out that from the region we are given and the frame we do have, satisying condition I, we can construct a new convex polytope together with a very particular linear function $\varphi$, with this marvelous property: first of all, we are given in the construction of the new region a vertex frame for it; second, finding a maximum value for $\varphi$ on this new polytope will tell us (a) whether or not the original region is empty and (b) if it is not empty exhibit a vertex frame for it.

So, suppose now that we have a coordinate system whose coordinates are among the affine functions we started with. We must apply a new coordinate transformation to wind up with a coordinate system in which, in addition, the origin satisfies the inequalities, or in other words is a vertex of the region concerned.

The point of this is that for this new problem the coordinate origin is a vertex and a coordinate system satisfying both conditions I and II. Given this, we can pursue traditional methods of linear programming, moving around from one vertex frame to another, to find a maximum value of the affine function $x_{n+1}$. This will have one of two possible outcomes. Either the maximum value remains at $0$, in which case the original domain is empty, or the maximum value is $1$, in which case we have a vertex of the original region, which is embedded into the hyperplane $x_{n+1} = 1$.

So far, we have two possible outcomes---either the region we are considering is empty, or we have located one of its vertices and a vertex frame at that vertex as well. In the first case, we have in effect learned that the region has dimension $-1$. How do we find the dimension in the second case?

To explain what happens next, I have to introduce a new notion, that of the tangent cone at a vertex. The figures below should suffice to explain this. On the left is a 2D region defined by inequalities that are indicated by lines. On the right is an illustration of one of the vertices, along with its tangent cone. 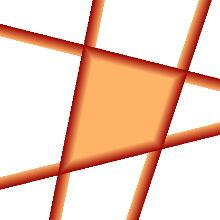 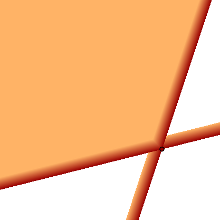 Finding dimension is a purely local affair, so we don't have to worry any more with other vertices---we can throw away all those functions which are not $0$ at the given vertex. The region defined by the inequalities is now the tangent cone at the vertex. Apply the simplex method to maximize the last coordinate variable. If it is $0$, that variable is a constant $0$ on the cone, and may be discarded. Then try again with the new last variable.

Otherwise, it will be infinite, and there is a real edge of the cone leading away from our vertex along which this variable increases. In this case, discard all the functions which depend on this variable, and with the ones remaining, set it equal to $0$. We are in effect looking at a degenerate cone containing this edge, and we may replace this degenerate cone by a slice transverse to the edge, which is also a cone. The dimension of the original region is one more than the dimension of this new cone, and it is easy to see that we have for this cone also a coordinate system satisfying I and II.

In effect, we are looking at a series of recursive steps in which dimensions decrease at each step. Sooner or later we arrive at a region of dimension $1$, which is straightforward.