It might be very surprising that some of the oldest remnants of Greek mathematics have been found on Elephantine Island, at the southern boundary of Egypt... 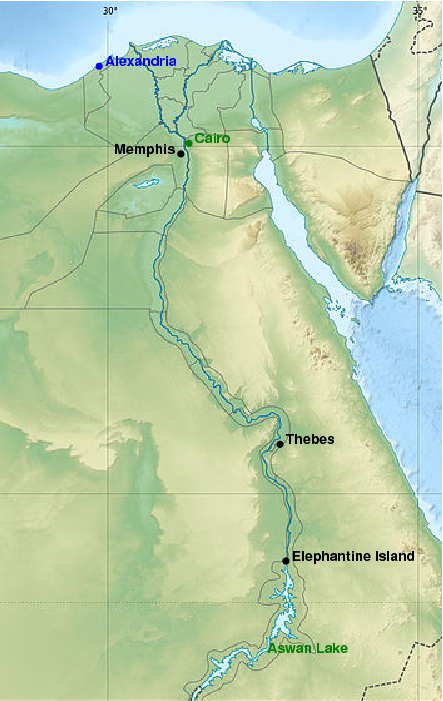 Derived from the Wikipedia map of Egypt By far the richest kingdom in the Hellenistic world was Egypt, governed by rulers descended from Alexander's general Ptolemy. The Greeks had a commercial presence in Egypt even before Alexander, at least since the 7th century BCE, but Alexander turned its economy outward to the Mediterranean world at large with the foundation of the city of Alexandria. It became almost immediately, and remained for a long time, the wealthiest city of the entire region.

Indeed, it was fabulously wealthy. It became a center of Greek culture, and among the most famous of its inhabitants were mathematicians. Although there is little solid evidence, tradition tells us that Euclid was brought from Athens to Alexandria, perhaps not too long after its foundation.

But after the conquest of Egypt by Alexander, Greeks moved into all of the country, effectively forming a ruling elite. They worked hard at establishing Greek culture wherever they moved, and in particular set up Greek schools for the children of the colonists. It might be nonetheless very surprising that some of the oldest remnants of Greek mathematics have been found on Elephantine Island, at the southern boundary of Egypt, where the Nile flowed through the First Cataract rendering continuous navigation beyond impossible.

Elephantine Island marks roughly the southern frontier of ancient Egypt. It is roughly 1,000 kilometers from the Mediterranean Sea to Elephantine, which marks also the southern extremity of the navigable Nile. It is in the middle of the river across from the more modern town of Aswan and just below what used to be the First Cataract and is now the site of the High Aswan Dam. It is today, even as it was in ancient times, a tourist destination. But in ancient times the major function of the site was as a military post, helping to regulate trade in goods (including, conjecturally, the ivory which some assert to have given the location its name) and migration of people along the river.

Elephantine is famous for many reasons. For one thing, it was the southern extremity of the geodesic arc by which Eratosthenes measured the Earth's circumference. (Alexandria, of course, was the northern one.) For another, the oldest dated Greek document was found there. This is a marriage document dated to about 310 BCE, and is to be found on a fragment of papyrus.

Memphis, Thebes, and Elephantine are ancient sites. Alexandria was founded by the Greeks in about 330 BCE. Cairo is relatively recent. The modern Aswan is the ancient Syene, an old settlement but not quite so old as Elephantine itself.

The mathematical items from Elephantine were found by a German archeological expedition in the early 20th century. They consist of six pottery sherds, known to the Greeks as ostraka (singular ostrakon). In contrast to papyrus, these were used generally for recording things of ephemeral value. They were made simply by breaking up pottery, and generally used for scrap work, whereas papyrus was used for recording things of more permanent value. A typical use of ostraka was as tax receipts. 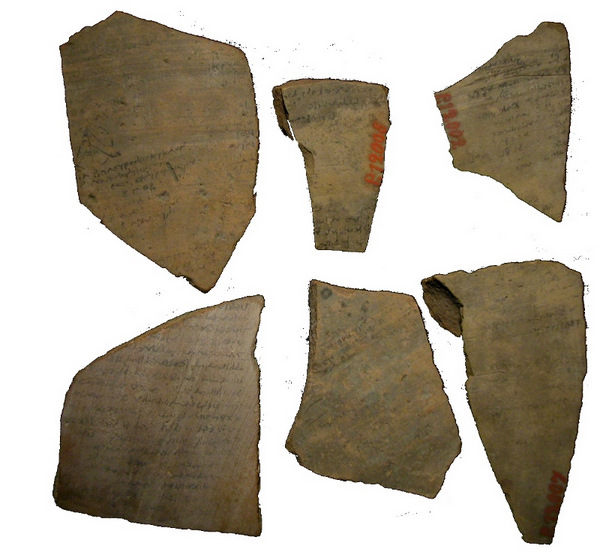 Here are closer looks at the six pieces. The writing on the ostraka is in carbon ink, and much of it has rubbed off. In addition, evidently, the pieces themselves are only fragments of larger pieces. I display the photographs taken in 2003 (with a digital camera) next to some older ones, when available, kindly sent to me by Fabian Reiter from the Berlin Museum. 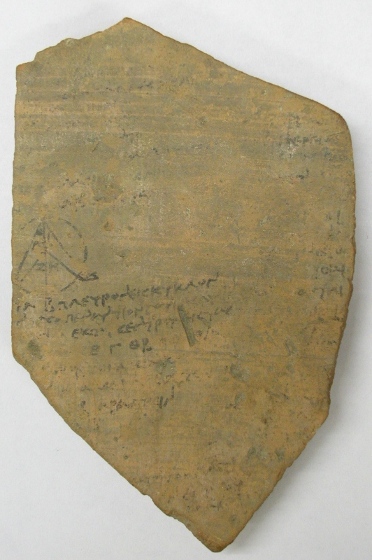 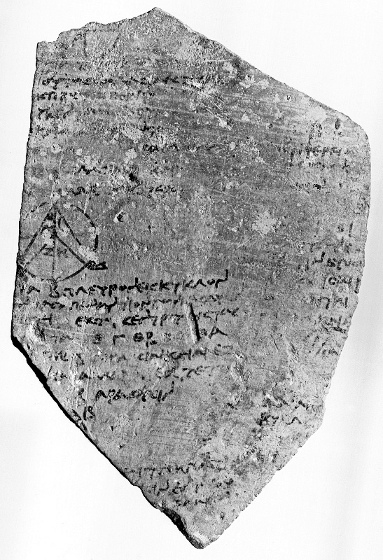 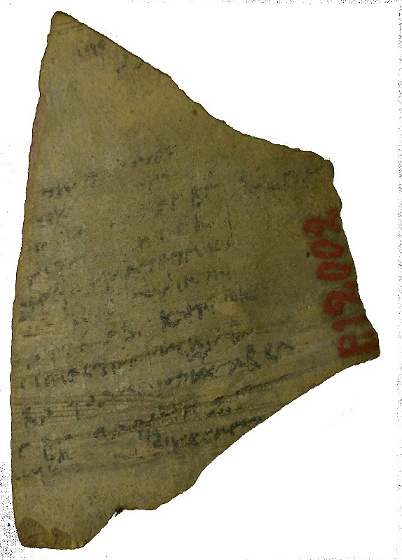 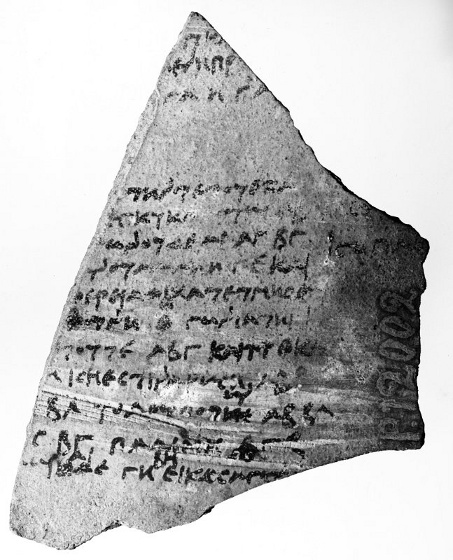 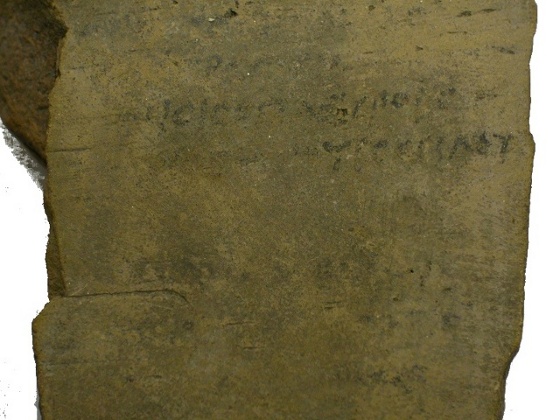 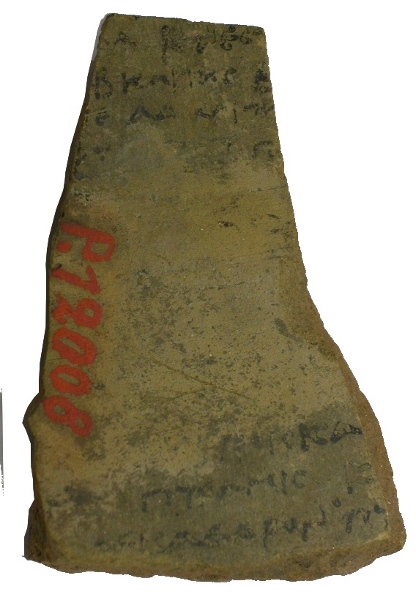 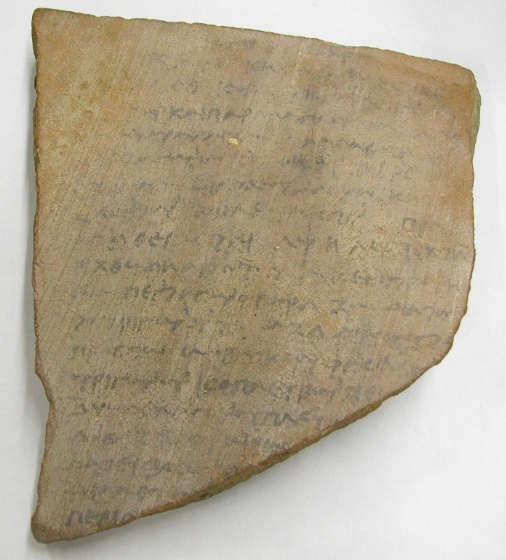 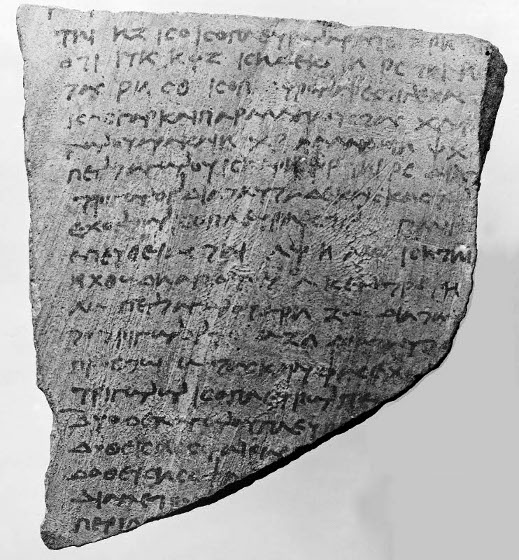 The ostraka were dug up in 1906-1908, by the expedition of Otto Rubensohn, but as with much of the material then found they were not reported on until much later, in 1972. In the published article (see below) the authors Mau and Müller remarked that the older photographs shown above had been made at the Fritz-Haber Institut in Dahlem, and later on they refer to quartz lamps and fluorescent lighting having been used. It would be good to be able to apply similar techniques to produce images in color, but no one I have consulted is quite sure how to do that.

Mau and Müller dated the ostraka to about 250 BCE, which would make them not much more recent than the dates attributed to the making of Euclid's Elements. But experts in an audience to whom these photographs were shown thought, on the basis of writing style, that a more reasonable date would be about 150 BCE. This still makes them perhaps the oldest mathematical documents we possess.

What is most surprising about the ostraka is that they seem to be a number of exercises concerned with the construction of the icosahedron, certainly one of the most sophisticated topics of ancient Greek mathematics. There are two extant sources of this material, Book XIII of Euclid's Elements and an essay by the later mathematician Hypsicles, which used to be bound with the Elements as Book XIV. But although there are evident links to these, there are also notable divergences in notation. This, considering with the incredible distance between Alexandria and Elephantine, provides tantalizing hints of the role of mathematics in Greek culture at large.

There is no direct reference to an icosahedron in the text of the ostraka, but circumstantial evidence is strong. 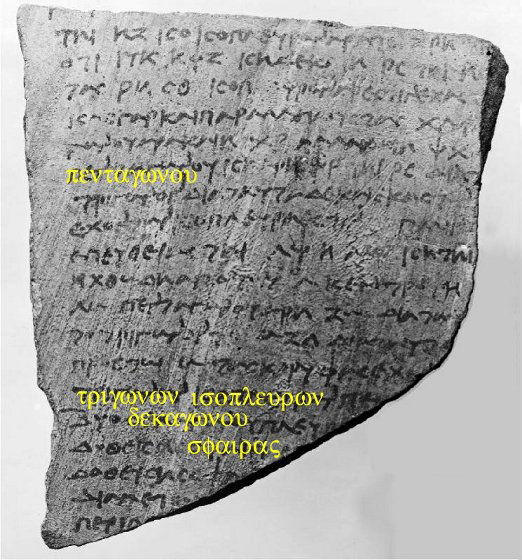 As Mau and Müller point out, the word σφαιρας on P12609 suggests that we are dealing here with something in 3D. The phrase τριγωνων πλευρον refers to equilateral triangles, and πενταγων rules out the tetrahedron or octahedron. Finally, the word δεκαγων occurs in the Elements only in two lemmas (IX and X) of Book XIII involved in proving Proposition XVI, which is the construction of the icosahedron. In fact, it does not seem to occur in any other connection in any extant Greek mathematical writings. I have said that this represents some of the most sophisticated mathematics in all of Greek mathematics, but I can add that lemma X is one of the most obscure in the Elements. Again we ask, how did it find its way to Elephantine? In what circumstances were the ostraka written? These are presumably just a few of an enormous number of questions one might ask about the role of geometry in the Greek culture of Ptolemaic Egypt. 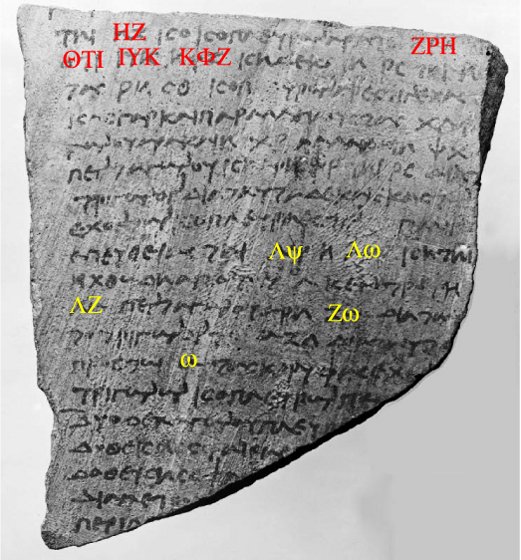 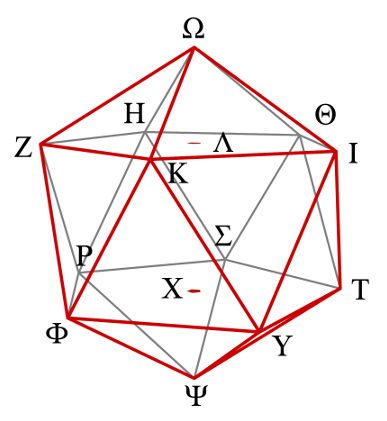 Consistent with this analyis is a reconstruction of the text carried out by Mau and Müller that is in fact an explicit construction - although with vertex labels apparently not used elsewhere. I annotate above some of these, as well as the diagram of Mau and Müller demonstrating the consistency of their reconstruction. 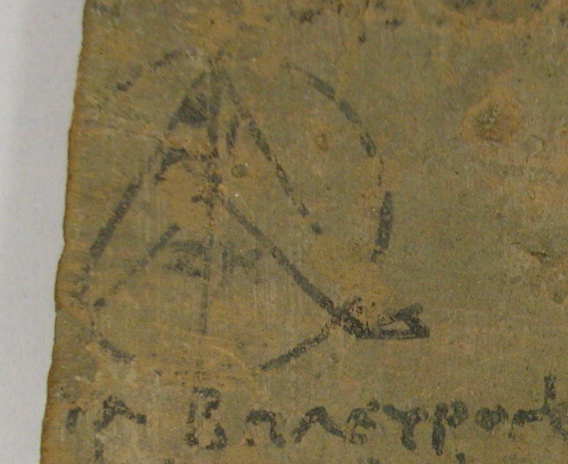 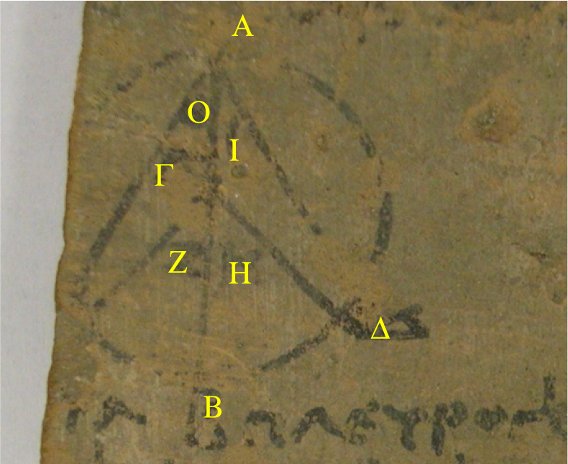 In addition to this, the diagram on one of the ostraka is closely related to extant diagrams proving Lemma X, as one can see from this image, taken from Book XIV of the D'Orville MS (dated 888 CE). 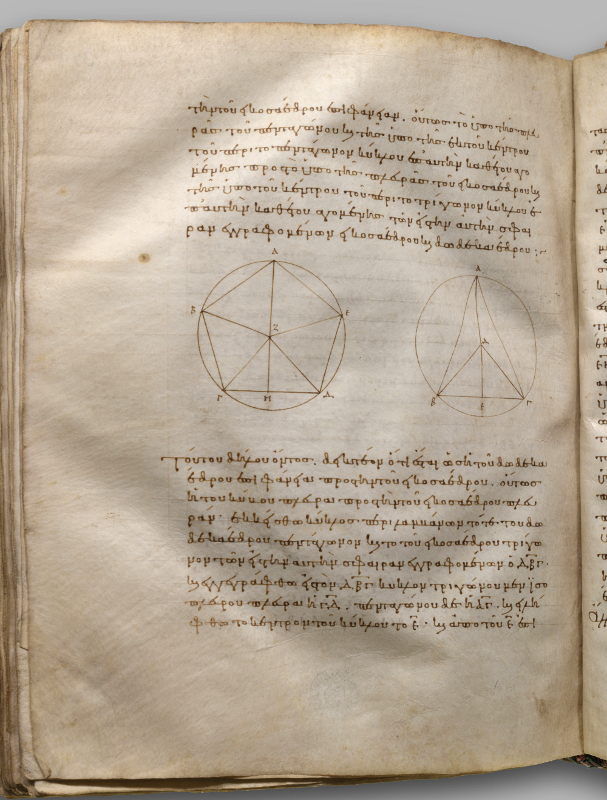 When I started writing this, I hoped to include an English translation of the Greek text on the ostraka as well as a mathematical discussion of Lemmas IX and X and Proposition XVI, but time ran out.

Euclid and the ostraka