It is in the very beginning of Apollonius' treatise the Conics that he deals with the question we are concerned with, and I'll try to explain, roughly, what he does. ...

The obvious answer is certainly correct. Nonetheless this is a subtle question. You say you see a circle when you are looking at a circle, but the reasons for this response are not straightforward. The data that lead to it are what your eyes perceive, no more and no less. But what your eyes perceive is entirely coded in images formed on your retina, and they are almost certainly not circles. Instead they are some kind of oval, and to say that a circle looks like an oval would in some sense be a more precise description of what is going on. Your interpretation of ovals as circles is based on the activity of your brain in interpreting the world around you - your 3D perception, which tells you that parts of the oval are further away than others; and your experience with seeing other circles in a wide range of situations.

In fact, the ovals are ellipses, except for some slight distortion caused by curvature in your retina, and this is an even more subtle fact. The reason it is subtle is that ellipses have a four-fold symmetry, whereas the only obvious symmetry in your perception of a circle is likely bilateral. Part of the circle is closer than other parts, and you might expect that part to bulge a bit, so the actual shape you perceive would look more like an egg than an ellipse. Famous and talented people have indeed asserted that this is the way things are.

As the figure above suggests, the image recorded on your retina is the intersection of (a) the cone whose base is the given circle and whose apex is the lens of your eye and (b) the (approximate) plane spanned by your retina. It is, to a very close approximation, a conic section. That such an intersection is an ellipse was known to the ancient Greeks, in some form from around 350 B. C. E. on. Euclid wrote a treatise on conic sections, but it is no longer extant. This is probably because Apollonius (c. 250 B.C.E.) wrote the authoritative manual on conic sections, one that was much more general, more complete, and probably more elegant than all previous efforts, causing them to disappear.

It is in the very beginning of Apollonius' treatise the Conics that he deals with the question we are concerned with, and in the rest of this note I'll try to explain, roughly, what he does. I'll get there slowly.

The equation of an ellipse

Apollonius' principal tool in analyzing conic sections is a kind of coordinate geometry, along with equations for the sections in terms of these coordinates.

The one for a circle is fundamental and simple. As the figure on the left shows, a triangle inscribed in a semicircle with a diameter as one side is right-angled. A simple argument about similar triangles then shows that $$y^{2} = x(d-x) $$ with $x$, $y$, $d$ indicated in the right-hand figure. 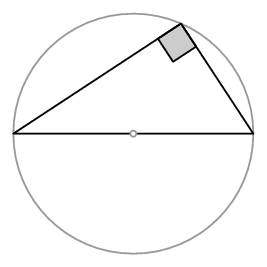 An ellipse is obtained from a circle by compressing it, say vertically by a factor $f$. If we do this in the direction perpendicular to the horizontal diameter we get an equation $$ y^{2} = f^{2} x(d-x) $$

for the ellipse, as on the left below. But if we project onto another diameter, we still get an ellipse together with a diameter and conjugate chords. In this skew coordinate system we also get an equation of the same form. 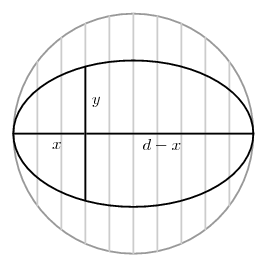 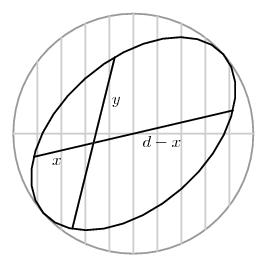 Therefore, in order to verify that a plane section of a cone is an ellipse, we must (a) find a diameter, say of length $d$; (b) find the conjugate diameter; (c) assign the ellipse the corresponding coordinate system and verify that an equation of the form $y^{2} = f^{2} x(d-x)$ holds. In doing this, I follow Heath's translation of the Conics, if a bit loosely.

Finding a diameter of a section

In this section I lead up to Proposition I.7 of the Conics (p. 5 of Heath's text). Suppose we are given a circle $C$ in three dimensions and consider the cone obtained by joining points of $C$ to a point $O$ not on $C$. Intersect it by a plane $\Pi$ that lies between $C$ and $O$. Let $E$ be its intersection with the cone. We want to see that $E$ is an ellipse. 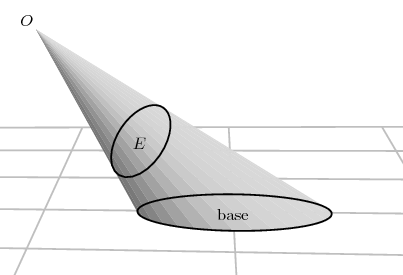 Find the intersection $\Lambda$ of $\Pi$ with the base plane. Choose $XX'$ a diameter of the base circle perpendicular to $\Lambda$. Its conjugate chords are the segments in $E$ parallel to $\Lambda$. In general, the diameter $D$ and these will be skewed - i.e. not mutually perpendicular. 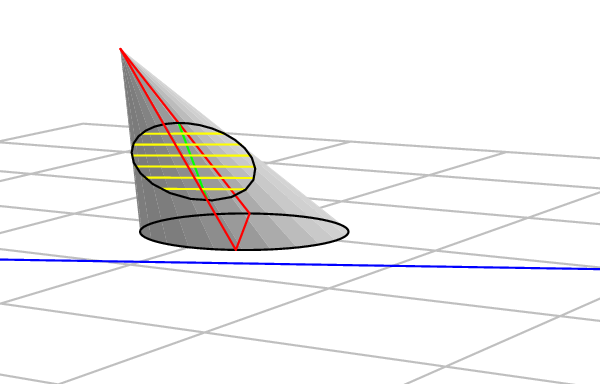 Apollonius' derivation of the equation

In this section I conclude the proof that a finite conic section is an ellipse. This is I.13 of the Conics (Proposition 3, p. 11 of Heath's text). 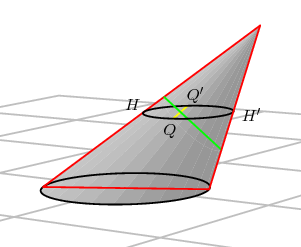 This reduces the original claim to the claim that the ratio of $HV\cdot VH'$ to $PV\cdot VP'$ is a constant. This means that we are now reduced to geometry only in the triangular slice - i.e. to plane geometry. But the figure above illustrates that as $V$ moves along $PP'$, the sizes of the triangles $HVP$ and $H'VP'$ change in inverse ratio, which means precisley that the ratio of $HV\cdot VH'$ to $PV\cdot VP'$ is a constant.

The constant can be evaluated explicitly from the figure to be $XY\cdot YX'/OY^{2}$.

It has probably often been thought that a conic section can be somewhat wider at one end than the other, but one case is famous. The Renaissance artist Albrecht Dürer was very well trained in mathematics. He bought his copy of Euclid in Venice in 1507 (one of the earliest of all printed editions), and it is now in the possession of the Herzog August Bibliothek in Wolfenbüttel. (You can see a photograph of its title page in this article.) But when he came to explaining how to draw conic sections in Unterweysung der Messung, his text on the mathematics of art, he erred. (Page 35 of the Dresden digital copy)

Apollonius' book of Conics is notoriously difficult to read, and not always rewarding. It is not totally unfair to regard much of it as a first step towards algebraic treatment of geometry. But it is impressive, certainly ranking in effort and ingenuity with other major works of mathematics such as Euclid's Elements or Newton's Principia mathematica. For the Conics above all, one wonders, how did Apollonius arrive at his results? As in what we have seen earlier, one of his major tricks is to reduce three-dimensional geometry to two dimensions, but even so it required an almost unbelievable skill in mentally manipulating objects in three dimensions. Did the Greeks have 3D models?