How to Read QR Symbols Without Your Mobile Telephone

How does your phone read the information in a QR code symbol? How is information stored on it? In this column I'll make a start, but really only a start, on answering these questions.... 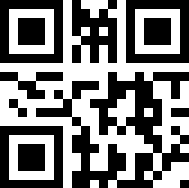 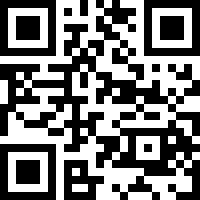 They can be a bit more decorative: 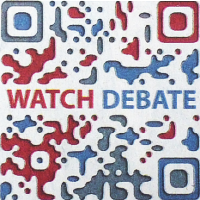 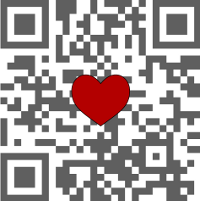 (The QR symbol on the left was an ad for the Canadian Liberal Party leaders' debate. On the right ... well ... it's February.) These do not exactly make much sense to the unaided human eye. They are, however, still quite useful, as this store display from Bonn, Germany shows in a hopeful if unusual hand-painted message about a store for rent: 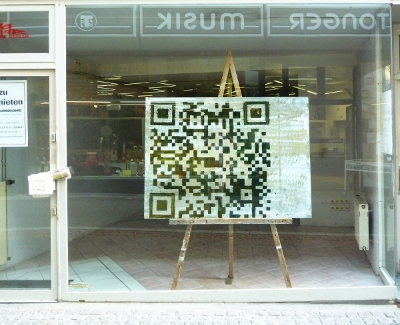 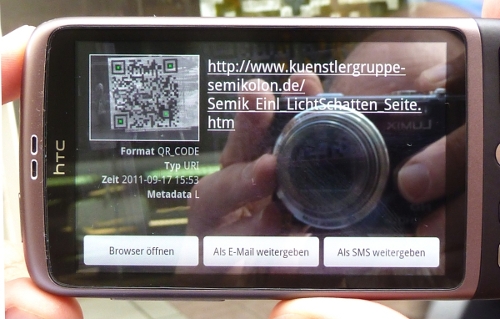 The point is that these symbols are not meant to be read by the unaided human eye, but instead by a computer's aided eye. If your mobile phone has a camera and the right app loaded into it, it can interpret one of these. In fact, this example is perhaps a bit out of date, since many phone apps nowadays will read the symbol and directly take you to a URL embedded in it. Other applications include some very useful ones such as linking your phone to a real-time bus-schedule, paying for downtown parking, recalling where your car was parked, and how to purchase advertised items. As well as some of more doubtful taste, such as learning all about someone's dearly departed.

How does your 'phone read the information in a QR code symbol? How is information stored on it? In this column I'll make a start, but really only a start, on answering these questions.

QR symbols were first developed by the Japanese company DENSO, a subsidiary of Toyota, apparently in order to track manufactured items. The company has released the patent for free public use. In Japan, even now, these symbols are far more common than elsewhere in the world.

The exact definition of QR symbols is contained in an ISO/IEC manual of about 114 pages. The manual is not light reading. One reason is that it contains much necessarily technical information, and the symbols are organized for efficiency rather than elegance and simplicity. Another is that there are several options for QR code symbols, and some correspondingly complicated programming is involved. Each symbol is a square array of smaller squares, which are called modules in the ISO manual. Sizes range from $21 \times 21$ to $177 \times 177$. Each size is indexed by a version number, ranging from $1$ to $40$. The size of version $V$ is $N \times N$ with $N = 17 + 4V$. Every symbol amounts to a layout of bits stored in modules, equal to $0$ or $1$ according to whether the module is light or dark. The bits are grouped into bytes of $8$ bits each, but the interpretation of the symbol is through a linear arrangement of bits. The point of the grouping into bytes is to allow for recovery from damaged symbols through what are by now classical and even ubiquitous techniques of error correction.

There are other variations. After a message has been chosen and appropriate bits added to enable error correction, a mask is laid over the symbol to make it easier for a device to figure out what it is looking at by randomizing the black and white pattern. Furthermore, there are different modes of interpretation. There is one for purely numeric input, one for simple alpha-numeric input, another for an extended form of standard ASCII text that incorporates the Japanese kana alphabet, and yet one more that allows the much larger set of Kanji, the character adopted by the Japanese from what were originally part of the Chinese language.

The modules in a QR symbol can be grouped into several distinct components:

Taking the mask off

The data bits in the symbol must be unmasked to see the original data bits. The mask id here, as we have seen, is $010$, and this mask is indicated in the following picture by red marks. In other words, the mask amounts to columns modulo $3$. The fixed pattern is not masked, nor are the format bits (which have their own mask). 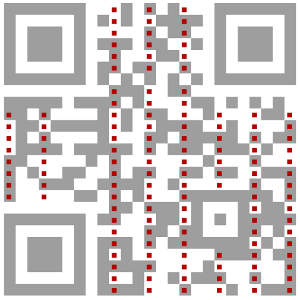 The modules are now numbered. The modules belonging to the fixed pattern and the ones belonging to the format region and the version are not numbered, so the numbering scheme has to avoid them. Basically, the numbering starts at the lower right, chooses next its left neighbour, and proceeds alternately up and down columns of width $2$, choosing as its next module the first available according to the avoidance rules: 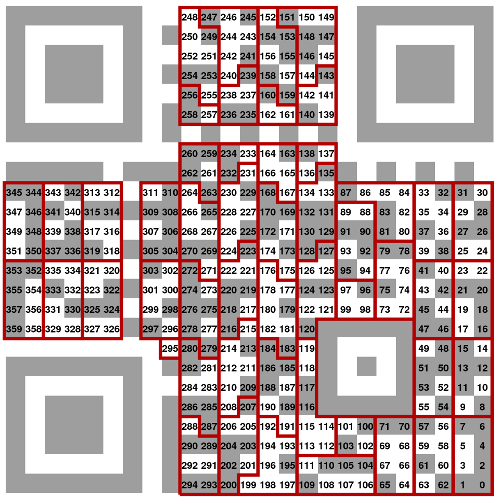 Groups of eight modules are arranged into bytes. This grouping plays a role only in case error correction is necessary, which it is not here. (The bytes are interpreted as elements in the Galois field of order $256$ in the BCH codes.) In the following diagram, the original data bits are black and grouped in bytes. 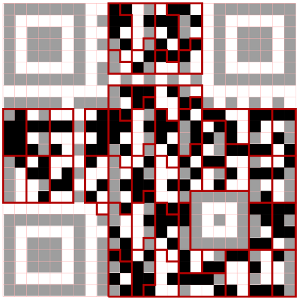 Web sites about the applications of QR code