In effect, stereographic projection wraps the plane around the sphere, missing only that one point...

It is impossible to draw maps of the Earth's surface on a flat surface in such a way that no distortion takes place. Put more mathematically, it is impossible to render paths on a sphere onto a flat surface in such a way that all distances remain the same. In drawing a map of a sphere some compromises must be made. On the other hand, the human eye likes certain properties of the Earth's surface to remain invariant in order to make sense of a map more easily. Most maps adopt one of two possible strategies---that areas are preserved or that angles are preserved. Stereographic projection is one way of making maps, and it adopts the second strategy. It has been used since ancient times for this purpose, and at least one of its basic geometrical properties was known even then.

What is stereographic projection? 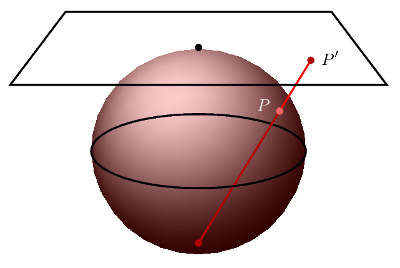 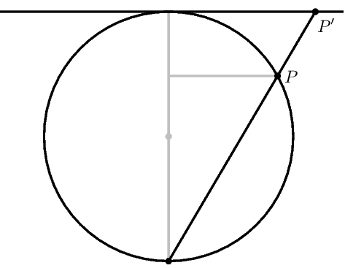 This construction fails only if $P$ is the South Pole itself. In effect, stereographic projection wraps the plane around the sphere, missing only that one point.

Theorem 1. Any circle that does not pass through the North Pole is mapped to a circle on the plane.

This was known to Greek mathematicians of Hellenistic times. More subtle, and not apparently known until the seventeenth century, is this:

I'll explain why these theorems are true in the next several sections. In the first of these I'll recall some elementary facts about plane geometry that will be needed later on. 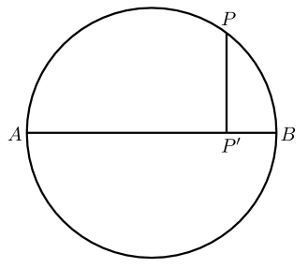 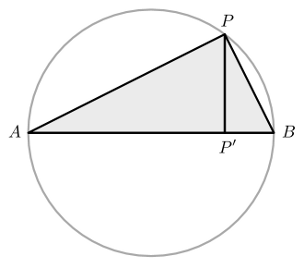 This follows from Pythagoras' Theorem. It can be rephrased as asserting that the triangles in the figure on the right are similar. 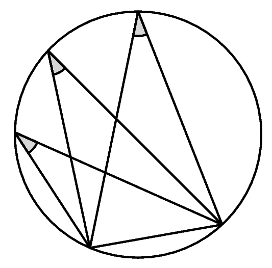 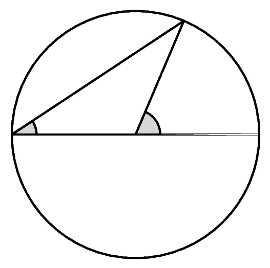 Place a circle in the plane, and choose some point $C$ not in that plane. Construct the cone with $C$ as vertex intersecting the plane in the given circle. 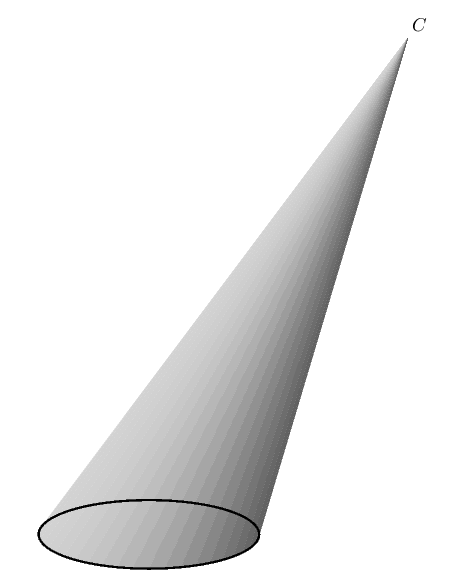 Any section of this cone parallel to the given plane is a circle. If the cone is a right cone--if its axis is perpendicular--then these are the only circular sections. But if this is not the case, there exist conjugate sections that are also circles. In fact, there exists a single family of them, all parallel to each other, as Proposition 5 of Book I of Apollonius' treatise on conics asserts. How does the argument go? 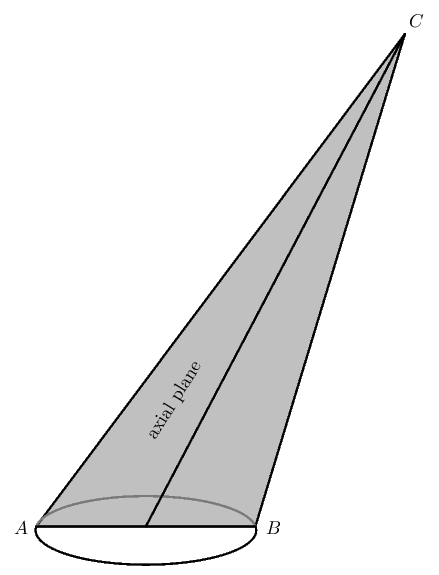 Construct inside the triangle $ABC$ below a contrary triangle $A'B'C$ similar to $ABC$ but with the opposite orientation. 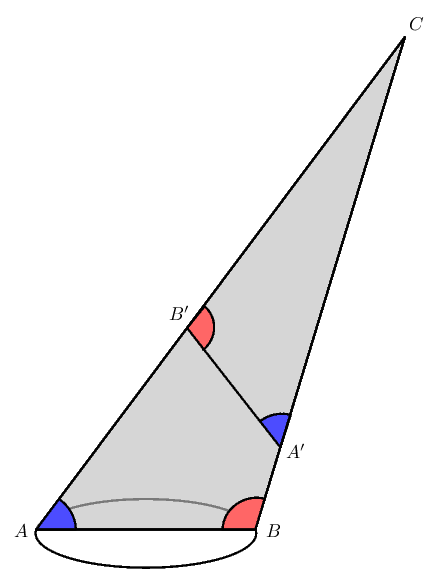 Erect through $A'B'$ a plane perpendicular to it. I claim that the intersection of the cone with this plane is a circle. 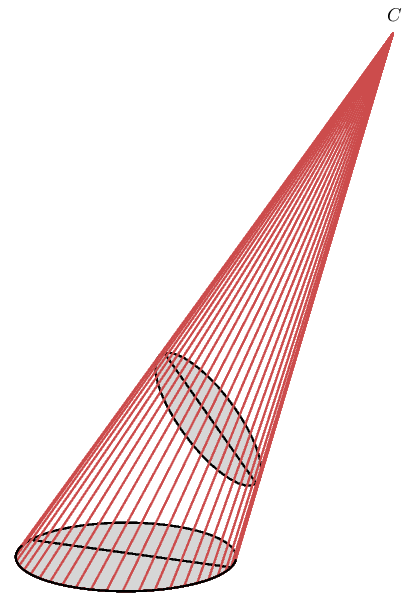 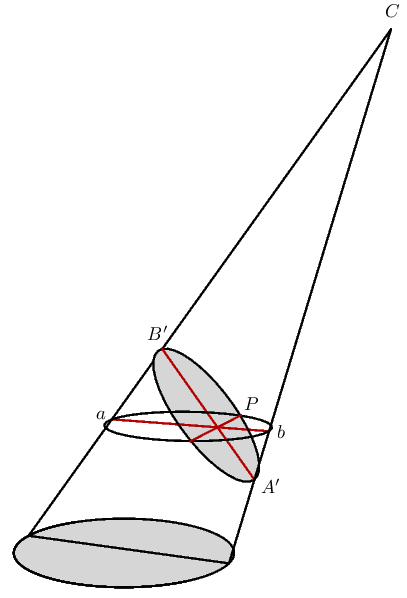 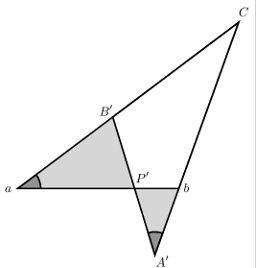 Finally, the next figure shows why this implies Theorem 1. 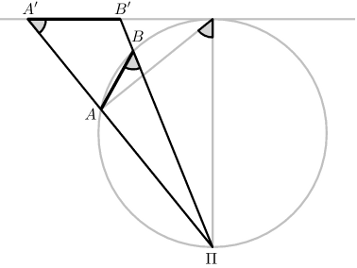 This concludes the proof of Theorem 1. This result is one of the first results in Apollonius' book on conics, and presumably one of the earliest non-trivial results known to the Greeks about conic sections.

Now to deal with Theorem 2.

What is it good for?

Historically, stereographic projection has been used since the Hellenistic era for making sky charts. This was explained first in the treatise On the planisphaerium by Ptolemy, although no instruments from that time are extant. Later on, Ptolemy's technique was applied to make astrolabes, which were used extensively throughout the middle ages, in both the Islamic world and in Europe. In the following photograph, taken from the Wikipedia image collection, you can see two sets of circles of which one is a set of latitudes around the North Star. 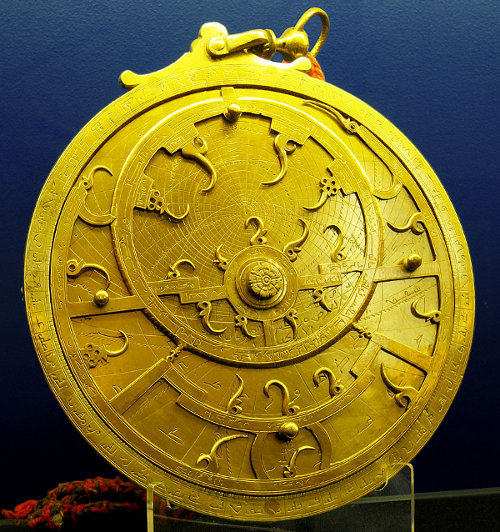 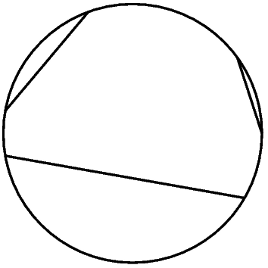 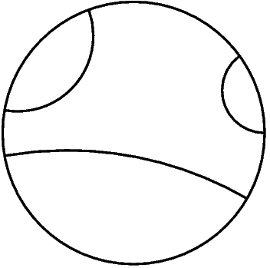 Stereographic projection allows you to pass from one to the other, after first lifting one of Klein's segments into the hemisphere lying over the disc. 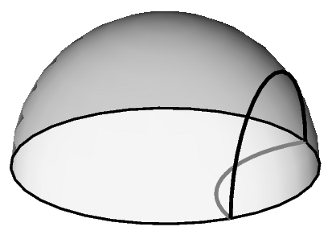 Where to learn more