The Knots in the Quipu, and in the Friar's Belt

In a canonical numerical quipu, each pendent (or subsidiary) displays a number: a positive integer, expressed in decimal notation...

Quipus and their knots 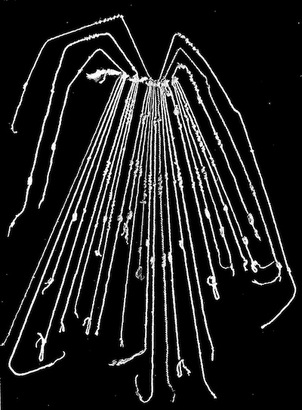 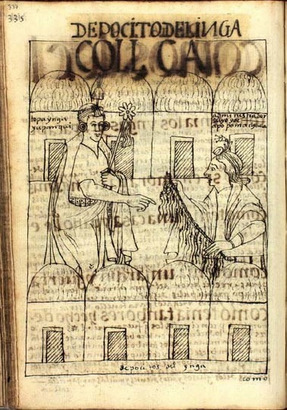 Left: a numerical quipu in the collection of the American Museum of Natural History, New York (Accession No. B-8713). In this example the pendents have no subsidiaries, but six top cords are attached so as to group the pendants four by four. As Locke's analysis shows, each top cord records the sum of the numbers encoded in knots on the four pendents in its group. This item, which Locke describes as "an example of the most highly developed form of the quipu," appears as the frontispiece to his work [Locke]. An even more intricate numerical relation, this time between different quipus, all found together, has been recently documented in [Urton and Brezine].
Right: Locke does not give the dimensions of that quipu, but they may be guessed by comparison with the quipu shown (with some of its knots visible) in this page from El primer nueva corónica y buen gobierno, by Felipe Guaman Poma de Ayala (1615). Image from the Guaman Poma Website, Royal Library, Copenhagen, Denmark, used under Creative Commons License. Caption: Storehouses of the Inca. We see an administrador, identified as Poma Chaua (an ancestor of the author) showing a quipu, presumably with some tally of the storehouses' contents, to Topa Inca Yupanqui (1471-93). Text is in Spanish and Quechua.

A quipu is a portable device made of (cotton or camelid wool) string in a two-dimensional array. A primary cord (also, main cord, transverse cord) "varying in length from a few centimeters to a meter or more" [Locke] supports several pendents (also, pendant cords) "seldom exceeding 0.5 meter in length" [Locke]; up to 1500 in the largest examples, but typically in the range from a few to several hundred. The pendents can bear subsidiary cords, which themselves can have subsidiaries, and so on, up to six levels in some instances [Ascher]. There may also be a set of top cords, attached so as to lie most naturally on the opposite side from the pendants. The pendents, subsidiaries and top cords each carry a sequence of knots, which record information. 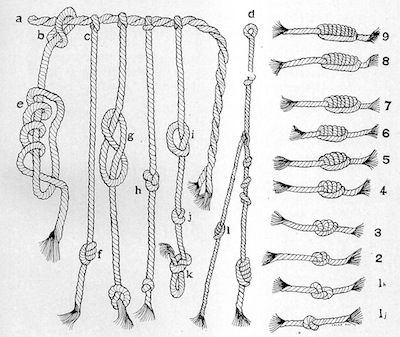 Locke's portrayal of primary cord, pendents and susidiaries, and of the three types of information-bearing knots that appear in standard ancient quipus: the overhand knot (i, j, 1j), the figure-eight knot (g, h, 1h), and the long knots tied as an overhand knot but casting the end through the loop from 2 to 9 times (2, ..., 9; 4 is shown loosened as e, and tied in the subsidiary as l; 3 also appears on a pendent as f, and 5 appears on pendent d which, without its subsidiary, encodes the number 135. As remarked in [Urton], each of these knots can be tied either right-hand or left-hand.

The grammar of knots

In a canonical numerical quipu, such as Locke's example shown above, each pendent (or subsidiary) displays a number: a positive integer, expressed in decimal notation, as follows:

The different levels are apparent in Locke's photograph, and even more precisely demarcated in the six-figure example linked to just above. As in Old Babylonian notation, the lack of a symbol for zero introduces a theoretically possible ambiguity: 210 and 2100 alone cannot be distinguished. But if just one cord in a quipu displays a number with a non-zero units place, then the distinctive knots used for that position, and the coherence of levels, will anchor the entire array. The ideal even spacing between levels shown in the six-figure example could compensate the (unlikely) absence of non-zero entries, in any position higher than units, across an entire quipu.

From a topological point of view

To a topologist, the knots in quipus are quite standard. When the two free ends of the overhand knot are joined the configuration forms the trefoil knot, knot $3_1$ in the standard knot table. Similarly the figure-eight knot appears as $4_1$. The first few long knots are in the table: the quipu knot 2 is $5_1$, 3 gives $7_1$ and 4 gives $9_1$. There are 165 distinct knots with 10 crossings; the table stops there. But if it went on, presumably the quipu 5 would correspond to $11_1$, ..., and 9 to $19_1$ since these torus knots are the simplest in each case.

Locke's loosened 4-knot, captured in a loop, can be deformed to the standard picture of $9_1$.

In [Urton] the two ways of tying a figure-eight knot in a cord are described as an S-knot (a. and b., front and back) or a Z-knot (c. and d.), in analogy with the two directions in which yarn can be spun.

The figure-eight knot is different from all the overhand knots in that its two mirror-image forms are topologically equivalent. The deformation can be achieved by loosening the knots and flipping selected loops over or under the rest of the knot.

The deformation from the S-knot figure-eight (form b.) to the Z-knot (form c.). In step 1, the red loop is flipped over the rest of the knot; in step 2, the blue loop is flipped under.

Garcilaso de la Vega's Commentarios Reales de los Incas (Lisbon, 1609) describe quipus in some detail. In particular (as quoted in [Locke, p. 40]) "... the knots for each number were made together in one company, like the knots represented in the girdle of the ever blessed Patriarch, St. Francis." Franciscan friars still wear such a belt; traditionally the knots are three, representing vows of poverty, chastity and obedience. In fact, these knots are topologically identical to long knots in quipu, but they are tied so as to be symmetric and consequently do not look the same.
The rule for tying one of the long knots is given in [Locke]: "It is formed by tying the overhand knot and passing the end through the loop of the knot as many times as there are units to be denoted. One end in then drawn taut, thus coiling the other about the strand the required number of times." The rule for tying one of the friar's knots is given in great detail here and is nicely explained by Friar Stephen Agosto of the Orthodox Anglican Society of St. Francis, in this video.

The equivalence between the quipu knots and the friar's knots with the same number of turns is not completely obvious. To maneuver one to the other in space requires some energetic twisting.

These knot projections show steps in the deformation from the 3-ring friar's knot to the torus knot $7_1$ and the quipu knot 3. The middle winding has been colored red for easier reading.

The writhe of a knot

The "energetic twisting" required to deform a friar's knot into the corresponding long knot can be quantified mathematically, using the writhe. This is an integer, associated to a knot, that measures its geometrical complexity. The writhe can be defined from a planar projection of the knot; it is not a topological invariant.

Some knots and their writhes. The standard figure-eight (without any extra independent loops) has writhe $0$. The overhand knot has writhe $+3$ if it is tied left-handed, and $-3$ if it is tied right-handed.
The friar's knot with three turns (tied right-handed) has writhe $-12$, while the topologically equivalent quipu long-knot 3 has writhe $-7$. In fact during the deformation from one to the other shown in steps a. through j. above, five separate independent loops are untwisted. This accounts exactly for the change in writhe, and explains how the effort required to carry out the deformation between actual knots will vary with the torsional rigidity of the cord.

Note: revised, May 5, 2014.
The revision corrects an error in the original account of the topology of the figure-eight knot. Thanks to Prof. Ian Agol for bringing the error to our attention.