We'll look at some measures that have been created to constrain gerrymandering...

Why is there such a disparity between the votes cast and the seats won? Though this is a complicated issue with several factors cited as influential, the process by which congressional districts are drawn is frequently cited as the most important.

Many states place limits on the legislature's power to draw congressional maps. For instance, most states require that districts be contiguous, meaning that one can walk between any two points in a district without leaving that district. Other requirements include respecting local political boundaries and the previous congressional map so that districts are reasonably stable. Before being weakened by a recent Supreme Court ruling, the Voting Rights Act also placed additional restrictions on certain states.

The term gerrymander refers to the act of dividing a state into districts that give unfair advantage to one political party. While there are many possibles ways to interpret what is meant by a "fair" division, two available strategies for gerrymandering are:

It may seem natural to try to create an algorithm that could be used to draw congressional maps impartially. An example described by Vickrey easily shows the difficulty with this approach.

Suppose that the support for two parties in a rectangular state that is allotted four representatives is geographically dispersed as shown. Notice that a 5 to 4 majority support the red party.

If we simply slice the state into four vertical districts, each party wins two seats. 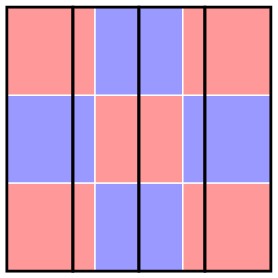 However, if we slice the state once horizontally and once vertically, the red party wins all four seats. 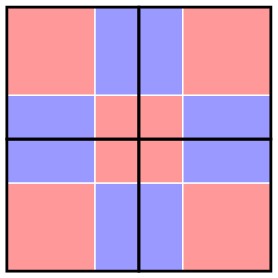 Besides showing that the results can vary considerably depending on which algorithm is used, this example shows how an algorithm can lead to the very effect we are trying to avoid.

Instead, we'll look at some measures that have been created to constrain gerrymandering. Many states require congressional districts to satisfy a compactness condition. While there is no single definition of compactness, the concept attempts to identify oddly shaped regions that may be the result of gerrymandering. We'll look at a couple of different notions that have been used to measure compactness before considering a separate notion called bizarreness.

We will consider four widely-cited measures of compactness. These measures are created by comparing a district to an "ideal" simple figure, such as a rectangle or circle, with the assumption that these figures are ideal because they involve a small number of choices making them of less use for gerrymandering. A tabulation of these four measures may be found here and here.

All four measures vary from 0 to 1 with districts scoring lower judged to be less compact and hence more possibly the result of gerrymandering.

The bizareness of a district

Notice that the measures we have so far considered penalize states with irregular boundaries. In addition, they measure only the shape of the district and do not account for how the population is distributed within the district.

The last method we looked at above, the Convex Hull measure, assessed a district by measuring how convex the district is. In the same spirit, a more recent measure has been proposed by Chambers and Miller, which they call the bizarreness of a district and which may be thought of a measure of the convexity of a district.

Remember that a convex set is characterized by the fact that any two points in the set are connected by a straight line segment that is wholly contained in the set. Chambers and Miller define the bizarreness of a district to be the probability that the shortest path within the state between any two people in the district stays within the district. For instance, a convex district would have a bizarreness score of 1. Since we consider only the shortest path within the state, states with irregular boundaries are not penalized. 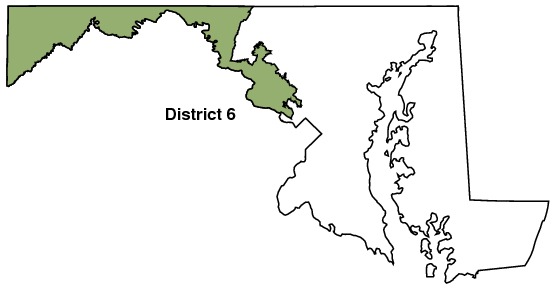 Applying these measures to Maryland's 6th District, we see that

While the irregular shape of this district results from the state's boundary, the first four measures indicate that this district may be the result of gerrymandering. The bizarreness measure, however, indicates that it is most likely not.

If we look instead at Maryland's 3rd District, we find that all five measures indicate the possibility of gerrymandering. 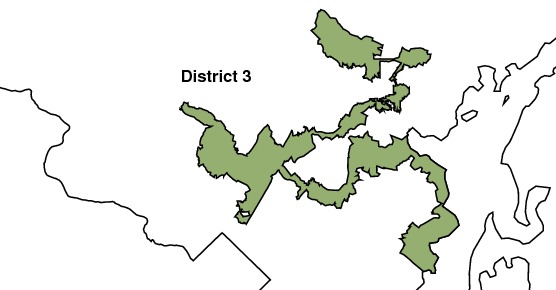 Hodge, Marshall, and Patterson have amended Chambers and Miller's definition of bizarreness to make it somewhat easier to compute. Generally speaking, it takes some work to determine the shortest path between two points within a congressional district. Hodge and his collaborators sidestep this issue by defining a notion of semi-visibility.

Two points within a district are said to be semi-visible if the shortest path joining them only leaves the district at points on the state boundary. This is fairly straightforward to determine using the cartographic boundary files of the district and state. They then define a new measure, the boundary-adjusted convexity coefficient, to be the probability that two people in the district are semi-visible. This may again be computed using census tracts and yields results that are similar to Chambers and Miller's bizarreness measure.

As we said earlier, there is not agreement about what constitutes a fair congressional map. We have therefore been looking at an issue where reasonable people may not even agree about the nature of the problem.

Instead, we've looked at a few of the common measures that are used to indicate the possibility of gerrymandering. These have, in fact, formed part of the basis for legal arguments challenging some congressional maps.

While none of the measures is perfect, taken together they may be effective for evaluating redistricting plans. A quick Google search will reveal any number of alternative measures.

Of course, there is always what one writer has humorously called the Grofman Interocular Test: like pornography, you recognize gerrymandering when you see it.