Why Do We Expect Lots of Twin Primes?

One important question is, how are prime numbers distributed among the integers? The answer is, in a very few words, rather randomly, given certain basic statistics...

Many years ago it was conjectured that there are an infinite number of pairs of prime numbers $p$, $q$ with $q = p+2$. There has been some recent (and famous) progress on this problem. I shall say little about recent progress, but discuss instead what we expect--rather than what we know--about such pairs. Nothing I shall say is new, and I have to some extent merely elaborated on what Andrew Granville says in his recent expository note on the recent advances.

How many primes do we expect?

A prime number is a positive integer that has no divisors except itself and $1$. The definition is simple, but as soon as one starts to explore the significance of prime numbers one realizes that they exhibit much subtle behaviour. One important question is, how are prime numbers distributed among the integers? The answer is, in a very few words, rather randomly, given certain basic statistics. What do I mean by this?

Well, here is a square array picturing all the primes up to $400$: 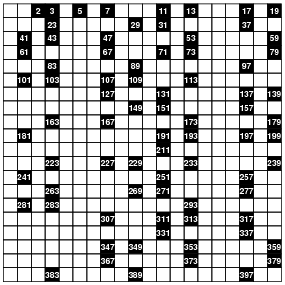 There are some patterns in this array, some of which I'll comment on later. Most of those you perceive are caused by some artefact of the display. For example, every other column is essentially empty, and this is because the only even prime is $2$. Also, every fifth column is essentially empty. More interesting are the twin prime pairs (some of which are not so visible because they split into two rows, such as $59$, $61$), and also some patterns related to the last digits displayed. These are what might be called local patterns. There are no global ones apparent.

There has been much effort put into extremely efficient ways to produce prime numbers, but these days even a very simple program takes only a small amount of time to make large lists of primes. One of the most fruitful programs will make a large list of primes and then use this to calculate the function $\pi(n)$, the number of primes $\le n$.

The approximation looks great! So, even if $\pi(x)$ bounces around a bit, apparently without much pattern, we have a fairly good estimate for it, which means we have a good idea of how the primes grow, at least on the average.

It should be kept in mind, however, that the apparent smoothness is deceiving. Close up, here is what the top two curves look like:

and others. It has been conjectured that there are an infinite number of them, but although there is much empirical evidence for this it has not yet been proved.

Perhaps the strongest evidence is a formula that approximates the number $\pi_{2}(x)$ of twin primes $\le x$ remarkably well. I am not quite sure about the origin of this formula, but it first appeared in a paper by G. H. Hardy and J. E. Littlewood (themselves a pair of twin primes) dated 1923. The paper contains several similar formulas, all based on the same method, which they had used to attack many problems earlier. This was their circle method. Their derivation of the formula for $\pi_{2}(x)$ is not at all rigourous, but it is very convincing. There is a succinct account of this in an appendix to Andrew Granville's article.

But just after World War II Lord Cherwell (Frederick Lindemann) suggested a more elementary probabilistic (and still not rigourous) derivation. This led to a colaboration with E. M. Wright and eventually to a posthumous joint publication. This is explained in Section 22.20 of the well-known text by Hardy and Wright. A slightly more elementary version of this can also be found in an appendix of Granville's article (Section 2.5). I follow him.

The starting point for the plausible reasoning is our estimate for $\pi(x)$, the number of primes less than or equal to $x$. The basic idea of the derivation is that the prime numbers are, to a good extent, distributed randomly. We know that in the neighbourhood of $x$ the density of primes is about $1/\log x$. If the primes were distributed randomly, then the probability that any two given numbers near $x$ are primes would then be just the product of local probabilities, which is $1/\log^{2} x$. This certainly is specious reasoning, since if $n > 2$ the probability that both $n$ and $n+1$ are primes is $0$, while the fact that $p$ is a prime would seem to increase the chances that $p+2$ is. There are similar considerations to take into account because of possible divisibility by other small primes, too, in the neighbourhood of $x$.

The text of Hardy and Wright lay out a more careful analysis that makes the intuitive leap a bit clearer.

A special case of a conjecture made originally by L. E. Dickson is that if there are no prime obstructions to $(a_{i})$ then there exist an infinite number of prime sequences of the form $(n +a_{i})$.

What has happened recently

This not the place to tell the whole story, which has been covered thoroughly in other places. I recommend particularly the Quanta article by Erica Klarreich for a popular account, and Granville's essay for a more technical one. I just want to state a bit more precisely than in Klarreich's account what the most famous of the new results is.

It is due to Yitang Zhang. The simplest statement of what he proved is that there exist an infinite number of intervals $[n, n+70,000,000)$ containing at least two primes. This is weaker than the twin primes conjecture, but conceptually very close to it. In subsequent work (by many mathematicians) the size of the gap has been severely reduced, but there is presumably no way to reduce it to $2$ with current methods.