This column will present the game-theoretic results contained in the original Gale-Shapley paper along with Roth's subsequent analysis. Pathak calls the deferred acceptance algorithm "one of the great ideas in economics," and Roth and Shapley were awarded the 2012 Nobel Prize in economics for this work...

Every year, 75,000 New York City eighth graders apply for admission to one of the city's 426 public high schools. Until recently, this process asked students to list five schools in order of preference. These lists were sent to the schools, who decided which applicants to accept, wait-list, or reject. The students were then notified of their status and allowed to accept only one offer and one position on a waiting list. After the students had responded to any offers received, schools with unfilled positions made a second round of offers, and this process continued through a concluding third round.

This process had several serious problems. At the end of the third round of offers, nearly half of the students, usually lower-performing students from poor families, had not been accepted into a school. Many of these students waited through the summer only to learn they had been matched with a school that was not on their list of five schools.

This process also encouraged students and their parents to think strategically about the list of schools they submitted. Students that were rejected by the school at the top of their list might find that their second-choice school had no vacancies in the second round of offers. This made it risky for many students to faithfully state their true preferences, a view encouraged by the Education Department's advice that students "determine what your competition is" before creating their lists of preferred schools.

Lastly, schools would often underrepresent their capacity hoping to save positions for students who were unhappy with their initial offerings.

In the end, the process couldn't place many students while it encouraged all parties, both students and schools, to strategically misrepresent themselves in an effort to obtain more desirable outcomes not possible otherwise. Widespread mistrust in the placement process was a natural consequence.

Using ideas described in this column, economists Atila Abdulkadiroglu, Parag Pathak, and Alvin Roth designed a clearinghouse for matching students with high schools, which was first implemented in 2004. This new computerized algorithm places all but about 3000 students each year and results in more students receiving offers from their first-choice schools. As a result, students now submit lists that reflect their true preferences, which provides school officials with public input into the determination of which schools to close or reform. For their part, schools have found that there is no longer an advantage to underrepresenting their capacity.

The key to this new algorithm is the notion of stability, first introduced in a 1962 paper by Gale and Shapley. We say that a matching of students to schools is stable if there is not a student and a school who would prefer to be matched with each other more than their current matches. Gale and Shapley introduced an algorithm, sometimes called deferred acceptance, which is guaranteed to produced a stable matching. Later, Roth showed that when the deferred acceptance algorithm is applied, a student can not gain admittance into a more preferred school by strategically misrepresenting his or her preferences.

This column will present the game-theoretic results contained in the original Gale-Shapley paper along with Roth's subsequent analysis. Pathak calls the deferred acceptance algorithm "one of the great ideas in economics," and Roth and Shapley were awarded the 2012 Nobel Prize in economics for this work.

Besides matching students to schools, deferred acceptance has been applied in a wide variety of contexts, such as matching medical students to residency programs. In what follows, we will describe the algorithm within Gale-Shapley's original context, the stable marriage problem.

Suppose we have an equal number of men $M=\{m_1, m_2,\ldots, m_n\}$ and women $W = \{w_1, w_2, \ldots, w_n\}$. Every man lists the women in order of his preference, and every woman lists the men in order of her preference. We would like to arrange marriages between the men and women so that there is not a man and a woman who prefer one another to their spouses.

Before we go any further, let's acknowledge that our aim here is to model a mathematical problem. We will not, for instance, consider the realities of same-sex marriage, that individuals don't necessarily identify as either strictly male or female, and that women often propose to men. These issues all lead to mathematical situations that differ significantly from this one, which we hope to apply, more realistically, to the problem of matching students with schools.

Furthermore, it is relatively straightforward to extend this discussion to situations where there are an unequal number of men and women or where we allow polygamous matchings in which parties in one group may be matched with more than one party from the other group, which applies when, say, schools accept more than one student. 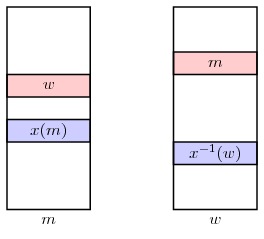 In their 1962 paper, Gale and Shapely demonstrated that, given a set of preferences for every man and woman, there is always a stable matching; even better, they showed how to find a stable matching by applying the deferred acceptance algorithm, which we now describe.

Notice that if $m$ proposes to $w$ at one step of the algorithm and $w'$ at a later step, then $m$ must prefer $w$ to $w'$. This means that $m$ cannot propose to a woman twice, which implies that the algorithm will eventually terminate. 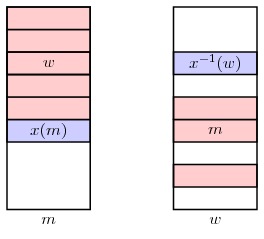 It is now easy to see that the matching $x$ provided by the Gale-Shapley algorithm is stable. Suppose that a man $m$ prefers a woman $w$ more than his match $x(m)$. At some step of the Gale-Shapley algorithm, $m$ proposed to $w$. Since $w$ is not $m$'s ultimate match, however, she must have rejected $m$ meaning she prefers $x^{-1}(w)$ to $m$. Therefore, it is not possible for $m$ and $w$ to prefer each other to their matches.

Let's begin by assuming there is another matching $y$ and a man $m$ such that $m$ prefers $y(m)$ to $x(m)$. We will see that this cannot happen if $y$ is a stable matching. 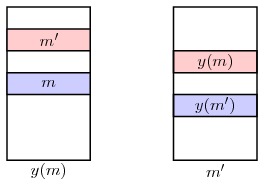 In this way, we see that $x$ is the $M$-optimal stable matching; every man is at least as happy with his match in $x$ as he is in another stable match $y$.

Simple examples show that the matching $x$ is not always optimal for the women. There is, however, a $W$-optimal stable matching: we simply apply the Gale-Shapley algorithm with the roles interchanged so that women propose to men.

We have now seen that it is possible to create stable matchings with the Gale-Shapley algorithm and that these matchings are even the best possible for one set of participants. So far, we have assumed that each person represents his or her true preferences accurately. However, it seems possible that a man may attempt to obtain a more desirable match by misrepresenting his true preferences.

We will show that revealing one's true preferences is, in the language of game theory, a dominant strategy for men. This means that, assuming all other men and women keep the same preferences, a man cannot obtain a more desirable match by misrepresenting his preferences.

We make the following observations:

This is fairly straightforward to see. Remember that $y$ is stable with respect to the preferences $P'$ since $y$ is obtained by the Gale-Shapley algorithm. This means that no man $m$ and woman $w$ prefer one another (in $P'$) to their match in $y$. However, this implies that $y$ is stable in $P''$ as well; the only party whose preferences have changed is $m_m$ and, since he has moved $y(m_m)$ to the top of his list in $P''$, he finds his match under $y$ with respect to $P''$ at least as desirable as he does with respect to $P'$.

Notice that we are assuming that the manipulator fares no worse under $y$. In fact, he misrepresents his preferences hoping to improve his match. 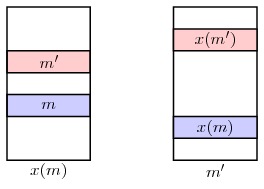 We have now assembled everything we need to explain why revealing one's true preferences is a dominant strategy for men. We assume that all the other men and women keep the same preferences, and we will show that the manipulator does not improve his match: either $y(m_m) = x(m_m)$ or $m$ prefers $x(m_m)$ to $y(m_m)$.

It follows that $m$ is the only man who proposes to $w$. If not, she would have to reject a man whom she had previously accepted conditionally and that man would need to make another proposal in a subsequent step. Therefore, $y(m) = x(m)$.

If there are some men she has rejected, denote by $m'$ the man she most prefers among that group. This man $m'$ is the one she rejects at step $s$ to accept $m$. Therefore $m'$ proposes to his match at a step later than $s$, which means that $y(m') = x(m')$ by the inductive assumption. 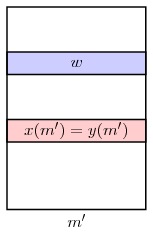 Curiously, examples show that it is possible for other men who propose to their match before step $r$ to improve their match. The misrepresentation by the manipulator $m_m$ does not improve his own match, but it might improve the match of others!

Returning to the question of matching students to schools, we should ask which group will be allowed to make the proposals. Running the algorithm with students making the proposals gives the students no incentive to misrepresent their preferences though schools may have an incentive to do so. We would, however, expect that a school's misrepresentations would be generally applied to students and, hence, more easily detected. Schools may also be compelled, perhaps through transparency requirements or other legal means, to avoid certain types of misrepresenation, such as racial discrimination.

Indeed, one of Roth's collaborators, Atila Abdulkadiroglu, says he has received calls from parents looking for inside advice on how to better their student's match. His reply is simple: "Rank them in true preference order."

Stability is an intuitively appealing condition to impose on a matching system, such as the New York City school application process. In a stable match, no party has an incentive to seek a different match; for instance, any woman preferred by a man to his wife is not available to him since she prefers her husband to him.

One may ask, however, if evidence supports the importance of the role played by stability in matching systems. Indeed, Roth and his collaborators have studied many different markets with this question in mind. For instance, the process by which American medical students are matched to residency programs was modified in the 1950s to one that closely resembles the deferred acceptance algorithm. This system has proved to be remarkably successful, and, as a result, a British Royal Commission recommended each region of the British National Health Service adopt a similar system.

As it turns out, each region adopted a slightly different matching algorithm since the details of the American system were not described in the American medical literature. The systems in some regions thrived while those in other regions failed. Roth and his collaborators determined that the stable systems were the ones that succeeded while the unstable ones failed.

About the application of game theory to economics, Roth writes that "the real test of our success will be not merely how well we understand the general principles which govern economic interactions, but how well we can bring this knowledge to bear on practical questions of microeconomic engineering." Indeed, examples like the New York City high school application process give testimony to this success.