After playing the game for a while, two natural questions appear, which we will explore: "How many cards need to be turned face up to guarantee the presence of a set?" and "What is the probability that the initial twelve cards do not contain a set?"

[Note: This is the first of two of David Austin's columns about SET. Also see "Game. SET. Polynomial."]

SET® is one of the rare card games simple enough for children to play and rich enough to keep adults engaged. After playing a few games, interesting combinatorial questions appear whose study reveals the game's elegant mathematical structure.

On each SET card is printed a number of symbols, as seen on these typical cards.

Three cards are said to form a set if each of the four features, considered individually, is the same on each card or different on each card. For instance, these three cards form a set because each card has the same number (two) and the same shading (solid) but no two cards have the same color or shape.

After turning 12 random cards face up, players score points by identifying and removing sets. Here is a typical hand:

One set from the hand above is shown below. There are three more sets, and readers may benefit from spending some time looking for them. (You may play online as well.)

If we are given two cards, there is a unique third card that creates a set. For instance, if the first two cards share the same color, then so must the third. However, if the shapes on the two cards are different, then the third card must contain the remaining shape.

Using this observation, one may find all the sets in a hand by considering each pair of cards and checking whether the third card that forms a set with that pair is in the hand.

After playing the game for a while, two natural questions appear, which we will explore: "How many cards need to be turned face up to guarantee the presence of a set?" and "What is the probability that the initial twelve cards do not contain a set?"

Shown here is a hand with 20 cards that contains no set.

As we'll see, it takes 21 cards turned face up to guarantee that there is a set. Curiously, this was discovered in 1971, a few years before SET was invented, by Pellegrino in a somewhat different context. We will explain this fact along the lines of Davis and Maclagan's elegant proof.

Conversely, if we fill up the plane by placing copies of this $3\times3$ grid next to one another, we see that every set lies on a line as well.

For each feature of the SET cards, we associate the three possibilities with an element of ${\Bbb F}_3$. More specifically, the variable $x_1$ will take on values 0, 1, or 2 depending on the color of the card. There is no preferred way to set up this association so we choose that $x_1=0$ will denote a red card, $x_1=1$ a green card, and $x_1=2$ a purple card.

Putting these two observations together, we obtain an algebraic description of a set:

Notice that this condition tells us explicitly how a pair of cards determines the third member of the set; given a pair of cards $c_1$ and $c_2$, then $c_3 = -c_1-c_2$ completes the set.

This condition may also be understood geometrically. 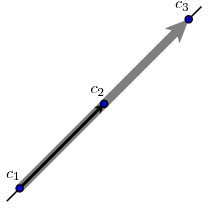 This leaves us with the pleasing fact that

Using this correspondence, we may rephrase the question "How many cards need to be turned face up to guarantee a set?" as "How many points in a subset of ${\Bbb F}_3^4$ guarantee a line in that subset?"

Before digging into this question, let's spend a little more time thinking about geometry in ${\Bbb F}_3^d$ as some combinatorial ideas that will soon be helpful arise naturally. 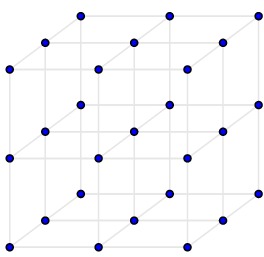 We may also consider planes in ${\Bbb F}_3^3$, each of which contains nine points. 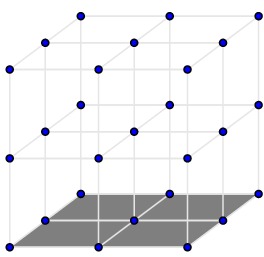 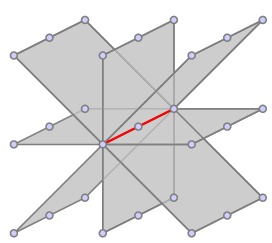 We will build up to this question by first answering the same question in lower dimensions ${\Bbb F}_3^d$. By a $d$-cap, we mean a subset of ${\Bbb F}_3^d$ containing no lines. We call a $d$-cap of the largest possible size maximal and denote its size by $m_d$.

If we try to add points to the following 3-cap, which contains nine points, we begin to suspect that $m_3 = 9$. 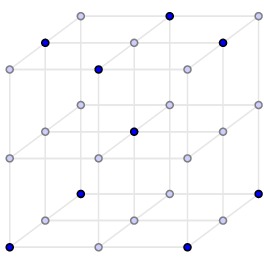 To see that this is true, Davis and Maclagan are guided by the ideas we saw when $d=2$; in that case, we divided ${\Bbb F}_3^2$ into three parallel lines and counted the points in the intersections of these lines with the cap $C$.

Assuming that we have a cap $C$ with 21 points, we consider families of three parallel hyperplanes $H_1$, $H_2$, and $H_3$. Counting these as before shows that there are 40 such families.

With a little work, it can be shown that there are no nonnegative integer solutions of these equations, which means there cannot be a 4-cap with 21 points. This shows that $m_4 = 20$.

To do this, we could use the natural symmetries of the SET deck to reduce the possible hands that need to be checked. If we permute the colors of the cards in a hand, for instance, we would not change whether a given hand contains a set. Since we can permute each feature and we can permute the features, there are a total of $3!^4 \cdot 4! =$ 31,104 symmetries that can be used to simplify the problem.

Here is a tabulation of Knuth's results. For each $n$, we state the number of setless hands $S_n$ with $n$ cards, the number of hands $D_n$ that are distinct under the group of affine transformations, and the fraction of hands $F_n$ that are setless.

As we followed Davis and Maclagan's argument, we found the size of a maximal cap $m_d$ as $d$ increased from 1 to 4. There is no reason to stop there; we could imagine that the SET cards have a fifth feature, such as texture, and play the game with a deck of $3^5 = 243$ cards.

While Davis and Maclagan's methods do not allow us to determine the size of a maximal 5-cap, a result of Edel, Ferret, Landjev, and Storme shows that $m_5 = 45$. Once again, they look at families of hyperplanes and count the number of points in the intersections of these hyperplanes with a subset of ${\Bbb F}_3^d$. Interestingly, they use the Fourier transform to study these counts and relate them to the number of lines contained in that subset.

The SET website says this about the inventor of SET, Marsha Jean Falco, and the origins of the game.

Marsha was a Population Geneticist who was trying to understand whether epilepsy in German Shepherds is inherited. To study the genes and chromosomes in the dogs? cells, Marsha created file cards with blocks of information for each dog. Because certain blocks of information were the same on each file card, she drew symbols to represent blocks of data, rather than writing out the data. She used symbols with different properties to represent different gene combinations. While explaining the combinations to the veterinarians she was working with, Marsha decided there could be some fun in the combinations of symbols and SET was born. Over the years, Marsha refined the game by playing with her family and friends and it was finally released in 1990.

It is remarkable how such a simple game leads to interconnected ideas in linear algebra, finite geometry, combinatorics, and analysis.