Hidden Symmetries of Labyrinths from Antiquity and the Middle Ages

The purpose of this column is to point out that the great majority of labyrinth designs share a topological symmetry which, while not obvious, cannot be accidental... 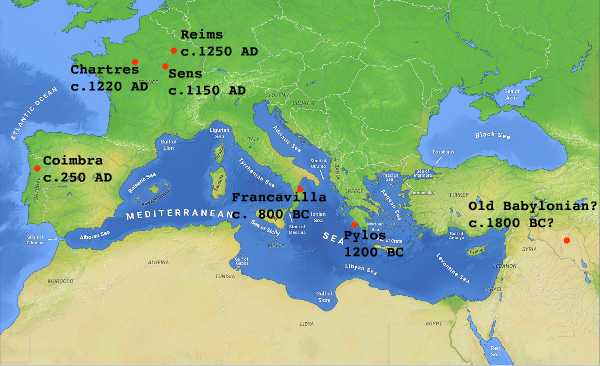 Sites mentioned in the text, with associated dates. Map of the Mediterranean Sea from Wikimedia commons.

The tradition of drawing labyrinths (patterns in which a single complicated path leads from one designated location to another) flourished in the Mediterranean region, and then beyond, starting certainly in pre-history and ending at the Renaissance, when labyrinths became supplanted by puzzle patterns in which the two locations are given, but the path must be discovered; sometimes only patterns of the second type are referred to as "mazes" but usually the two words are used interchangeably. The purpose of this column is to point out that the great majority of labyrinth designs share a topological symmetry which, while not obvious, cannot be accidental.
All the labyrinths mentioned in this column, except the first and last, are documented in Hermann Kern's encyclopedic Through the Labyrinth: Designs and Meanings over 5000 Years, Prestel, New York, 2000.

A labyrinth tablet from Mesopotamia. 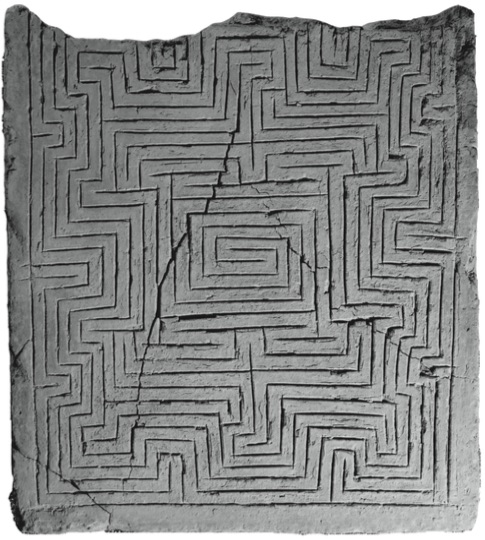 The Swedish mathematical assyriologist Jöran Friberg recently published the tablet MS 3194 from the Schøyen collection. Exactly where and when this tablet was written is not known, but according to Friberg it may well date back to the Old Babylonian period, around 1800 BC. The tablet, damaged near one end, measures approximately 10 $\times$ 11 cm. Comparison with another similarly symmetric tablet (MS 4515) allows the missing part of the pattern to be reconstituted. The labyrinth has one opening on each side; the path from one to the other traverses the entire pattern. 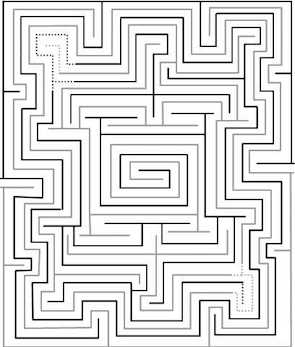 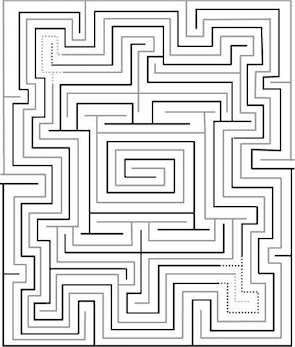 The reconstructed walls of the labyrinth on MS 3194 form two connected pieces, shown here in black and grey, which are topologically identical (a small, presumably unintentional, deviation from identity is shown with dotted lines), but rotated half a turn one with respect to the other. So the pattern has $180^{\circ}$ rotational symmetry: the rotation interchanges black and the grey but leaves the labyrinth unchanged.

The "Cretan maze" on a tablet from Pylos 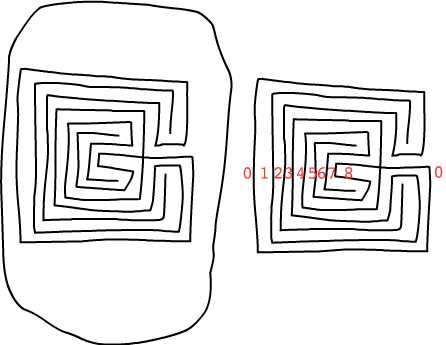 Labyrinth on a tablet from King Nestor's palace in Pylos.

The oldest securely dated labyrinth design appears on the back of an accounting tablet found in the ruins of King Nestor's palace in Pylos, on the western shore of Greece. The tablet (7$\times$5.7 cm) was baked when the palace burned in 1200 BC. The design on this tablet is often called the Cretan Maze. It appears on coins minted in Knossos on Crete during the 5th century BC and later, and represented the legendary labyrinth where King Minos kept the Minotaur.

The symmetry of the level sequence suggests that there is a symmetry relating the outside of the maze and the center. This can be made easier to see by enlarging the central area. 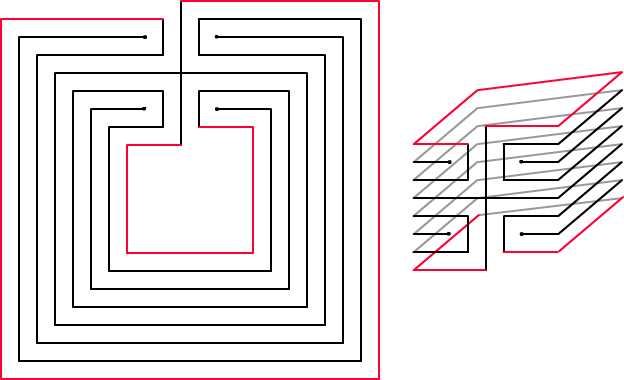 The Cretan maze redrawn with the central area enlarged, and then folded around a cube in three dimensions.

Enlarging the central area shows the symmetry between the central wall and the outer wall, both shown in red here. The symmetry can only be made geometrically perfect by deforming the pattern up into three dimensions, so that the maze covers four walls of a cube. Then, just as in the Babylonian example, a $180^{\circ}$ rotation (here, about an axis perpendicular to the screen) takes the pattern exactly to itself.

The maze implicit in a loom weight from Francavilla. This weight was 14cm high and 14cm wide at the base.

Excavations in the ruins of the Greek Acropolis in Francavilla Marittima in southern Italy yielded a large number of loom weights, many bearing labyrithine designs, dating back to the ninth--or the first half of the eighth--century BC. What is actually drawn on the weights is the path through a maze, which has led to misinterpretation since these lines do not make sense as maze walls. There are several patterns with different numbers of levels, but they all have 4-fold rotational symmetry. This means that they cannot be labyrinths strictly speaking; additionally they have no entrance or exit: each of the four paths circles endlessly through the design. Nevertheless, along with the symbolic congruence of Ariadne's thread with the practice of weaving, they have clear kinship to the Cretan design, and they share the additional "three- dimensional" $180^{\circ}$ rotational symmetry when they are drawn on the sides of a cube, as shown here. (The walls on loom-weight mazes with an odd number of levels like this one have two components, shown in blue and black in this illustration, which are interchanged by the symmetry).

A Roman mosaic labyrinth in Coimbra 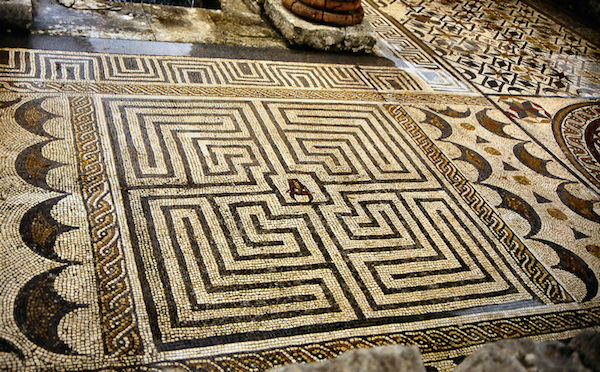 The Romans left mosaic floors throughout their empire. Several of them have this form of decoration: four linked copies of a Cretan-style labyrinth, with the first connected to the outside and the last to the center. The connection to the legend of the Minotaur was often explicit; here it is evidenced by the bull's head in the central space. 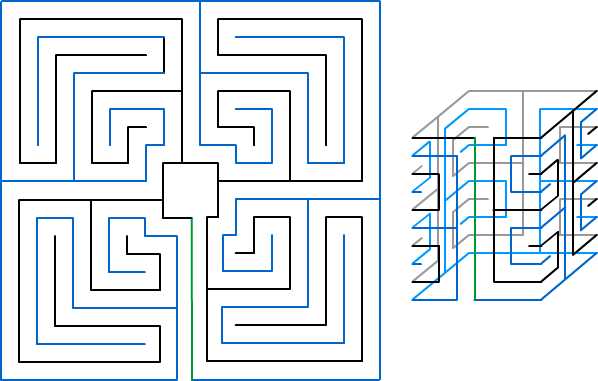 Analysis of the Coimbra labyrinth.

Since there is a single entrance and a single exit, the labyrinth cannot have perfect 4-fold rotational symmetry, but it does have the same topological symmetry between inside and outside as the Cretan maze. Wrapping the maze around a cube allows this symmetry to be realized by a $180^{\circ}$-degree rotation about an axis perpendicular to the page. Here the walls, minus the central divider shown in green, form two connected components which are interchanged by the symmetry. 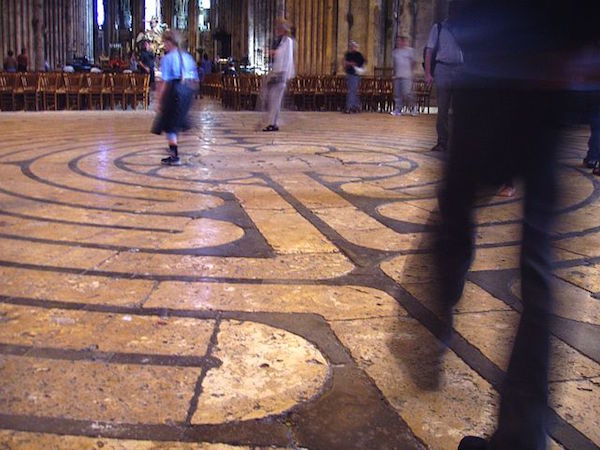 Children and tourists experiencing the labyrinth in Chartres Cathedral. Image from Wikimedia Commons

Despite their heathen association with the Minotaur (we know that in Chartres there was a central brass plaque explicitly mentioning the connection), floor labyrinths were installed in several gothic cathedrals. These mazes were large enough, typically 10m across, so that one could walk along the path from the entrance to the center. Of these three, only the one in Chartres still exists; the others were torn up during the 18th century because, we are told, the children and tourists they attracted were disturbing worship.

The plan of the Chartres labyrinth, and its development in the plane. Here and below, for simplicity, the rectified maze is drawn with two copies of the central divider, and is not shown wrapped about a cube. The overall $180^{\circ}$ rotational symmetry is still clear; it exchanges the blue and the black parts of the walls. Labyrinth image from Doublet de Boisthibault, "Notice sur le Labyrinthe de la Cathédrale de Chartres," Revue Archéologique 2 437-447 (1851-52).

The labyrinth in Reims Cathedral, destroyed in 1778, was modified in the four corners (without changing the overall topology) to accomodate pictures of the architects of the cathedral. The topology is not the same as Chartres: the path segments are different, and the new switching pattern at the central divider has them traversed in a completely different order. Nevertheless, as is clear from the developed image, the Reims labyrinth also exhibits overall $180^{\circ}$ rotational symmetry. Labyrinth image drawn by Jacques Cellier in Françoys Merlin, Recherche de plusieurs singularités, 1587. Bibliothèque Nationale de France; manuscript available through Gallica, f77recto.

The labyrinth in Sens cathedral is the oldest of the three: the construction of the cathedral ended around 1180. The labyrinth was destroyed in 1768. This 1828 drawing signed C. Belloc, from the website of the Communauté des Communes du Sénonais, shows that the Sens labyrinth was topologically different both from Chartres and from Reims (the segments are the same as Chartres but the switching pattern is not). The developed image shows that this labyrinth too had the overall $180^{\circ}$ "hidden" rotational symmetry. Credit: Carte postale, CEREP-Société archéologique de Sens.

The commonly accepted idea of how the Sens labyrinth was organized is not the same as this one. Kern, Matthews, and most labyrinth websites give a different plan, which does not have the hidden symmetry. One place where it is reported (presumably) correctly is Jacques Hébert's The Medieval Labyrinth. Hébert employs a different criterion, based on what he calls "rhythmical structure," which seems to be equivalent: the eight "canonical labyrinths" he illustrates (of which our three are the only historical examples) exhibit overall $180^{\circ}$ hidden rotational symmetry.