Later on, mathematicians took up the much more difficult question, can we find a formula for $r_{k}(n)$, the number of ways to express $n$ as a sum of $k$ integral squares? This last question led to some of the most sophisticated mathematics of the 20th century, as did a common generalization of all these questions....

These problems were alluded to by the mathematician Diophantus in Hellenistic times, and were answered by the French mathematician Pierre Fermat in the seventeenth century. They have been reexamined, along with related questions, by several generations of mathematicians right up to the present. Fermat also had answers to some related questions such as, in how many ways can $n$ be expressed in the integral forms $a^2 +2b^2$ or $a^2 + 3b^2$? Later on, mathematicians took up the much more difficult question, can we find a formula for $r_{k}(n)$, the number of ways to express $n$ as a sum of $k$ integral squares? This last question led to some of the most sophisticated mathematics of the 20th century, as did a common generalization of all these questions. Given a homogeneous algebraic expression $f(x)$, of degree two in $r$ variables with integral coefficients, that always takes non-negative values, can we find a formula for the number of integral solutions of $f(x_{{}_{1}}, \dots, x_{{}_{r}}) = n$ for arbitrary $n > 0$?

The original questions about $r_{{}_{2}}(n)$ are more elementary than the others. There is nothing new to say about them, but for a while each generation had a new and interesting understanding of the answers, generally by placing them in a larger context. Some of these techniques apply also to the other questions, and I am going to try to explain them by seeing what they say about $r_{{}_{2}}(n)$.

The function $r_{{}_{2}}(n)$ may be interpreted geometrically. How many points of the plane with integral coordinates are contained in the band between circles of radii $\sqrt{n\pm 1/2}$ ? One advantage of this interpretation is that it makes it apparent that the complication of the problem is due in some sense to the mutual incompatibility of circles and squares. (Think of all those proverbial square pegs $\dots$ ) It does not, however, suggest how to solve the problem. 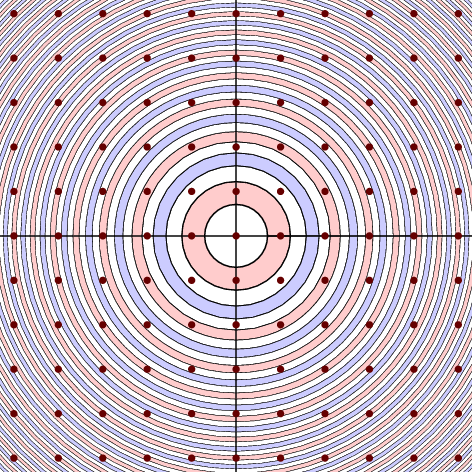 The pattern in this graph is not at all clear, but once a basic principle is perceived, things become clearer. This basic principle is that the function $r_{{}_{2}}(n)$ is related to the multiplicative structure of $n$. More precisely:

Thus $3\cdot 7 = 21 \equiv 1 \; (4)$ but even so it cannot be the sum of two squares. A very strong version of this assertion in fact answers the first question at the beginning:

This will be explained in the next few sections.

It is possible to give elementary arguments to prove this Theorem, but it is better to apply some advanced technology. This should make the nature of the problem, and in particular possible generalizations, more transparent. Besides, as every carpenter will tell you, solving problems is much easier if you have exactly the right tools at hand.

The Gaussian integers may be identified with lattice points in the plane, as in this figure 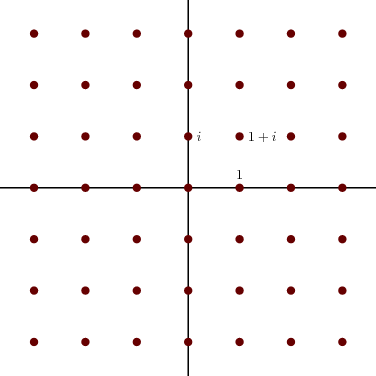 As Wikipedia says (but alas! doesn't demonstrate) this can be proved graphically, using the geometric interpretation of complex multiplication in terms of rotation.

To familiarize you with the basic idea of the argument, I first use a picture to describe a weak form of the division process for the usual integers: for integers $n$ and $m$ there exist $q$ and $r$ with $|r| < |m|$ such that $n = qm + r$. In a diagram:

The diagram suggests also that our usual conventions are somewhat arbitrary$-$one might equally well write $37 = 4\cdot 8 + 5$ or $37 =5\cdot 8 - 3$. This non-uniqueness also occurs with Gaussian integers, but is again of little importance.

The idea for Gaussian integers is not so different. First I plot all the multiples of $m$. Multiplication by $m$ stretches and rotates, so we get the figure below 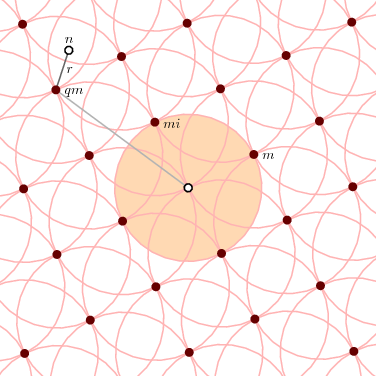 It should be apparent from the picture that there are a number of choices for $q$ and $r$, some better than others. But as I have already said, that will not be important.

The main consequence of the division algorithm is a variant of prime factorization. Define a unit Gaussian integer to be one whose inverse is also a Gaussian integer. Because lengths are multiplicative, this means that a unit must have length $1$. Therefore the only units are $\pm 1$, $\pm i$.

The argument that demonstrates this is formally the same as it is for ordinary integers, given the division algorithm. It progresses through a series of Lemmas: (a) The greatest common divisor of two Gaussian integers is well defined; (b) one can apply a Euclidean algorithm to show that $$ {\rm gcd}(a, b) = ka + \ell b \, ; $$ (c) if ${\rm gcd}(a, m) = 1$ and $m | ab$ then $m | b$. One consequence:

The factorization is not all that useful unless we know what the Gaussian primes are. They are all listed here (up to unit factors):

Back to sums of squares

Of course, the first statement is hardly deep. But as we shall see, it fits in well with the conditions on prime factors of $n$.

More about these formulas

At first one's impression is that the multiplicative structure of the function $r_{{}_{2}}(n)$ is relevant only to the very special problem of understanding sums of squares, or near relatives. The reasoning that led to its verification depends strongly on unique factorization in the Gaussian integers, certainly. Similar reasoning applies almost without modification to a few other simple problems, for example, the analogous questions involving $x^{2} + 2y^{2}$ and $x^{2} + xy + y^{2}$. Similar techniques even apply to $x^{2} + y^2 + z^2 + w^2$, for which one applies a theory of quaternion integers $a + bi + cj + dk$ (I mean the quaternions defined by the Irish physicist Hamilton). But there was a thread started by the German mathematician Eisenstein, continued most significantly by Hermann Minkowski and Carl Ludwig Siegel, that showed how a multiplicative structure arose when answering this extremely general question: Suppose $$ Q(x) = a_{{}_{1,1}} x_{{}_{1}}^{2} + \cdots + a_{i,j} x_{{}_{i}}x_{{}_{j}} + \cdots a_{r,r}x_{{}_{r}}^{2} $$ to be any algebraic function homogeneous of degree $2$$-$called a quadratic form$-$ with integral coefficients. Can one find a formula for the number of integral solutions $(x_{i})$ of the equation $Q(x) = n$ as a function of $n$? The simplest and perhaps most attractive examples would be the sums of squares $$ x_{{}_{1}}^{2} + \cdots + x_{{}_{r}}^{2} $$ on which many mathematicians throughout the nineteenth and early twentieth century, including the Indian mathematician Ramanujan, worked. What might be considered the definitive answer was found by Carl Ludwig Siegel. It has a few subtle properties, and involves some new ideas. On the one hand, it asserts that in some sense one cannot expect a simple formula for $r_{Q}(n)$, and on the other at the same time it explains fairly precisely why not. At least, it does give a product formula of some kind.

If $M > 0$ is any integer, one may consider the expression $Q(x)$ with coefficients reduced modulo $M$. One can define in an essentially natural way what it means for two quadratic forms to be equivalent as integral expressions, and one can also define equivalence modulo $M$. In some cases, for example $Q = x^2 + y^2$, it turns out that the two notions are the same$-$if $Q$ is any form $Ax^2 + Bxy + Cy^2$ that is equivalent to $x^2 +y^2$ modulo every $M$, then $Q$ and $x^2 + y^2$ are integrally equivalent. Two forms are said to be in the same class if they are integrally equivalent, and in the same genus if equivalent modulo all $M$. Siegel's formula gives a product expression for a kind of average of $r_{{}_{Q}}(n)$ as $Q$ varies over a set of representatives of the forms in the same genus of $Q$, which is finite.

The divisor formula was first found by the nineteenth century German mathematician Jacobi. It, too, has a subsequent history. I won't give details, but just say that it leads, not to an exact formula for $r_{_{\Bbb Z}}(Q, n)$ but to an asymptotic formula that gives a good approximation for large $n$. The error in this asymptotic approximation has been of great interest$-$that for $r_{24}(n)$, for example, has an error term involving the famous numbers $\tau(n)$ of Ramanujan, and its magnitude was the motivation for much mathematics in the twentieth century.