Circles and Squares ... and Primes

In this column I am going to try to give you some idea of how this [finding patterns in the primes] works by looking at a few relatively simple examples. ...

A prime number is a positive integer $p$ that is divisible only by $\pm p$ and $\pm 1$. Now multiplication and addition interact rather strangely, in almost unfathomable ways. As a consequence, the distribution of prime numbers among the integers is somewhat random, and mathematicians have tried to find patterns in this distribution for a very long time. The starting point is a fact that the Greeks of classical times already knew: there are an infinite number of primes. Euclid (c. 300 BCE!) includes a proof of this (it is Proposition 20) in Book IX of the Elements.

Even now, there remain many puzzles concerning primes about whose solutions we seem to know next to nothing.

Surprisingly, even though prime numbers are very discrete objects, some of the major tools in investigating them have been certain continuous functions, and in particular the zeta function $\zeta(s)$ first introduced around 1750 by the Swiss mathematician Leonhard Euler. It is probably the most famous function in all of mathematics, at least among mathematicians, but undoubtedly more mysterious than not to the rest of the world.

The zeta function is just one of several similar functions, all of which have some application to problems in number theory. The point is that finding interesting patterns in the small-scale distribution of prime numbers is very difficult, perhaps impossible, but that patterns do appear when one looks at large collections of them, just as irregularities in any structure disappear when perceived from a great distance.

In this column I am going to try to give you some idea of how this works by looking at a few relatively simple examples. The full theory of $\zeta(s)$ involves some extremely difficult mathematics, but it is possible to give some idea of what is going on just through elementary calculus.

I'll look first at some problems about the distribution of the usual prime numbers $2$, $3$, $5$, $7$ ... , but in the second part of this column I'll look briefly at a less familiar problem concerning prime "numbers" among the Gaussian integers.

Just as with all infinite series, one has to begin by asking, for what values of $s$ does this series make sense? The terms are all positive, so we only need to know if the sum is bounded. The answer comes from the integral test often encountered in first year calculus courses. We can visualize the series by plotting $1/x^{s}$ for some sample values of $s$, in the range $x=1$ to $\infty$. Here, for example, is what we get for $s=2$:

It was Dirichlet (c. 1830) who applied the same reasoning to deduce that there are an infinite number of primes in any arithmetic progression not automatically ruled out (such as the even integers). For example:

As Dirichlet himself remarked, one has to be a bit careful about the way in which conditionally convergent series are manipulated, but it is not hard to be suitably careful here. (Dirichlet was one of the very first mathematicians to be so careful about convergence, and it is not unreasonable to claim he was one of the founders of modern mathematical style, along with Galois and Cauchy.)

Dirichlet's Theorem is well known, and it is easy to find a very large number of places where its most general form, valid for a much larger class of arithmetic sequences, is explained. But I shall not say more about it. Instead, I want to discuss a different kind of prime number, and a different kind of distribution.

The Gaussian integers are the complex numbers of the form $a + bi$ with $a$, $b$ both integers (here $i = \sqrt{-1}$). There are many new phenomena that appear when working with these. Most appealing is the prospect of interpreting them geometrically. They may be considered as a lattice of points in the complex number plane. 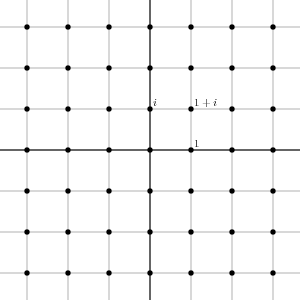 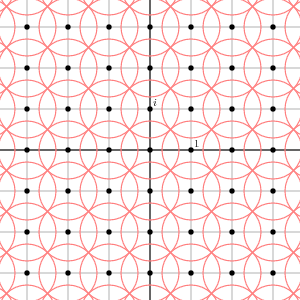 It is not hard to write this recipe out explicitly, although it does require a little care. In any case, one may now apply the usual Euclidean algorithm to calculate greatest common divisors. Suppose $n \hbox{ mod } m$ to be the remainder in the division algorithm for ${\Bbb Z}[i]$. To find the gcd of two Gaussian integers:

As a consequence of the division algorithm, a version of unique factorization is valid for ${\Bbb Z}[i]$. One thing that is new here is that to make factorization unique, one needs to decide what a positive complex number is. What I'll specify is that it must be in the positive quadrant: $x + iy$ will be positive if $x > 0$ and $y \ge 0$. 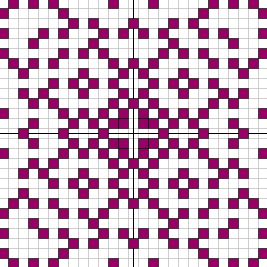 The angular distribution of Gaussian primes

And here is a picture of a lot of Gaussian primes: 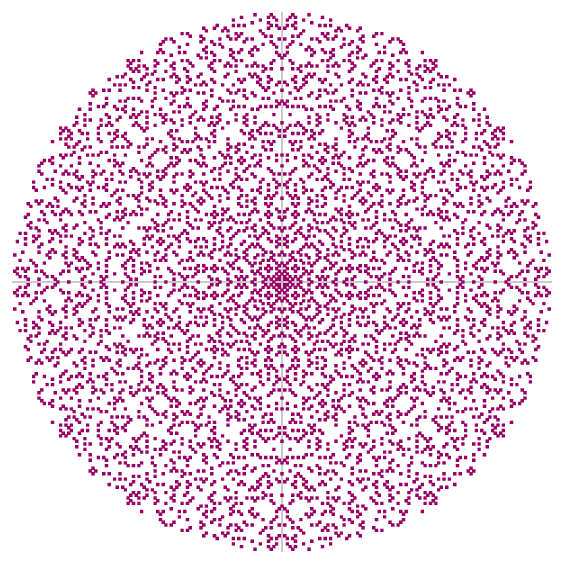 The potential chaos in the distribution of Gaussian primes is very evident, even more evident than graphics can demonstrate for the primes in ${\Bbb Z}$. One analogue of Dirichlet's Theorem, at least, seems very natural:

Theorem. In any angular sector there exist an infinite number of Gaussian primes.

In fact, the Gaussian primes are uniformly distributed in angle.

The functions $\zeta(s)$, $L(s)$, etc. are collectively known as $L$-functions. There are lots of others that are somewhat similar. Their most important property is the expression as an Euler product, which guarantees that one can deduce properties of prime numbers of some kind or another from analytic properties of the functions.

Riemann (c. 1850) pointed out that $\zeta(s)$ can be defined for $s$ a complex number, and that extremely strong estimates of the distribution of prime numbers can be derived from conjectural properties of its complex zeros. This conjecture has become the most famous unproven conjecture in all of mathematics.