In this column, we will consider classes of permutations that appear in various contexts and seek a means of describing the permutations in these classes. ...

Permutations appear so commonly in mathematics that even elementary students are familiar with them. In this column, we will look at some classes of permutations and see how they may be described using the language of patterns in permutations.

In this column, we will consider classes of permutations that appear in various contexts and seek a means of describing the permutations in these classes. Let's begin with a classical problem introduced by Knuth before considering a more recent problem in computational biology.

Sorting with a stack

We begin by looking at how a stack, a simple but powerful data structure frequently used in computing, may be used for sorting. For example, we will input a permutation of the integers $1,2,3,\ldots, n$, such as 3124, and seek a process that sorts the integers into the increasing sequence 1234.

A stack may be schematically represented as shown below.

At the beginning of the sorting process, we have the input on the right.

Individual numbers are transferred from the input to the output with the stack acting as a way station. There are only two allowed operations.

The following rules define an algorithm that attempts to sort the input into a string of increasing integers.

The following steps result from applying this algorithm to the input string 3124:

This example shows that our stack-sorting algorithm is capable of sorting the permutation 3124. Can every permutation be sorted in this way? An example with input 231 shows that the answer is no. 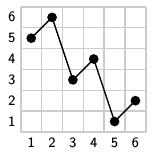 It is now visually clear that the pattern 312 is realized by the subsequence 534.

For instance, suppose $\sigma$ is a permutation containing the pattern 231. This means that we have $i\lt j\lt k$ appearing in the permutation as 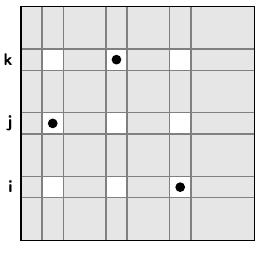 Of course, there may be more than one appearance of the 231 pattern so let's choose one such that the distance between the appearances of j and k is as small as possible. Looking at the graph of the permutation, this means there are no elements in the red shaded region. 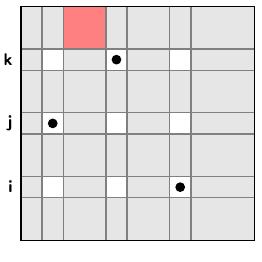 By the time that k appears on the right of the input string, j has already gone onto the stack. If it is still there, then any elements above j are smaller than k. Therefore, we will perform a sequence of pop operations until j is popped.

In fact, we can say more. Suppose that a permuation is not sortable, meaning there is a pair i $\lt$ j such that j appears in the output string before i. This means that j is popped off the stack before i by some element k, which appears between j and i in the input.

A permutation is stack-sortable if and only if it contains no appearance of the 231 pattern.

How many stack-sortable permutations are there?

Now that we have a criterion that tells us which permutations are stack-sortable, it's easy to count the number of these permutations.

So far, we have been looking at the set of stack-sortable permutations and have found they are characterized by the absence of the pattern 231. As this is a typical phenomenon, we will introduce some terminology to help our discussions.

A problem in computational biology

Now that complete genome sequences are readily available, it is possible to compare two genomes and ask how far apart they are under various rearrangement strategies. Evolutionary biologists have identified a particular model of genome rearrangement, known as tandem duplication-random loss, that explains many observed rearrangements in mitochondrial genomes. As we will see following Chaudhuri et al and Bouvel and Pergola, this model of rearrangement leads to a permutation class whose basis may be easily identified.

A rearrangement of a genome may be modeled by a permutation. We begin by labeling the genes in a sequence by 1, 2, 3, $\ldots$, n. 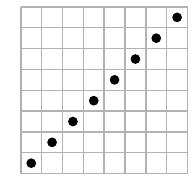 In the first phase of the rearrangment, this sequence of genes is duplicated to obtain a sequence twice as long as the original. 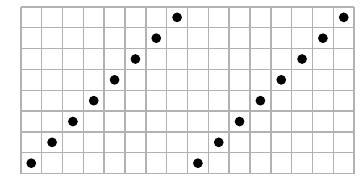 Notice that each gene now appears twice. In the second phase of the rearrangement, one copy of each gene is randomly selected for removal, 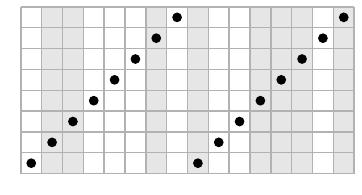 which leads to the final rearrangement. 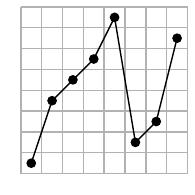 Suppose now that we perform a second duplication-loss rearrangement. After duplicating, we have three descents: the original descent is duplicated, and a third is introduced. 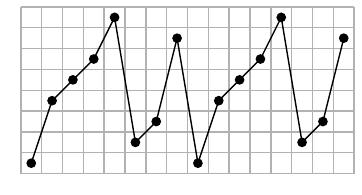 After removing one randomly selected copy of each gene, we arrive at the final permutation, which again has three descents. 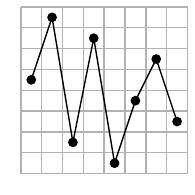 Of course, it is possible that a descent is removed in the loss phase of the rearrangement, but we see that there can be no more than three descents.

In the same way, we see that, after $p$ duplication-loss rearrangements, there may be no more than $d=2^p-1$ descents. In fact, Chaudhuri et al showed that this property characterizes ${\cal C}_p$.

It is straightforward to see that the basis ${\cal B}_d$ is finite: as seen below, a permutation having two adjacent ascents cannot be minimal since removing the circled element produces a subsequence having the same number of descents. 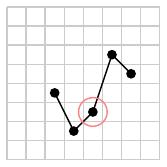 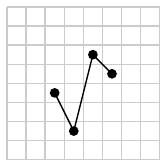 In the same way, a minimal permutation cannot begin or end with an ascent. Therefore, the number of ascents $a$ must be less than the number of descents $d$; that is, $a\leq d-1$.

If the length of the permutation is $n$, then $a + d = n-1$, which means that a minimal permutation has $n\leq 2d$. The shortest permutation having $d$ descents is an inversion of length $d+1$ while alternating permutations have the longest possible length $2d$. 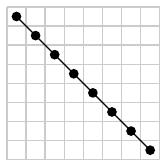 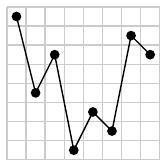 We now define a more refined type of pattern, known as a vincular pattern. We say that $\pi\prec\sigma$ is a vincular pattern if the subsequence in $\sigma$ that forms $\pi$ consists of adjacent numbers. This is denoted by underlining the numbers in $\pi$.

Since the permutations in ${\cal B}_d$ are minimal, the following vincular patterns cannot appear since the circled number may be removed without lowering the number of descents. 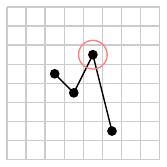 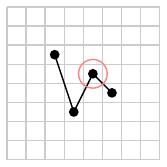 In fact, the only forms in which ascents may occur are as shown below: 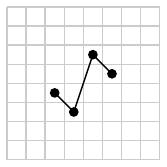 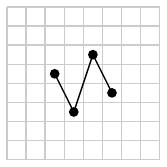 Therefore, ascents in permutations in ${\cal B}_d$ manifest as appearances of vincular patterns $\underline{2143}$ and $\underline{3142}$.

This gives the following characterization of permutations in the basis ${\cal B}_d$:

The Catalan numbers make another appearance: Bouvel and Pergola show that the number of minimal permutations having $d$ descents and length $2d$ is the Catalan number $C_d$.

The use of patterns to describe permutation classes is currently a growing area. In "A Singular Mathematical Promenade," Ghys describes a recent result of Kontsevich concerning "polynomial interchanges."

For instance, the polynomials shown below define the permutation 213. 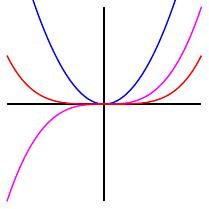 Kontsevich showed that the class of permutations that arise in this way avoid the patterns 2413 and 3142.

Kitaev's book serves to systematize vocabulary and notation in addition to demonstrating a wealth of areas in which these ideas appear from theoretical computer science and discrete mathematics to algebraic geometry and theoretical physics.