How to Differentiate with a Computer

Automatic differentiation has been used for at least 40 years and then rediscovered and applied in various forms since. It seems, however, to not be as well known as perhaps it should be. ...

Though it can seem surprising and even mysterious, we're all aware that mathematical ideas, which spring from our human imagination, can help us solve problems we see in the world around us. What is recognized less frequently is that it can be challenging putting a mathematical idea to work effectively.

Suppose now that we would like to automate this process by creating a program that efficiently implements Newton's method for a function $f$ supplied by a user. Our program needs to compute values for both the function $f$ and its derivative $f'$ at the points $x_n$.

We have some options for computing the derivative $f'$. First, we could ask a computer algebra system, such as Mathematica, Matlab, or Sage, to compute the derivative $f'$ symbolically and then evaluate $f'$ at the points $x_n$. There are, however, a couple of disadvantages to this approach. First, finding the derivative symbolically, and then evaluating the resulting expression, can be computationally expensive. This is especially true if we have an application requiring a higher derivative. Second, we need to be able to write a symbolic expression for the function. If the function values appear as the result of a computational algorithm, it may be difficult or even impossible to express $f$ symbolically.

A second approach is to estimate the derivative numerically using, say, a central difference $$ f'(x_j) \approx \frac{f(x_j+h)-f(x_j-h)}{2h} $$ for a small value of $h$. Of course, this approach only produces an approximation to the derivative, and this particular approximation is plagued by numerical instability. For instance, if $f(x)=e^x$ and we approximate $f'(0)=1$ using the central difference, we find:

What we would prefer is a technique that evaluates the derivative at a point in the same amount of time and with the same accuracy with which we evaluate the function at a point. The subject of this column, known as automatic or algorithmic differentiation, provides just such a technique.

Dual numbers and the forward mode of differentiation

To automate the computation of derivatives, we define the dual numbers as the set of numbers $a+b\epsilon$ where $a$ and $b$ are real numbers along with the requirement that $\epsilon^2 = 0$. These numbers seem naturally related to differentiation if we think, as the notation suggests, of $\epsilon$ as an extremely small, but positive, quantity whose square is so small that it can be safely ignored. This formalism allows us to consider small linear changes while ignoring quadratic and higher-order side effects.

Many familiar properties of derivatives are compatible with this definition.

Suppose we are finding the solutions of an equation $f(x)=0$ using Newton's method; we therefore need to evaluate both $f(a)$ and $f'(a)$ at a collection of points. Using dual numbers, we find both quantities with roughly twice as much work as needed to evaluate $f(a)$ alone. If we had used symbolic differentiation instead, we would have invested the effort to find $f'(x) = \sin(x^2) + 2x^2\cos(x^2)$ and then still needed to evaluate $f'(3)$. Dual numbers provide the same result with the same accuracy while bypassing the symbolic computation of $f'(x)$.

Even better, it is easy to implement this technique in many object-oriented programming languages using operator overloading. We first define a data type that models dual numbers and then extend the definition of simple operators such as +, *, sin, exp, log and so forth to accept dual numbers. Since any function can be written by combining these operators, it is then possible to write simple code, such as

Because this process proceeds through the function graph in the same order as which we evaluate the function, we call this the forward mode of automatic differentation. We will later meet the reverse mode. 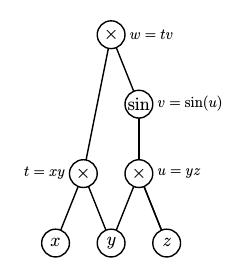 As before, this is also easily implemented in many of your favorite programming languages through operator overloading. If $f$ is a function of $n$ variables, the amount of computation required here is about $n+1$ times the amount required to simply evaluate the function.

The reverse mode of automatic differentiation

Earlier, we demonstrated how to find the gradient of a multivariable function using the forward mode of automatic differentiation. If there are $n$ variables, then the amount of computation is roughly $n+1$ times the amount of work required to evaluate the function itself. The reverse mode of automatic differentiation provides a more efficient way to find the partial derivatives.

This has been a very brief introduction to the theory of automatic differentiation. In particular, we have not touched on many of the issues related to the implementation of these ideas in a computing environment. This is quite an active area of investigation, which may be explored in the references given below.

We have also not described the many and varied applications of automatic differentiation, though it shouldn't be surprising that a technique for computing derivatives efficiently and with accuracy would be exceptionally useful. Uses include optimization, gradient descent, and sensitivity analysis. Indeed, Nick Trefethen includes automatic differentiation in his list of 29 great numerical algorithms.

Mathematicians justifiably describe their discipline as providing theoretical tools for solving important real-world problems. The gap between the theory and its uses, however, is not always slight. This article hopes to illuminate an example of what is required to bridge this gap.