His investigation of Earth's motion amounted to a serious and important digression from his main path, upon which all of his subsequent work depended. This essay will be concerned with that digression. ...

This is the second in what I intend to be a series of columns in which I try to illuminate at least parts of Johannes Kepler's derivation of his famous laws of planetary motion (see the first column).

At the very start of his analysis of the motion of Mars in its orbit, Kepler made two departures from contemporary practice. At that time, most if not all astronomers followed closely modifications of techniques going back to the Greek astronomers Hipparchus (c. 150 B.C.E.) and Claudius Ptolemy (c. 150 C.E.). The "revolution" brought about by Copernicus was not a revolution in mathematical technique. First of all, whereas for Copernicus and Tycho Brahe the center of the proper solar system was the center of Earth's orbit (what was called the "mean Sun"), Kepler proposed that it should be taken to be the real, physical Sun. Second, Copernicus and Tycho used a lopsided circle first introduced by Hipparchus and used ever since to describe the motion of the Earth around the Sun (or, for Tycho, vice-versa), but somewhat more sophisticated constructions to deal with the other planets. Kepler proposed that the Earth should be dealt with just as the others. In retrospect, it is very hard for us to see why Kepler's proposals had to wait for Kepler to bring them forward, but then history often proceeds rather blindly in a kind of random walk.

The second of these was taken up by Kepler after his earliest work with Mars, in the course of which he came across a clear contradiction in sticking with Hipparchus' construction. His investigation of Earth's motion amounted to a serious and important digression from his main path, upon which all of his subsequent work depended. This essay will be concerned with that digression.

In order to understand Kepler's modification, it is necessary to look at what he inherited from his predecessors. I'll do that in a moment, but I think it will help if I first recall Kepler's Laws, and say something as well about how they are used.

Kepler's First and Second Laws are directly relevant to the two technical issue raised above:

To understand the First Law, I recall briefly in one figure the geometry of an ellipse: 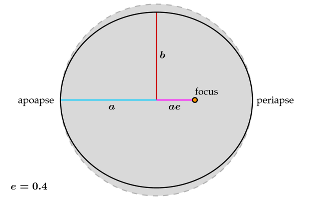 There are other parameters that determine how the ellipse is embedded in three dimensions. To a close approximation the orbits of all the planets in the solar system lie in a single plane, and I'll not be concerned here with deviations from this. But it will be important how an orbit is oriented in this plane--which is to say, where its perihelion is located. This is because the relative placement of the orbits of Earth and Mars will be important.

The Second Law can be illustrated: 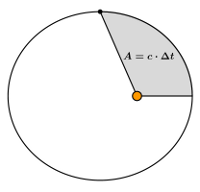 One consequence of the Second Law is that the ratio of the planet's speed at perihelion to that at aphelion is $(1 + e)/(1 - e)$. 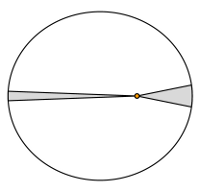 How can we find the planet's location at any given time? An answer is offered by Kepler's Second Law, but is not as simple as one might desire, and indeed the answer is just complicated enough that it caused a lot of astronomers in the generation just after Kepler to find the Second Law somewhat repulsive. They sought (in vain) a simpler answer that would be valid in all cases, although as we shall see some did devise a good approximation if $e$ was small. It was not until Newton introduced the notion of angular momentum and showed that the Second Law was a consequence of its conservation that it was universally adopted.

The geometry of this recipe is illustrated in these two figures: 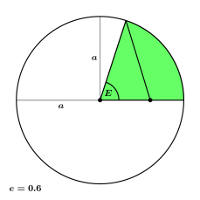 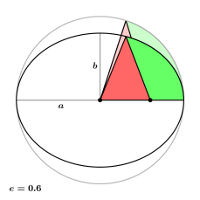 Lagrange's formula is derived in the calculus text by Benjamin Williamson mentioned in the references below.

The Greek astronomer Claudius Ptolemy devised different mechanisms to track the paths of planets in the sky, but it should not be too surprising that his methods are closely related to Kepler's. In effect, he introduced two candidates for orbital motion that approximate Kepler's.

Both of his models of planetary motion start with the basic idea that the planet's orbit is a circle. As we have seen, this is not an unreasonable estimate. If $a$ is the semi-major axis of an orbit then the complementary axis $b$ has length $b = a\sqrt{1 - e^{2}}$. The eccentricity $e$ of every planet except Mercury is rather small, and $\sqrt{1 - e^{2}}$ is approximately $1 - e^{2}/2$, which is very close to $1$. So the orbit is practically indistinguishable from a circle.

The more interesting of the two models is that justified by the following, in which "empty focus" refers to the focus of the ellipse that is not the Sun: 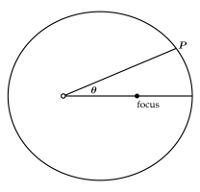 in which $E$ is the angle appearing in Kepler's equation.

What suggests is that we can approximate the true motion by specifying that the planet move in a circular orbit, and that its angular velocity around the empty focus be constant. In standard terminology, the empty focus becomes the equant of the orbit. 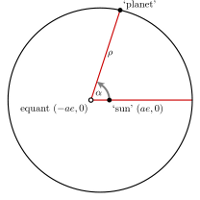 This type of motion is remarkably close to Kepler's, as long as $e$ is small--within four-tenths of a percent of the true value for $e$ equal to the eccentricity of Mars' orbit, and at most a few hundredths of a percent for Earth's.

The other model, the eccenter model, is much simpler. In this model, the planet's path is a circle, and the planet rotates in this circle at a uniform rate. The Sun lies close to, but not at its center. Instead, it lies at a small distance away from the center, proportionally equal to $2e$ if $e$ is Kepler's eccentricity of the orbit. 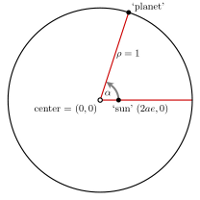 What is very odd about this model is that it tracks angles extraordinarily well, but is hopelessly off on distances. For example, for Earth's orbit its values for angles read off from the focus is accurate to within a few hundredths of a degree.

The role of this model in classical astronomy is rather curious. First of all, it is exactly what Ptolemy used to track what was for him the path of the Sun in the course of a year. More curious is that Copernicus used the same technique to track Earth in its orbit around the Sun. The reason this is so curious is that he used a modification of the equant model for all the other planets, but apparently felt constrained by tradition regarding the Earth. Thus his reputation as having made the Earth into just another planet, for which contemporaries condemned him strongly, was not deserved on the basis of his technical treatment.

Also extremely curious is that Kepler, who was the first to take seriously Copernicus' democracy of planets, initially used the same model for Earth's motion, although he changed to an equant model after this led him into trouble. This shift was in fact a major step in his path towards his laws.

Why did he make the shift? It was precisely because the eccenter model was wildly inaccurate in distances. As long as only the Sun and the Earth were involved, the problem did not occur, because only angles could be perceived. But when observing Mars from Earth distances did come into play.

Up until the technological and scientific advances of the twentieth century, the only way to measure distance in the solar system was through parallax--by looking at an object in the same position from two separated points. After all, this is precisely how human beings perceive distance, by merging in some way what our left and right eyes perceive.

We cannot make widely separated observations of Mars from Earth at the same moment, but by making observations spaced apart in time by some multiple of Mars's period (which happens to be $687$ days), we can know that Mars is actually in the same place each time. We can, and Kepler did, use this idea to decide whether Earth followed the equant or eccenter models.

Following a suggestion of Hugh Thurston, I'll look only at a very simple case. Suppose we make three observations, with Earth in very particular positions. Assume that the direction of Mars is perpendicular to the axis of Earth's orbit, that two of the observations are made while Earth is at perihelion and aphelion, and that the third is at a moment half-way in between. Under the eccenter hypothesis, the situation is like this (eccentricity exaggerated): 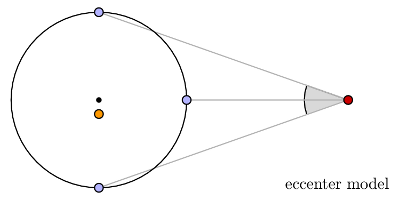 But under the equant hypothesis: 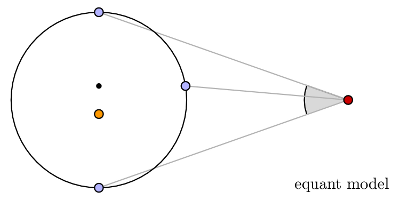 The alternatives can be distinguished by a comparison of angles. (as one author comments, Kepler was in effect looking at Earth from Mars.) The circumstances are rare enough that no observations of Tycho Brahe's were exactly suitable, but Kepler explored many that were close, and verified that in all of them, modulo reasonable inaccuracy in observations, the equant hypothesis was the only possibility compatible with them.

He then returned to trying to track the motion of Mars.

In view of the great accuracy of the equant model for all planets except Mercury, which was impractical for Kepler to work with because of the difficulty of observation, it seems a miracle that he was eventually able to separate the true orbit from a circle.