On, December 6, 2022, the AMS website will be down for maintenance beginning at 5 p.m. EST. We expect the site to be down for several hours.

Puppies, Kittens, and the Golden Ratio

We're going to look at Wythoff's Nim, a variation of the more familiar game of Nim and a game that can easily be played with children...


Now that the dog days of summer are here, it seems like a good time to play a game, especially one that reveals a rich mathematical structure. We're going to look at Wythoff's Nim, a variation of the more familiar game of Nim and a game that can easily be played with children. In fact, Wythoff's Nim is often played at math circles under the name "Puppies and Kittens."

Here's how to play: imagine you have two boxes, one of which has a number of puppies and the other a number of kittens. 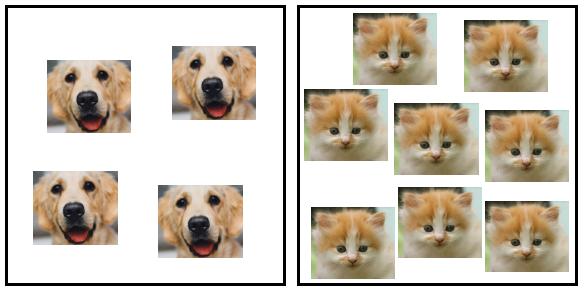 Two players alternate turns in which they take some number of puppies or kittens to a good home so long as one of the following conditions is met.

The winner is the player who removes the last pet. 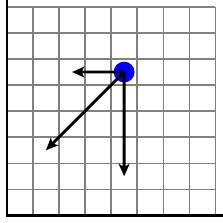 Thinking visually, we find an equivalent version of the game that Martin Gardner called "Corner the Lady." Imagine an infinite chessboard occupying, say, the first quadrant of the plane. The players take turns moving a queen, which starts out at some location, in the usual horizontal, vertical, and diagonal directions so long as she moves toward the origin. The winner of the game is the one who moves the queen to the origin. 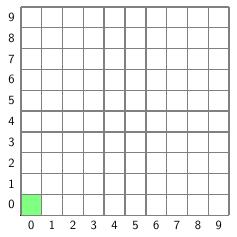 Our goal is to determine and characterize the positions on the board that guarantee a win if we move to one of them. The first position is simple: if we can move to the origin $(0,0)$, we win. 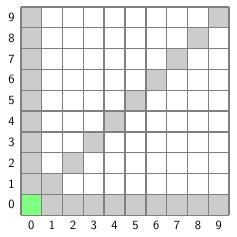 But now we can also see more: if we move to a position that allows our opponent to move to $(0,0)$, then we lose. Therefore, the shaded gray squares are losing positions. 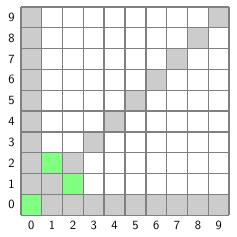 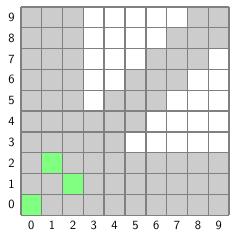 Our new winning positions produce a new set of losing positions; for instance, if we move to a position that allows our opponent to move to $(1,2)$ or $(2,1)$, then we will lose. 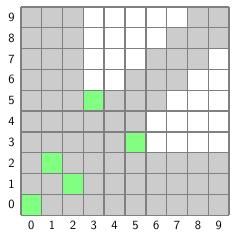 which leads to a new set of losing positions and so on.

Notice that the smallest positive integer not in $C$ is 4, which tells us that the fourth column has no winning entries. Therefore, $x_3 = 4$. 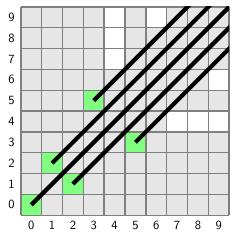 This demonstrates how we can construct all the winning positions inductively: 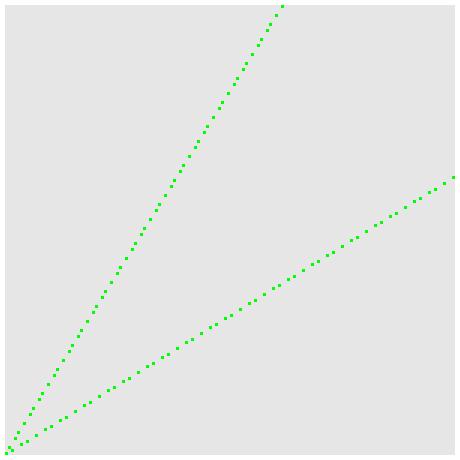 Notice first that $X$ and $Y$ are disjoint since any common integer would label a column having two winning positions due to the symmetry of the game. Second, the recursive construction shows that their union is the set of positive integers. In other words, $X$ and $Y$ form a partition of the positive integers.

The Beatty sequences of two irrationals $\alpha$ and $\beta$ partition the positive integers if and only if $$ \frac1\alpha + \frac1\beta = 1. $$

The literature on Wythoff's Nim is quite extensive. In his original 1907 paper on the subject, Wythoff claims that he pulled $x_n = \floor{n\phi}$ "out of the hat." A proof appears in Coxeter's 1953 paper.

I am grateful to Paul Zeitz for introducing me to this game.