You're in for a Shock

One moment we're driving at a reasonable speed with low density when we notice that the traffic ahead of us is very dense and moving slowly. We need to quickly slow down and get in the line of slowly moving cars. We have then passed through the shock wave. ...

It was my fault. I had put off packing and ended up leaving for the airport later than planned, which meant driving on the interstate through downtown at rush hour. Being in a state whose governor was elected on a promise to #fixthedamnroads, construction soon reduced traffic to a single lane, and I was stuck in a line of cars alternating between stopped and slowly crawling.

I began to wonder about this. If there was a single line of cars for several miles, couldn't we move together at the same constant speed through the bottleneck? Why did we all spend long periods of time motionless? Surely, mathematics has something to say.

I knew that traffic flow was typically studied using a partial differential equation, but when I looked into it later, I was surprised to find a simple and elegant geometric interpretation first described by Paul Richards in 1956. We'll investigate Richards' work here, beginning with a simple conservation law that leads to a partial differential equation. Then we'll see how solutions to this equation may be understood geometrically.

Considerable effort has gone into studying traffic flow using a number of models that focus on various features of the problem. Here, we will consider a relatively simple situation in which traffic flows in a single lane on a long, straight highway with no entrances or exits.

We will describe the density of cars on the road at a given position $x$ and time $t$ using the function $\rho(x,t)$, which is expressed in cars per unit length of road. In particular, consider the short stretch of road shaded below. If the length of road is $\Delta x$, then the number of cars in this interval is $\rho(x,t)\Delta x$.

We obtain a useful description of the density function $\rho(x,t)$ if we consider the number $N$ of cars in an interval $[a,b]$.

It is reasonable to expect that the velocity $v$ will depend on the density $d$. When $d$ is close to $0$, for instance, there are almost no cars on the road so we will be traveling at a maximum speed, which we denote by $c$. We expect that our speed $v$ decreases as the traffic becomes more dense. In the case $d=1$, the traffic is bumper to bumper so our velocity will be zero. A simple model that satisfies these properties is $$ v = c(1-d). $$

While this may seem like an overly simplistic assumption, Lighthill and Whitham describe experimental evidence that justifies its use.

Given an initial distribution of cars, described by an initial density function $d(x,0)$, as shown below, we would like to describe the evolution of the density $d(x,t)$ for later times. Notice that we seek to describe the density, an aggregated measure of all the cars' positions, rather than the movement of individual cars.

The approach we take is formally called the method of characteristics. Suppose we begin at a point $x_0$ whose density is initially $d_0$; that is, $d_0= d(x_0,0)$.

There are a couple of things to notice here.

Putting this together, we can see that the density wave evolves as seen below.

This leads to what Richards calls the shear rule: given an initial density $d(x,0)$, the density $d(x,t)$ at a later time is obtained by performing a shear on the $(x,d)$ plane, as seen below. 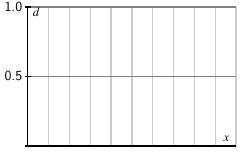 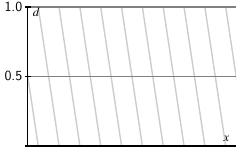 For example, consider a traffic light as it turns from red to green. Initially, the density is 1 behind the light, as the traffic is stopped, and 0 in front of the light since no traffic is moving through the light. The following animation shows how the shear rule applies to show the density evolving once the light turns green.

The shear rule provides an elegant description of how the density evolves in time. However, it only tells part of the story.

Imagine, for instance, that the initial density is an increasing function.

As before, we determine the density at later times using the shear rule:

In actuality, this introduces a discontinuity, called a shock wave, in the density as seen here.

Anyone who's driven on a highway is familiar with this situation. One moment we're driving at a reasonable speed with low density when we notice that the traffic ahead of us is very dense and moving slowly. We need to quickly slow down and get in the line of slowly moving cars. We have then passed through the shock wave.

It's not hard to see that this condition determines the speed with which the shock wave moves. Suppose that $d_1$ and $d_2$ are the densities on either side of the discontinuity and $v_1$ and $v_2$ the velocities.

Applying this principle along with the shear rule, we can understand how the density evolves when a traffic light changes from green to red. Suppose that the density is initially constant, meaning that traffic is moving smoothly through the light when the light turns red. This time is represented below when the animation begins. Notice that the motions of the two resulting shock waves describe how the traffic piles up behind the light and how the traffic clears out in front of the light.

We can use the shear rule to predict when a shock wave will appear. Consider the figure below.

What we've seen so far has, for the most part, confirms our intuition for how traffic should flow. Is there anything new we can learn from this model?

At one time or another, we've all been stuck at a poorly timed light where the signal is not green long enough to allow traffic to clear out behind the light before turning back to red. Our theory can help us determine the optimal timing for the signal.

We can determine how long it takes for the traffic to clear behind the light, which tells us how long the signal should stay green to allow this to happen.

At $t=-T_r$, traffic is moving smoothly through the light with a uniform density we denote by $a$. Then the signal turns to red.

We call $t_0$ the time at which $P$ overtakes the shock wave.

As $t$ increases beyond $t_0$, we find the density profile shown below.

Of course, we need $a\lt 1/2$ if we want the traffic to clear; otherwise, the shock wave keeps moving left away from the light. This could be the case if there is an accident on a busy highway at rush hour. Even after the accident is cleared, the backup persists for a long time.

If, for instance, we have $a=1/4$, then $T_g = 3T_r$. In other words, with a density of $1/4$, the signal needs to stay green for 3 times as long as it is red in order for the traffic to clear behind the light. This is the situation illustrated in the animation near the beginning of this section.

This is clearly a simplistic model for traffic flow. We know, for instance, that the assumption that the velocity is a linearly decreasing function of the density is overly optimistic. We also haven't attempted to include reasonable features such as additional lanes or traffic entering or exiting the highway. These problems have all been studied mathematically.

Equations of the form $$ \frac{\partial u}{\partial t} + c(u) \frac{\partial u}{\partial x} = 0, $$ such as the model of traffic flow we studied here, appear frequently in fluid and gas dynamics. In this case, the velocity with which a point on the wave moves depends on the height of the wave, and it's possible to create the type of shock waves that we've seen here. Examples of this in the physical world include the breaking of an ocean wave into a white cap and a sonic boom.

The model presented here, though quite simplistic, allows us to gain insight into these phenomena. For more general equations, the analysis needed to describe the evolution of a wave can be more complicated. However, the specific equation we have studied allows us to use the shear rule as a geometric tool that bypasses some of the analysis. Considering traffic flow also provides an intuitive context for thinking about these issues.

Oh, and I made my flight despite the traffic!