This then is the significance of Arikan's polar codes: they provide encodings for an important class of channels that enable us to transmit information at the greatest possible rate and with an arbitrarily small error rate. ...

Wireless communication is currently transitioning to a new 5G standard that promises, among other advantages, faster speeds. One reason for the improvement, as we'll explain here, is the use of polar codes, which were first introduced by Erdal Arikan in 2009 and which are optimal in a specific information-theoretic sense.

This column is a natural continuation of an earlier column that described Shannon's theory of information. To quickly recap, we considered an information source $X$ to be a set of symbols $\cx$, such as letters in an alphabet, that are generated with a specific frequency $p(x)$. The amount of information generated by this source is measured by the Shannon entropy: $$ H(X) = -\sum_x p(x)\lg p(x). $$ 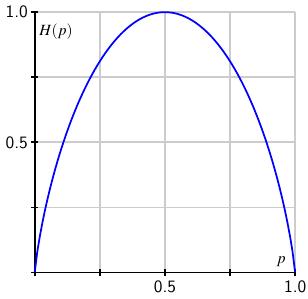 We described $H(X)$ as a measure of the freedom of expression created by the source. If $p=1$, then the source can only generate a string of 0's, so there is only one possible message created by this source; it therefore conveys no information. On the other hand, when $p=1/2$, each symbol is equally possible so any string of 0's and 1's is equally likely. There are many possible messages, each of which is equally likely, so a given message can contain a specific meaning, and we think of this as a high-information source.

Entropy is measured in units of bits per symbol. However, if we imagine that one symbol is generated per unit time, we may also think of entropy--measured in bits per unit time--as measuring the rate at which information is generated. We earlier saw how this interpretation helped us determine the maximum rate at which messages generated by the source could be transmitted over a noiseless channel, a fact that is particularly relevant for us here.

Transmission over a noisy channel

Let's consider a channel $W$ through which we send a symbol $x$ and receive a symbol $y$. Ideally, we receive the same symbol that we send, or at least, the sent symbol can be uniquely recovered from the received symbol. In practice, however, this is not always the case.

For example, the following channel sends symbols from the set $\cx=\{0,1\}$ and receives symbols in $\cy=\{0,1\}$. However, there is a chance that the symbol is corrupted in transmission. In particular, the probability is $p$ that we receive the same symbol we send and $1-p$ that we receive the other symbol. Such a channel is called a binary symmetric channel, which we'll denote as $BSC(p)$.

Our central problem is to understand the maximum rate at which information can be transmitted through such a channel and to find a way to do so that minimizes errors.

To this end, Shannon generalizes the concept of entropy. If $X$ is an information source whose symbols are sent through $W$ and $Y$ is the information source of received symbols, we have joint probabilities $p(x,y)$ that describe the frequency with which we send $x$ and receive $y$. There are also the conditional probabilities $p(y|x)$, the probability that we receive $y$ assuming we have sent $x$, and $p(x|y)$, the probability that we sent $x$ assuming we received $y$. These give conditional entropies $$ \begin{aligned} H(Y|X) = & -\sum_{x,y} p(x,y)\lg p(y|x) \\ H(X|Y) = & -\sum_{x,y} p(x,y)\lg p(x|y). \end{aligned} $$

We are especially interested in $H(X|Y)$, which Shannon calls the channel's equivocation. To understand this better, consider a fixed $y$ and form $$ H(X|y) = -\sum_x p(x|y) \lg p(x|y), $$ which measures our uncertainty in the sent symbol $x$ if we have received $y$. The equivocation is the average of $H(X|y)$ over the received symbols $y$: $$ H(X|Y) = \sum_y p(y) H(X|y). $$ Thinking of entropy as a measure of uncertainty, equivocation measures the uncertainty we have in reconstructing the sent symbols from the received. We can also think of it as the amount of information lost in transmission.

On the other hand, working with $BSC(1/2)$, we are as likely to receive a 0 as we are a 1, no matter which symbol is sent. It is therefore impossible to conclude anything about the sent symbol so all the information is lost. A simple calculation shows that the equivocation $H(X|Y) = H(X)$.

The term capacity is motivated by what Shannon calls the Fundamental Theorem of Noisy Channels:

Suppose $X$ is an information source whose entropy is no more than the capacity of a channel $W$; that is, $H(X) \leq I(W)$. Then the symbols of $X$ can be encoded into $\cx$, the input symbols of $W$, so that the source can be transmitted over the channel with an arbitrarily small error rate. If $H(X) \gt I(W)$, there is no such encoding.

This result may initially appear surprising: how can we send information over a noisy channel, a channel that we know can introduce errors, with an arbitrarily small rate of errors? As an example, consider the channel $W$ with inputs and outputs $\cx=\cy=\{a,b,c,d\}$ and whose transmission probabilities are as shown: 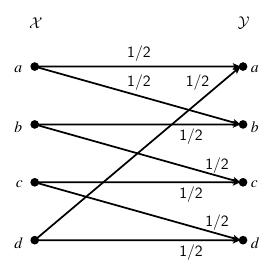 This example shows that we can use a noisy channel to send error-free messages by using a subset of the input symbols. Another technique for reducing the error rate is the strategic use of redundancy. As a simple example, suppose our channel is $BSC(0.75)$; sending every symbol three times allows us to reduce the error rate from 25% to about 14%.

Unfortunately, the proof of Shannon's theorem tells us that an encoding with an arbitrarily small error rate exists, but it doesn't provide a means of constructing it. This then is the significance of Arikan's polar codes: they provide encodings for an important class of channels that enable us to transmit information at the greatest possible rate and with an arbitrarily small error rate. As we will see, the strategy for creating these codes is a creative use of redundancy.

Before describing Arikan's polar codes, let's take a moment to clarify the type of channels $W:\cx\to\cy$ we will be working with. The inputs are $\cx=\{0,1\}$ and we require the channel to be symmetric, which means there is a permutation $\pi:\cy\to\cy$ such that $\pi^{-1} = \pi$ and $p(\pi(y)|1) = p(y|0)$. Such a channel is called a symmetric, binary-input channel. The symmetry condition simply ensures that the result of transmitting 0 is statistically equivalent to transmitting 1.

A typical example is the binary symmetric channel $BSC(p):\{0,1\}\to\{0,1\}$ that we described earlier. The symmetry condition is met with the permutation $\pi$ that simply interchanges 0 and 1.

There are two quantities associated to a symmetric channel $W$ that will be of interest.

Besides the binary symmetric channel, another example of a symmetric, binary-input channel is the binary erasure channel $W:\{0,1\}\to\{0,*,1\}$ as shown below. We think of the received symbol $*$ as an erasure, meaning the symbol was received yet we do not know what it is, so $\ep$ represents the probability that a sent symbol is erased. 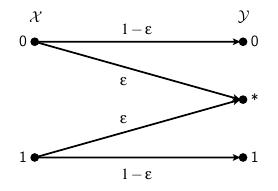 Polar codes are constructed through a recursive process, the first step of which we'll now describe. Beginning with a channel $W$, we'll bundle together two copies of $W$ into a vector channel $W_2:\cx^2\to\cy^2$. Then we'll pull the vector channel apart into two symmetric, binary-input channels $\chan{1}{2}$ and $\chan{2}{2}$ and observe how the capacity of these two channels is distributed.

Let's consider what happens when our channel is a binary erasure channel $BEC(\ep)$.

The capacities of these channels, as a function of $\epsilon$, are shown below. 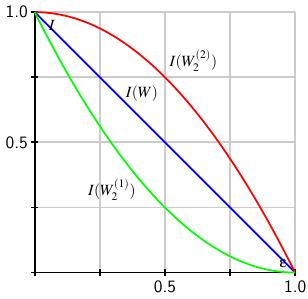 It's worth thinking about why the second channel $\chan{2}{2}$ performs better than the original. While the vector channel $W_2:\cx^2\to\cy^2$ transmits the pair $(u_1,u_2)$, $\chan{2}{2}$ assumes that $u_1$ is transmitted without error so that the received symbol is $((y_1,y_2), u_1)$. Since we know $u_1$ arrives safely, we are essentially transmitting $u_2$ through $W$ twice. It is this redundancy that causes the capacity and reliability to both improve. In practice, we will need to deal with our assumption that $u_1$ is transmitted correctly, but we'll worry about that later.

If we had instead considered a binary symmetric channel $W = BSC(p)$, we find a similar picture: 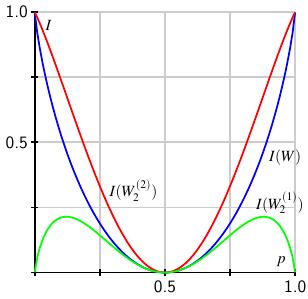 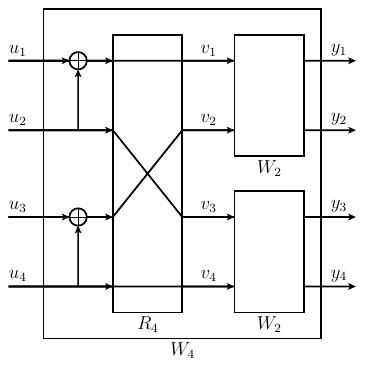 While that may sound a little complicated, the representation of $W_8$ shown below illustrates the underlying simplicity. 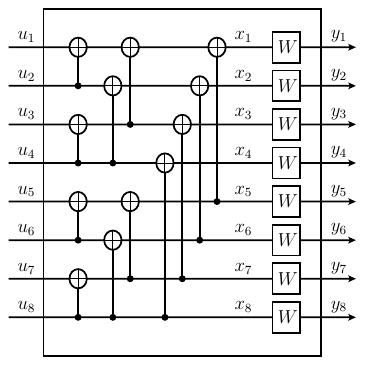 Arikan then proves a remarkable result:

Suppose, for instance, that we begin with a channel whose capacity $I(W) = 0.75$. As we repeat the recursive step, we find that close to 75% of the channels are nearly perfect and close to 25% are nearly useless.

More specifically, with the binary erasure channel $BEC(0.25)$, whose capacity is 0.75, and $N=1024$, the channel capacities are as shown below. About three-quarters of the channels are close to perfect and about one-quarter are close to useless. 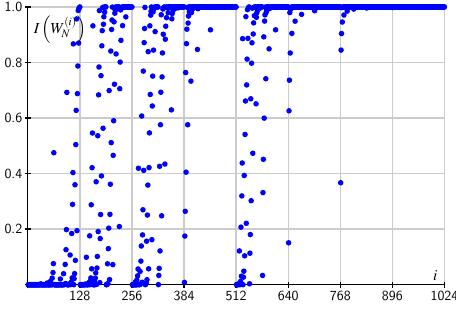 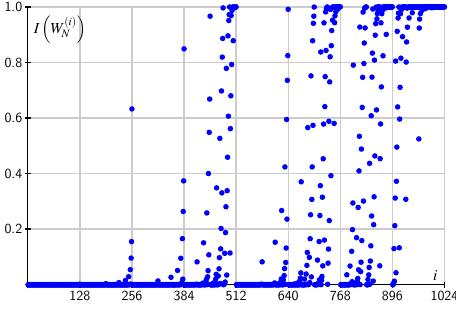 It should be no surprise that the channels $\chan{i}{N}$ with small $i$ are close to useless while the ones with large $i$ are close to perfect. Remember that $\chan{i}{N}$ assumes that the symbols $(u_1,\ldots,u_{i-1})$ are transmitted without error. When $i$ is large, we know that many of the symbols are reliably transmitted so the channel transmits $u_i$ with a lot of redundancy. This redundancy causes an increase in channel capacity $I(\chan{i}{N})$ and a corresponding decrease in our reliability measure $Z(\chan{i}{N})$. 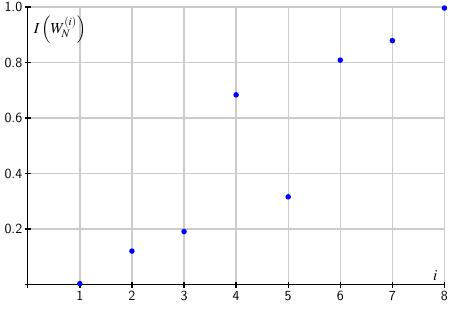 We will choose channels 4, 6, 7, and 8 to transmit data. To do so, we will fix values for $u_1$, $u_2$, $u_3$, and $u_5$ and declare these to be "frozen" (these are polar codes, after all). Arikan shows that any choice for the frozen bits works equally well; this shouldn't be too surprising since their corresponding channels transmit hardly any information. The other symbols $u_4$, $u_6$, $u_7$, and $u_8$ will contain data we wish to transmit. 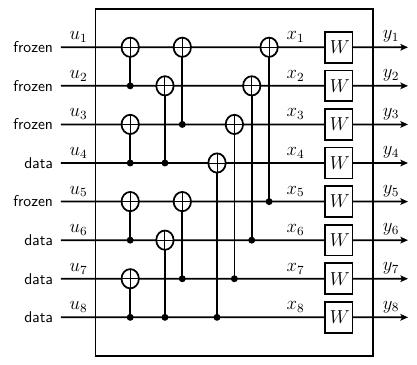 Encoding the data means evaluating the $x_i$ in terms of the $u_j$. As seen in the figure, we perform $N/2=4$ additions $\lg(N) = 3$ times, which illustrates why the complexity of the encoding operation is $O(N\log N)$.

Two observations are important. First, suppose we begin with ${\mathbf u}=(u_1,\ldots,u_N)$ and arrive at $\hat{\mathbf u} = (\hu_1,\ldots,\hu_N)$ after the decoding process. If $\hat{\mathbf u} \neq {\mathbf u}$, we say that a block error has occurred. Arikan shows that, as long as the fraction of non-frozen channels is less than $I(W)$, then the probability of a block error approaches 0 as $N$ grows. This makes sense intuitively: the channels $\chan{i}{N}$ we are using to transmit data are nearly perfect, which means that $Z(\chan{i}{N})\approx 0$. In other words, these channels are highly reliable so the frequency of errors will be relatively small.

The complexity of the encoding and decoding operations means that they can be practically implemented. So now we find ourselves with a practical means to transmit data at capacity $I(W)$ and with an arbitrarily small error rate. We have therefore constructed an encoding that is optimal according to the Fundamental Theorem of Noisy Channels.

Arikan's introduction of polar codes motivated a great deal of further work that brought the theory to a point where it could be usefully implemented within the new 5G standard. One obstacle to overcome was that of simply constructing the codes by determining which channels should be frozen and which should transmit data.

In our example above, we considered a specific channel, a binary erasure channel $W = BSC(\ep)$, for which it is relatively easy to explicitly compute the capacity and reliability of the polarized channels $\chan{i}{N}$. This is an exception, however, as there is not an efficient method for finding these measures for a general channel $W$. Fortunately, later work by Tal and Vardy provided techniques to estimate the reliability of the polarized channels in an efficient way.

Additional effort went into improving the decoding operation, which was, in practice, too slow and error prone to be effective. With this hurdle overcome, polar codes have now been adopted into the 5G framework, only 10 years after their original introduction.