Traditional origami was concerned with taking a single piece of paper and folding it into complex shapes, typically that of an animal or something representational. However, Tomoko Fusè revolutionized the world of origami from a mathematical perspective by popularizing "modular" origami. In modular origami one typically starts with congruent pieces of paper (usually squares) and folds each of these into identical "units." These units are then "woven" together to form highly symmetrical objects such as polyhedra, tilings, or boxes. By using appropriate colors, one can often construct very attractive paper models of a wide variety of polyhedra and tilings with attractive symmetry properties. The creativity involved in unit origami lies in the ingenious panels that have been developed and the way that the panels can be assembled. Fusè's books appear in the "art section" of book stores. Interestingly, for people with some experience in origami, those of Fusè's books which have not been translated into English still can be used because of the universality of the instruction system for folding origami (e.g. symbols for mountain folds, valley folds, etc.).

Parallel with the artistic aspects of origami constructions has been the development of a mathematical theory of origami. This has taken a variety of approaches. The elaborate mathematical theory of what plane figures can be drawn using the traditional Euclidean construction tools of straight edge (unmarked ruler) and compass has an origami companion. What are the shapes that can be constructed using various rules (axioms) concerning the folding of paper? Thomas Hull, Erik Demaine and others have also studied issues related to folding and origami. A major area of interest has been the study of the crease patterns (system of lines on the paper) which can be folded "flat." The mathematics needed involves ideas and methods somewhat different from what was done in the past in attempting to understand how a piece of a plane (a square of origami paper) could be transformed by a geometric transformation, because at the end of the transformation parts of the origami paper touch each other, though they do not interpenetrate other parts of the paper.

Here is an example of a spectacular proven result in this area. Suppose that after having folded a piece of paper flat, one is allowed to make one cut along a straight line with the goal of taking the pieces that are cut off and opening them up. What shaped pieces are possible in this way? The surprising answer is: Any graph consisting of vertices and straight line segments that can be drawn in the plane is possible! For example, one could cut out the shape of something prosaic like the letter "I" or the outline of a butterfly. This result was originally developed by Erik Demaine, Martin Demaine, and Anna Lubiw. Subsequently a different approach to the result was developed by Marshall Bern, Erik Demaine, David Eppstein, and Barry Hayes.

One can make many different kinds of polyhedral objects using modular origami. Here is a sample of origami models of Helena Verrill:

Origami models of polyhedra use approaches where the panels become the faces of the polyhedra, so that the challenge becomes producing panels with different numbers of sides with the same edge lengths. One can also produce polyhedra which are "pyramided." By this I mean that the solids represent convex polyhedra with pyramids erected on each face. (Those are not stellations in the usual sense that geometers use this term.) Other polyhedra like these emphasize the edges of the polyhedron and in essence serve as rigid rod models for the polyhedra. They resemble Leonardo da Vinci's drawings that demonstrated emerging techniques of drawing polyhedra in perspective.

In addition to being beautiful objects, many of the polyhedra that can be created using origami paper suggest mathematical questions of interest. Here is a simple example: One can make a cube out of six unit origami pieces. If these six pieces are all the same color, then one can make only one "type" of colored cube. Suppose that one has three panels of one color and three panels of another color. How many inequivalent cubes can one make?

The diagram below shows an origami construction based on ideas of Thomas Hull and folded by Joe Gilardi. At the mathematical level is a nested collection of tetrahedra folded from dollar bills. Many also see a work of art! 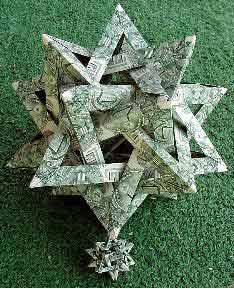 (Used with the permission of Joe Gilardi)