The Princess of Polytopia: Alicia Boole Stott and the 120-cell

Alicia Boole Stott's first article, On certain series of sections of the regular four-dimensional hypersolids, published in 1900, is the basis for this month's feature column...

Fig. 1. A reconstruction of seven of Alicia Boole Stott's models showing 3-dimensional slices of the 120-cell. These slices go from the bottom to the midpoint; then the first six would repeat in reverse order. Photograph by Tony Scarlatos, Stony Brook.

A paradoxical childhood and an unusual hobby

Alicia Boole (1860-1940) grew up in the highest intellectual circles of Victorian England, and in deep penury. Her geneaology was excellent: Boolean Algebra and Mount Everest are named, one for her father George Boole and the other for her maternal uncle, Sir George Everest. But Boole married late and died young, leaving his wife Mary with five daughters, the eldest eight, the youngest six months old, and no money. Alicia, four at the time, was sent to live with relatives. When she rejoined her family they were living "in a poor, dark, dirty, uncomfortable lodging in Marylebone" according to H. S. M. Coxeter, who collaborated with her much later and who contributed a short biography to "Women of Mathematics."

In London the girls, especially the younger, received little or no formal education. Alicia is said to have learned the first two books of Euclid, and no more. But Mary Boole, who corresponded with Darwin and was friends with H. G. Wells, received many visitors, guests who could keep the family acquainted with developments in science and society (or at least those on the mystical fringes of both: Coxeter characterizes them as "a continual stream of cranks"). One of the cranks had a son named Howard Hinton, a brilliant polymath, who courted and married the eldest of the Boole daughters. Hinton was fascinated by four-dimensional geometry. He brought over an elaborate system of wooden cubes he had designed to make it comprehensible, and set his fiancée's younger sisters to work on them. Alicia, then around 18, "gradually began to surpass him in her ability to understand what happens in hyperspace" (Coxeter). She worked out by herself the six regular polytopes (the 4D analogues of our regular polyhedra) and built cardboard models of their sections by parallel 3-planes.

Alicia was building her models just before Edwin A. Abbott's book "Flatland" appeared (1880) and before W. I. Stringham published Regular figures in n-dimensional space in the American Journal of Mathematics (also 1880), but she considered her research her own private hobby. Only towards the end of the century, when her husband (she had married Walter Stott in 1890) showed her that figures published by the Dutch geometer Pieter Schoute closely resembled her own constructions, did she contact a professional mathematician. Schoute became her enthusiastic supporter, and arranged for the publication of her diagrams in the proceedings of the Royal (Netherlands) Academy of Science.

Alicia Boole Stott's first article, On certain series of sections of the regular four-dimensional hypersolids, published in 1900, is the basis for this month's feature column. We will focus on her analysis of one of the "hypersolids," the 120-cell, with boundary consisting of 120 dodecahedra. In particular we will show how to use her diagrams as templates to reconstruct seven of the polyhedral models she had built some twenty years before.

Alicia left Schoute with a complete set of models for the 120-cell and its dual, the 600-cell; these are still on display at the University of Groningen, where Schoute taught, and can be seen as part of Groningen's online display of Mathematical models of surfaces.

Another set of her models is on exhibit at The Faulkes Institute for Geometry, Centre for Mathematical Sciences, Cambridge University. The Cambridge set duplicates most of the two series of 600-cell sections at Groningen (some with different color-coding), but comes with a different set of drawings. Cambridge does not seem to have any models of the 120-cell sections.

A Flatlander's views of the dodecahedron

A 120-cell is sitting in x, y, z, w-space with one of its dodecahedral faces in the 3-plane {w = 0}, and the rest of it in the "upper" half-space where w > 0. Alicia Stott examined its sections by 3-planes {w = c}, parallel to the x, y, z-plane, as c increases from 0 to the height of the 120-cell, approximately 6 units if the dodecahedra have edge length 1. These sections are what would appear if a 120-cell traveled "downwards" on a path intersecting the space we live in.

"Flatland" explains this process by analogy with a 2-dimensional being's perception of a 3-dimensional solid. All the Flatlander can see is the sequence of planar figures produced as the solid drops through Flatland. It is a useful exercise to imagine how a Flatlander would see a dodecahedron passing face-first, vertex-first or edge-first, because the three families of polygons produced are exactly those we will encounter in Alicia's models. 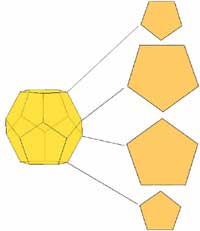 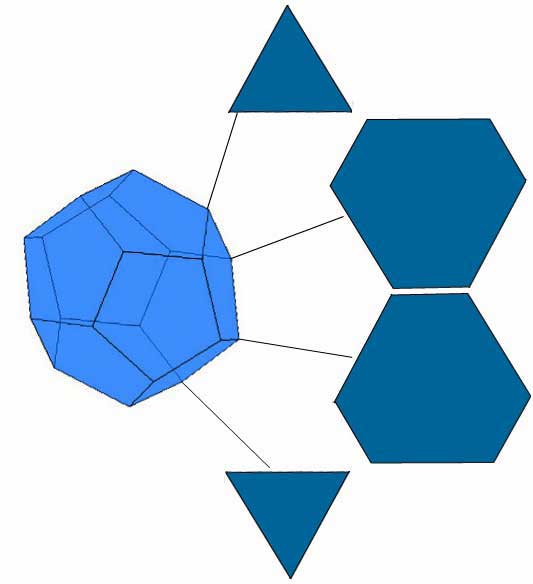 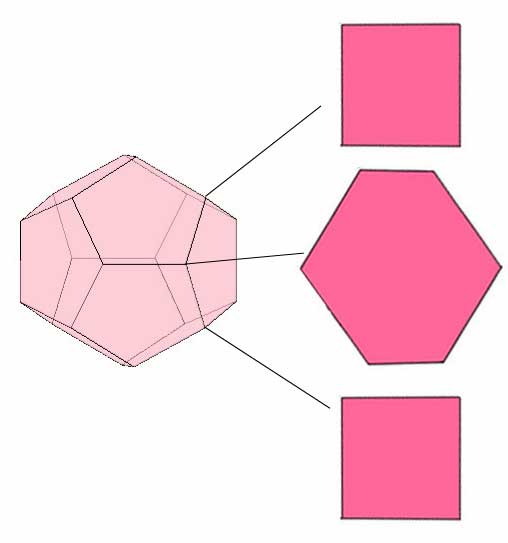 The 120-cell sits for its picture 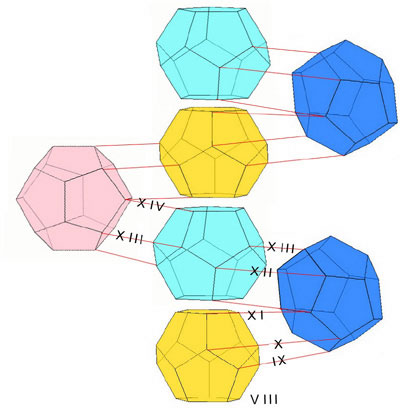 Fig. 3. The 120 dodecahedra constituting the 3-dimensional boundary of the 120-cell can be analyzed into 9 layers containing 1, 12, 20, 12, 30, 12, 20, 12, 1 solids respctively. This picture illustrates how the layers stack up when the polytope is placed with one solid face in x, y, z-space. One representative is shown from each layer, with indications of how the layers are attached. In this orientation of the polytope the top and bottom cells have no 4th-dimensional extent. They appear here as the bottom yellow pentagon and the top turquoise pentagon. Roman numerals refer to diagrams in Alicia Boole Stott's 1900 paper.

Up through the layers

Alicia Boole Stott's 1900 article in the Royal Netherlands Proceedings has 14 diagrams illustrating polygonal configurations; the first seven relate to sections of the 600-cell, and the last seven, numbered VIII to XIV, relate to the 120-cell. These diagrams can be used as templates to assemble models exactly like the ones she made herself and left in Groningen. The only difference is that the Groningen series includes several intermediate sections for which she did not publish diagrams. These diagrams are all exactly to the same scale. They are published in black and white, but I have followed the example of her actual models in color-coding by layer. 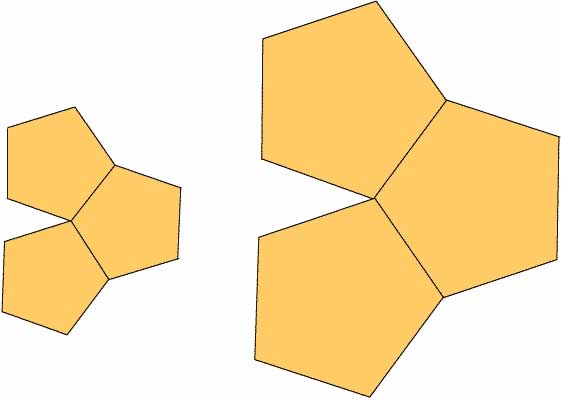 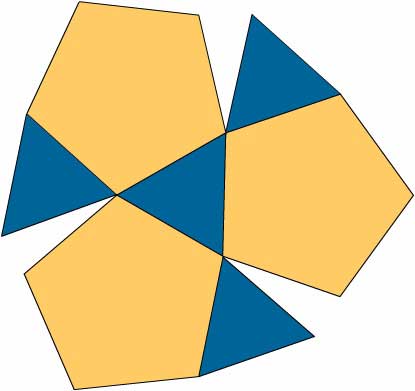 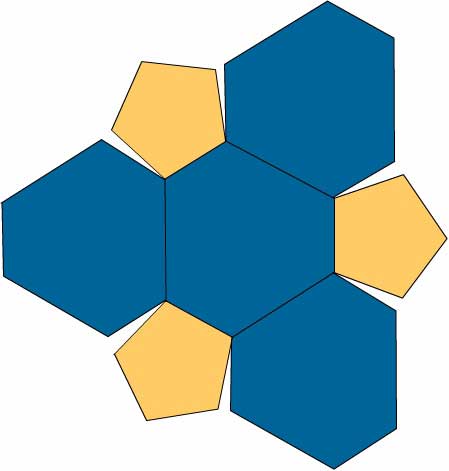 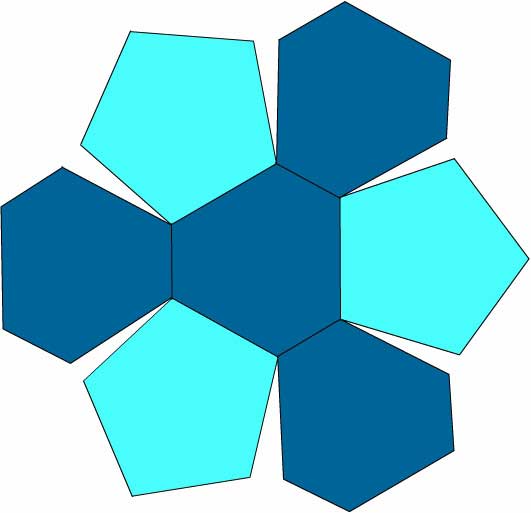 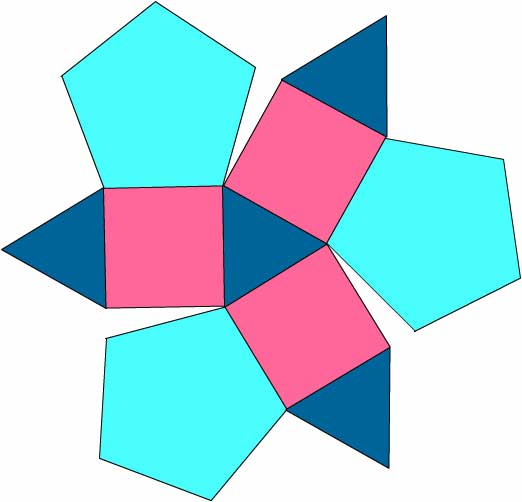 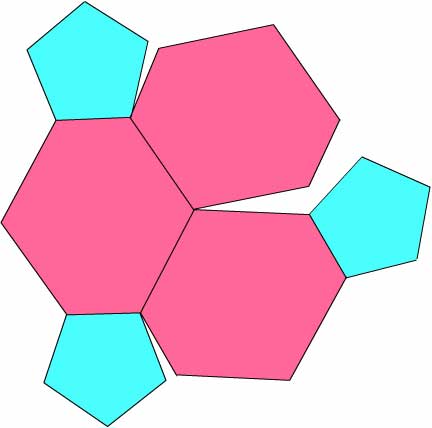 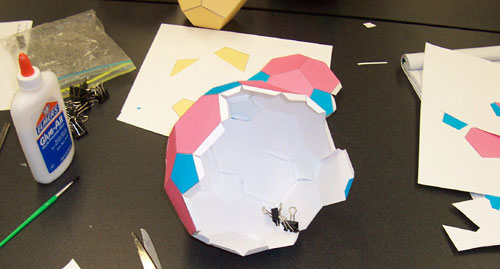 The assembly of Diagram XIV. Note the George Hart method of double tabs, Elmer's glue applied with a brush, and clips.

He wrote her a shorter but more personal biographical notice, and of course everything you need to know about the 120-cell, in

There is more material about Alicia and her brilliant, eccentric family in

and in her nephew Sir Geoffrey Ingram Taylor's "Scientific Diversions," published on pp. 137-148 in

[Added 05/09:] A recent survey of Alicia's life and mathematical contributions:

For a more systematic treatment of the problem of slicing convex bodies in n-space, see Hermann Weyl's The elementary theory of convex polyhedra in

Full references for the articles referred to in the text are: