This article will describe how to represent Kanoodle as an "exact cover problem" and how Donald Knuth implemented an algorithm to find solutions to exact cover problems. We'll also see how to solve Sudoku puzzles using these ideas....

For a birthday gift, one of my children recently received a puzzle called Kanoodle 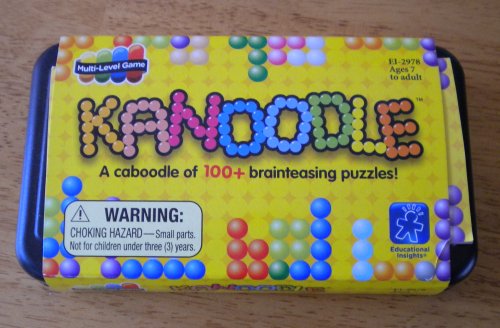 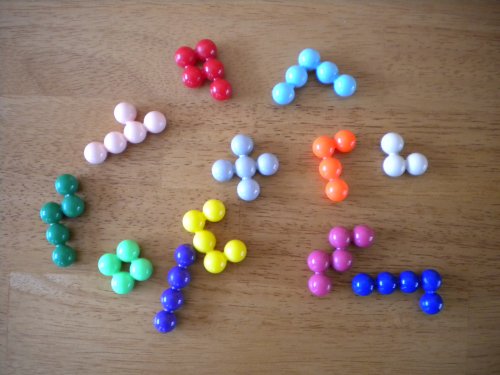 and asks the player to assemble them into a 5 by 11 rectangular grid. 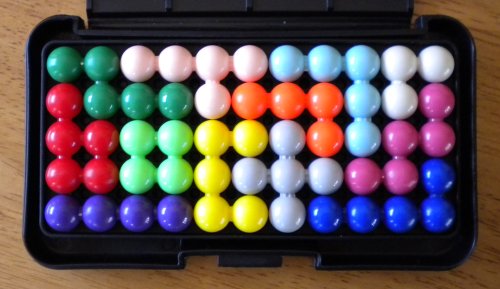 Without assistance, the puzzle is extremely difficult so a booklet includes many starting configurations from which to begin.

After solving the puzzle a few times, I wondered if there was an algorithmic way for finding solutions and soon discovered that there was indeed a very interesting one. This article will describe how to represent Kanoodle as an "exact cover problem" and how Donald Knuth implemented an algorithm to find solutions to exact cover problems. We'll also see how to solve Sudoku puzzles using these ideas.

First, we will describe a generic version of the exact cover problem. Suppose we have a set S and a collection of subsets A1, A2, ..., An. We ask to find a subcollection of our subsets such that each element of S is in exactly one of the subsets.

In the general situation, if we have a subcollection of the sets A1, A2, ..., An, it is relatively easy to determine whether it is a solution. However, it is much more difficult to find solutions. One strategy, admittedly naive, is to consider all possible subcollections of the n sets and test each as a possible solution. The problem is that there are 2n subcollections. As we will see, the exact cover problem for Kanoodle will require us to examine a set S with 67 elements and a collection of 2222 of its subsets. The number of subcollections of the sets is the impossibly large number

Let's now look at an algorithm, called "Algorithm X" by Knuth, for finding solutions to the exact cover problem. It's not particularly sophisticated; indeed Knuth refers to it as "a statement of the obvious trial-and-error approach."

Let's consider our example again, with slightly different notation. Imagine our set S is the set S = {1, 2, 3, 4, 5} and that we have subsets

Remember that we began by attempting to place the element 1 in a subset and we initially chose subset A. We also need to consider, in the same way, placing 1 into subset E and looking for solutions. In other words, from the initial configuration, we have two possible routes we must search for solutions. We will represent this with a search tree, as shown below. Each node in the tree corresponds to a particular configuration of elements and subsets. Each edge is labeled by the subset chosen to be part of the solution we seek.

We have some choice in how we implement the third step in which we choose a column c. In the example above, we have simply chosen the leftmost column at each step. However, the search tree will typically have a smaller number of nodes, which means our algorithm will finish more quickly, if we choose the column c that has the smallest number of entries.

To implement Algorithm X, we will need to be able to remove rows and columns from our matrix, and we will need to be able to put them back in. In addition, we will be working with matrices having a large number of rows and columns and relatively few entries in each row. For instance, when we look for solutions to the Kanoodle problem, our matrix will have 2222 rows and 67 columns. Each row will have no more than 6 entries in it.

We could store this information, in the usual way, as a matrix containing 0's and 1's to indicate an element's membership in a particular set. However, Knuth describes a linked list structure that makes the removal of rows and columns, and their reinsertion, straightforward and requires less storage than simply storing the entire matrix.

We'll begin by describing a doubly-linked list, which is an ordered list of items together with a link from each item to its predecessor and successor. Notice that the list is circularly linked though our figures may not always indicate the links between the left and right elements.

We do this by setting:

Notice that there's no need to change the links out of a. In fact, this makes it very simple to reinsert a. Simply set

Now to implement Algorithm X, we store the columns of the matrix in a doubly-linked list. Remember that individual columns will disappear and reappear as we implement Algorithm X. We will therefore include a special element, which we'll call the root, at the beginning of the list so we'll have some consistent way to refer to the list of columns.

This is an ideal setup for implementing Algorithm X. Each element of the matrix is contained in two doubly-linked lists: one for the row and one for the column. An entire row may be removed by removing each element in the row from its column's list. Columns may be removed by removing the column header from the list of columns. Rows and columns are reinserted by adding them back into the appropriate doubly-linked list.

As the algorithm progresses, the links are continually being modified in a way that led Knuth to call this implementation "Dancing Links."

We can apply Algorithm X to find solutions to the Kanoodle puzzle once we understand how to view the puzzle as an exact cover problem. Remember that we have the following pieces.

A solution is found when:

There will be 67 columns: one for each of the Kanoodle pieces and one for each cell in the 5 by 11 grid. A particular placement of a particular piece has an entry in the columns corresponding to the piece and the cells in the grid in which the piece lies.

The search tree for Kanoodle is huge and there are many solutions. To help the algorithm run faster, I used the symmetry of the board to restrict the possible placements of the piece L. For instance, once we find a solution, we may reflect the board vertically, reflect horizontally, or rotate by a half-turn to obtain another solution. In this way, I assumed that the center of piece L is always in one of the following shaded positions, and I considered each of the possible placements of L separately.

I ran my version of Dancing Links for several hours in a few of these cases and generated many thousands of solutions, a few of which are shown below. However, my poor laptop would need more time if it were to find all of the solutions.

Since I had satisfied my initial urge to find an algorithmic means for generating solutions, and since I was interested in studying the search tree that Dancing Links traversed, I turned my attention to Sudoku puzzles.

Many readers will be familiar with Sudoku puzzles, like the one shown here. There is a nine by nine grid of cells with nine boxes consisting of three by three grids. Initially, some of the cells contain one of nine possible symbols, usually chosen to be integers in the range 1 to 9. A solution is found when

For instance, the solution (there is only one) to the puzzle above is

With the rules explained as above, we will set up an exact cover problem in which a row of our matrix corresponds to a possible way of filling a cell with a symbol. There will be 324 columns:

The matrix is initially set up with one row for each cell whose symbol is given and nine rows for each of the other cells corresponding to the nine different symbols that may be placed in that cell. The puzzle above produces a matrix with 457 rows and 324 columns.

The complexity of the search tree that results from applying Algorithm X reflects how difficult the puzzle is. For instance, the puzzle above is labeled as "Easy," and the search tree in this case is the simplest possible: there is no branching. In other words, once we fill in the symbols given by the puzzle, there is, at every step, a cell whose symbol is uniquely determined. Algorithm X determines this rather quickly: we simply look for columns with a single entry.

By contrast, the following puzzle is labeled as "Evil."

Algorithm X completes the middle row before coming to a branching point: the cell shaded red may be filled in with either a 4 or 5.

If we put a 5 in that cell, the entries in 19 more cells are determined before we come to a dead end (it is impossible to place the symbol 9 in the seventh row):

However, putting a 4 in the red cell leads to a solution with no more branching:

Evil, of course, wears many faces. The following puzzle has a search tree that is shown below and drawn without intermediate nodes to emphasize the branching at levels 30, 31, and 32.