The Octosphericon and the Cretan Maze

The Cretan Maze is an archetypical design -- it dates back some 5000 years...

The octosphericon is a generalization of C. J. Robert's sphericon (see also "The differential geometry of the sphericon" and "Cone with a twist"): the surface of the body obtained by rotating a square about one of its diagonals, slicing the resulting solid along a plane through the axis of rotation, rotating one of the halves 90o with respect to the other and reattaching the two.

Construction of the sphericon: a double cone is sliced, half gets rotated, and the halves are rejoined.

The (prime) octosphericon is constructed in the same way, but with an octagon instead of a square, and with a relative rotation of 45o instead of 90.

The Cretan maze is an archetypical design -- it dates back some 5000 years. On the island of Crete, it came to symbolize the Labyrinth in which the Minotaur was kept. The city of Knossos, where King Minos had his palace, used this design on coins between roughly 500 and 200 BC.

The level sequence of the Cretan maze

The Cretan maze is organized on 8 concentric levels. The path from the outside to the center traverses these levels in an order which is characteristic of the maze. If we number the levels 1 to 8, and represent the outside by 0, then following the path through the maze produces a sequence of numbers, starting with 0 and ending with 8: this is the level sequence of the maze. 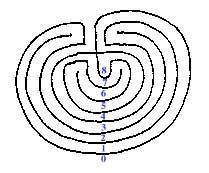 The Cretan maze is just one of a family of mazes which share three properties:

Here, for example, are two others of the 42 eight-level mazes of this type: 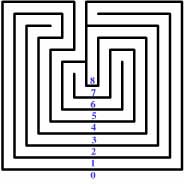 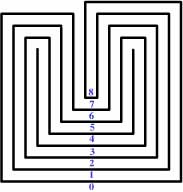 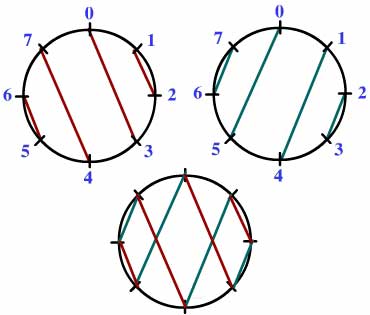 Chord diagrams on the octosphericon, the link to the Cretan maze

An octosphericon may be constructed by joining two copies of this template. The photographs show how to attach tabs (for a paper model) and how to number the sides of the inscribed octagon. Good Luck! 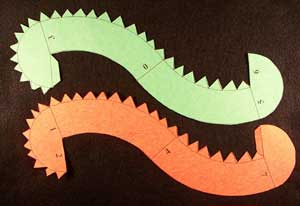 The two halves, with numbers and tabs, for a paper model of the Octosphericon. Note that the tab placements are slightly different. I chose two different colors of construction paper to make the assembly more intelligible. 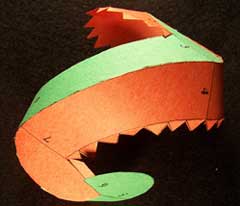 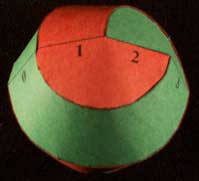 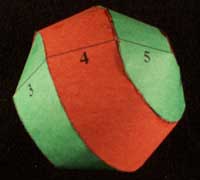 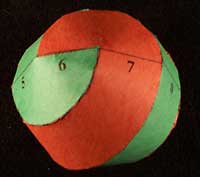 Hermann Kern, Through the Labyrinth: Designs and Meanings over 5,000 Years, Prestel, 2000. [The best and most complete resource on mazes and labyrinths].