Farey Numbers and the Magnetic Cactus

Recent research, where phyllotaxis appears in purely physical systems, gives us new clues as to the fundamental nature of this phenomenon...

Phyllotaxis is the botanical system that regulates the placement of successive leaves along a stem, and successive florets in a compound flower; but the word has also come to stand for a special case: leaves of various plants, seeds of a pine cone, florets in a composite flower (dandelion, daisy, sunflower), scales of a pineapple, are arranged in lattices formed by spirals, left hand and right hand; the numbers of these two types of spirals are almost always consecutive Fibonacci numbers (i.e. consecutive in the sequence 1, 1, 2, 3, 5, 8, 13, 21, ..., which starts with 1, 1 and is determined by the rule that each element is the sum of the two preceding elements).

The most striking aspect of phyllotaxis, certainly from a mathematical point of view, is the appearance of Fibonacci numbers. Since their definition is purely computational, their ubiquity in nature immediately poses two questions. Why do these particular pairs of numbers appear? How are these patterns generated? Sir D'Arcy Wentworth Thompson, the father of mathematical morphology, understood that these question have no biological meaning:

D'Arcy Thompson is silent on what those mathematical reasons might be, but recent research, where phyllotaxis appears in purely physical systems, gives us new clues as to the fundamental nature of this phenomenon.

The first purely mathematical attack on the problem seems to have been in the 1907 book Mathematical and microscopic-anatomical studies of Phyllotaxis ... [6] (in German) by the Dutch mathematical biologist Gerrit van Iterson. He studied what he called "regular arrays of circles on a cylindrical surface." These are packings of identical circular discs around a cylinder so that each is tangent to four nearest neighbors, with no overlapping, and so that their centers are at the vertices of a linear lattice on the cylinder. (The discs were bent to conform to the bending of the cylinder). 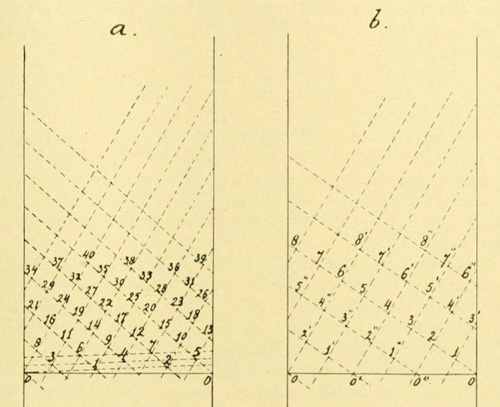 Figure 1 from [6]. It shows two linear lattices on a cylinder. Here the cylinder has been slit along a generator and unrolled in the plane: a lattice becomes two non-parallel sets of regularly spaced lines; their intersections are the lattice points. Lattice a is "simple" because a single "principal spiral" runs through all the lattice points; for lattice b three spirals would be necessary.

Van Iterson considers simple lattices, and among simple lattices those which give the densest packing. These will occur when the two sets of parallel lines have the same spacing, and intersect at a 120o angle. 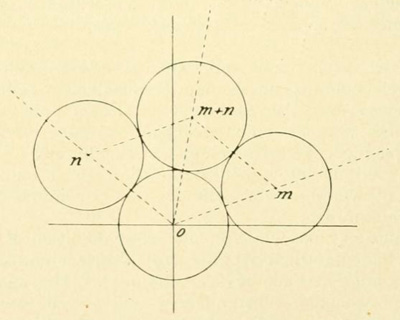 Van Iterson's Figure 11. Neighboring discs in a regular array. Following numbers along the principal spiral, discm is the first to touch disc0; discn is the second. Regularity forces discm+n to be tangent to both discm and discn. Dense packing will occur when, as shown here, discm+n is also tangent to disc0. In that case van Iterson speaks of "three-numbered" contact. Each disc will lie on three "contact spirals," with slopes m, n and m+n.

Finally, van Iterson investigates what happens when the diameter a of the circle is varied with respect to the circumference A of the cylinder. The largest possible value of a is A itself; in that case m = 0, n = 1. The next possibility is m = 1, n = 1, then comes m = 1, n = 2.

If we think of the transition from one packing to the next as driven by compression, then we can understand the move from II to III as circle 3 slipping between 1 and 2 to touch 0 (it can do this in two different directions). If we want to compress one of the forms of III we can slide 4 down between 1 and 3 to touch 0, giving (1,3), or we can slide 5 down between 2 and 3 to touch 0, giving (2,3). Generally, van Iterson showed that the (m,n) tiling (m < n) can compress to (m,m+n) or (n,m+n). This means that the pairs (m,n) that can occur in dense disk tilings of a cylinder correspond to the Farey numbers m/n: this is the listing of the rational numbers between 0 and 1 by layers: layer (-1) contains 0/1 and 1/1; layer 0 contains 1/2; and in general layer k contains all "Farey sums" of nearest-neighbor rationals in the union of the lower-numbered layers; the Farey sum p/q ++ r/s is the rational (p+r)/(q+s). One can check that the (m,n) thus obtained are always relatively prime.

The first few layers of the Farey numbers. Each entry is the Farey sum of the two above it. The solid lines join a number to its "younger" parent (this will be significant later). Figure from [2] L. S. Levitov, Phyllotaxis of Flux Lattices in Layered Superconductors, Phys. Rev. Lett. 66 224, © APS, used with permission.

In theoretical physics: vortices in superconductors

The study of phyllotactic phenomena in physics started in 1991 with theoretical work [2] of L.S.Levitov on arrays of vortices in layered superconductors. He showed there that as the analogue of a compression parameter increased, the vortices would assemble in arrays described by Farey numbers of higher and higher levels. But as he demonstrated later that year [3] for a large class of point-point repulsion potentials (see also [1]), the bifurcations (after the first one) are not symmetrical: the physics privileges forks from the younger parent; the consequence is that in most cases the morphology of an array will fall along the sequence 1/2, 2/3, 3/5, 5/8 of quotients of successive Fibonacci numbers. This is the explanation for their occurrence in physical phenomena, and presumably also in nature: one also encounters the alternate phyllotaxis 2, 3, 4, 7, 11, ..., although much less often than the standard one; other arrangements are extremely rare. 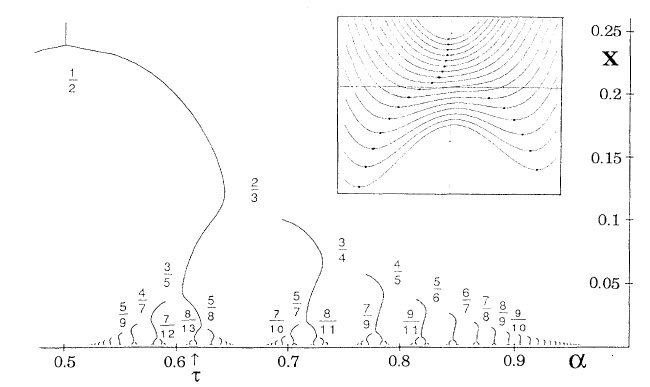 From [2], as above, used with permission. This diagram shows the theoretical history of the vortex array configurations as the "compression" parameter (inversely related to X) is increased. Forking towards the older children is energetically disfavored (the inset shows a configuration parameter tracking the potential minimum near a "pseudo-bifurcation"). The Farey numbers that occur converge in the limit to τ = (√5 -1)/2 = .618033... . (τ and its inverse 1/τ = τ + 1 share the name "the golden mean"). 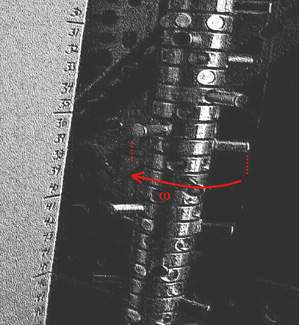 The magnetic cactus is a vertical stack of 50 rings, each 2.2cm in diameter, mounted on ball bearings along a 40cm-long aluminum rod. Each ring bears an iron-neodymium magnet mounted radially with the south pole pointing out; so nearby magnets repel each other. The equilibrium angle ω (Ω below) between nearest-neighbor rings is the main parameter in this study. Image courtesy of Cristiano Nisoli. 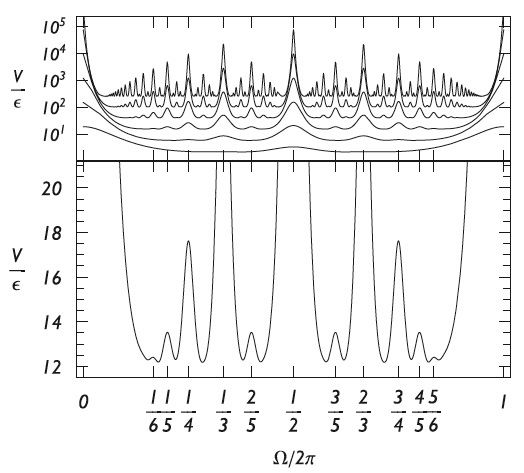 (top) The potential energy of a magnetic cactus of radius R with magnets vertically a units apart and adjacent magnets uniformly separated by an angle Ω, plotted against Ω for (from the bottom) six successively halved values of a/R, starting with a/R = 0.5.
(bottom) The same for the a/R = 0.15 of the experiment. Image courtesy of Cristiano Nisoli.

Note that the potential energy spikes at precisely the Farey number multiples of 2π. Here is how the authors explain the phenomenon: "At low linear particle density (i.e., a/R >> 1), the optimal angular offset that maximizes distance between neighboring particles is Ω = π. However, when a/R drops below 2/√3, the second neighbor in the axial coordinate ... becomes the first neighbor in three-dimensional space, and so Ω = π becomes unfavorable. As density increases further, the angles 2π/3 and 4π/3 also become unfavorable due to third-neighbor interactions and so on, eventually generating a so-called Farey tree of unfavorable angles."

Here are the results of their experiment, run with the a/R = 0.15 of their apparatus: 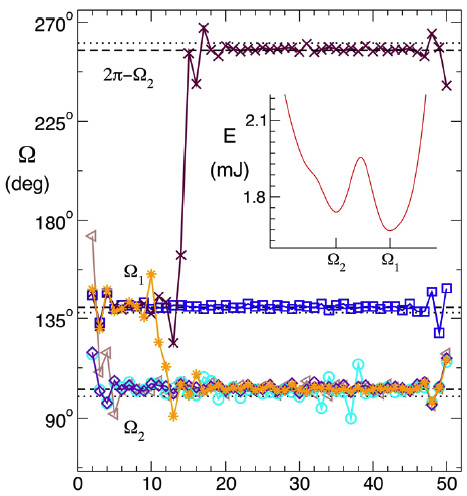 The angular offset between successive magnets in the cactus, measured as more and more magnets are added to the stack. The angles converge rapidly to one of the "phyllotactic angles" Ω1, Ω2 and 2π - Ω2. The first is 2π(1 - τ) = 137.5o, the "golden angle." (Note that 2πτ, which strangely does not appear, would be equally golden in the opposite direction). The second, Ω2 = 99.5o and its complement 2π - Ω2 = 260.5o occur when the system goes towards 3/4 on the second bifurcation, and then tracks through 5/7, 8/11, ... to an alternate limit. Image courtesy of Cristiano Nisoli.

Nisoli and his team use their physical apparatus to investigate the dynamics of such a system. They report several new and very interesting phenomena, unfortunately beyond the scope of this column. Please see [4] for more details.