Penrose Tilings Tied up in Ribbons

How can we create a tiling by Penrose rhombs that will cover the entire plane...

While Penrose tilings are both mathematically interesting and aesthetically pleasing, constructing these tilings is a particularly important issue since they seem to model the structure of quasicrystals appearing in the natural world. As we saw in this space last August, however, constructing Penrose tilings is not easy for the first approach that comes to mind typically fails.

In this column, we will first review some of what was discussed in the previous column and then describe three methods for constructing Penrose tilings, each of which presents a different perspective on the tilings.

For the purposes of this column, we will concentrate on the tilings by Penrose rhombs: 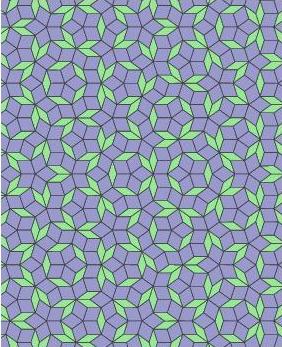 There are two types of tiles, typically called thick and thin rhombs. When placing tiles, we will require that certain matching rules be obeyed: we imagine that the edges of the tiles are decorated with arrows, as shown below, and we require that the arrows on adjacent edges agree in both number and direction.

With this additional requirement, we saw that Penrose tilings admit no translational symmetry. This means that there is no fundamental unit that can reconstruct the tiling through repetition in the way that, say, the tiling below can be reconstructed from one of the yellow parallelograms. 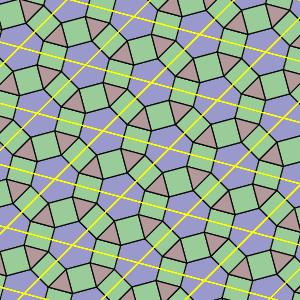 In spite of the fact that Penrose tilings have no translational symmetries, they do exhibit a remarkable structure. If we focus attention on half-rhombs, as shown below,

the matching rules force every half-rhomb to belong to one of the following patches:

In this way, the half-rhombs may be combined, through a process known as composition, to obtain new half-rhombs whose linear dimensions are scaled by a factor of the golden ratio

, one of mathematics' revered numbers.

There is, of course, the reverse process of decomposition, in which a half-rhomb is replaced by smaller half-rhombs. 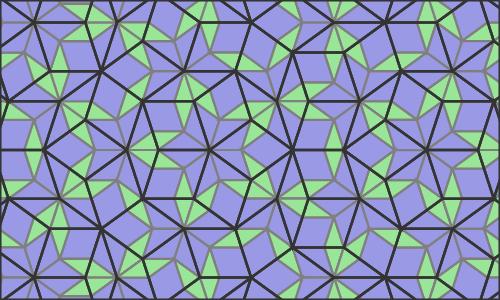 Composition applied to the inflated tiling creates its own inflated tiling, and, continuing in this way, we see that there is a hierarchy of tilings, each of which is the inflated tiling of its predecessor. This hierarchy imposes strong constraints on how we may place the tiles. More specifically, we saw that simply placing tiles according to the matching rules usually leads to a situation in which a patch of tiles cannot be extended further as happens in the following figure at the location indicated by the red dot. 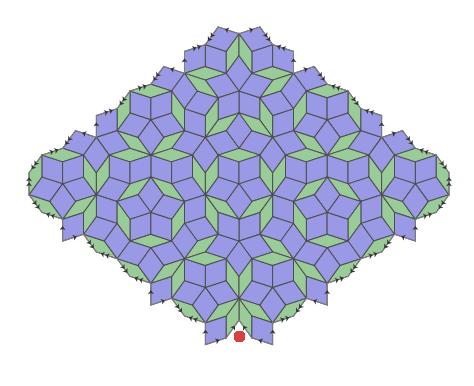 The question remains: how can we create a tiling by Penrose rhombs that will cover the entire plane? We will now describe three different methods, each due to de Bruijn.

The first method, known as updown generation, is demonstrated with an example.

It should be apparent why this method is called updown generation: We first move up in the inflation hierarchy as we make choices about composing half-rhombs, then use decomposition to move back down the inflation hierarchy. Of course, we have made a finite sequence of choices here and consequently have covered only a finite portion of the plane. If we had continued so as to create an infinite sequence of composition choices, we would most likely have filled the entire plane. (There are some infinite sequences that cover only a portion of the plane, say, a half-plane, but these sequences are the exceptions.)

You may feel a bit dissatisfied with updown generation: as we move up the inflation hierarchy, we cover larger and larger portions of the plane but, with only finitely many steps, never the entire plane. You may ask, "Is there a way to construct a tiling using just a finite amount of information?" De Bruijn's pentagrids provide such a method.

For instance, the pentagrid on the left generates the tiling on the right. 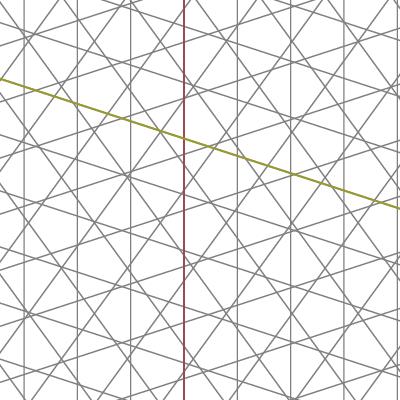 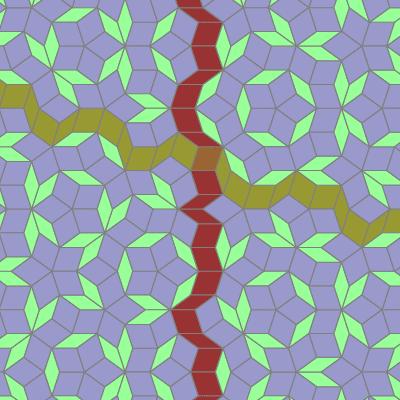 Perhaps more remarkably, de Bruijn has proven that every Penrose tiling results from a pentagrid.

. In other words, it takes about 60% more thick rhombs than thin ones to construct a Penrose tiling. (Of course, there are infinitely many rhombs of both types; the precise meaning of the previous sentence will become clear presently.)

One consequence is that Penrose tilings are non-periodic, a fact that we determined through other means in August's column. In a periodic tiling with two tiles, the ratio of the number of one type to another must be a rational number equal to the ratio in a single fundamental unit.

Out of the shadows

There is an alternative point of view on the pentagrid method, usually called the projection method, that enables us to construct a Penrose tiling from a pentagrid as the "shadow" of a five-dimensional lattice. To see this, we will need to consider the five-dimensional space consisting of points with five real coordinates

. Don't worry if you can't see this five-dimensional space; we can draw some two-dimensional figures to help think about it.

The point is that we may now forget about the original pentagrid and simply view the tiling as arising from the projection, or the "shadows," of the chosen lattice points onto the plane

Incidentally, we have used a two-dimensional analogy to illustrate the projection method in the sequence of figures shown above. The slope of the line was chosen to be

, and the projection method results in a tiling of the real line, called a Fibonacci tiling, by a pair of one-dimensional tiles, sometimes called short (green) and long (blue) tiles. Fibonacci tilings are interesting in their own right for they are nonperiodic and appear naturally in Penrose tilings.

The methods of constructing tilings presented here have rather distinctive flavors. Updown generation shows how a small portion of a tiling may be grown to produce larger and larger portions. At any step of the process though, the entire tiling has not yet been determined. In contrast, the pentagrid method, and the related projection method, gives the complete structure of the tiling at a glance.